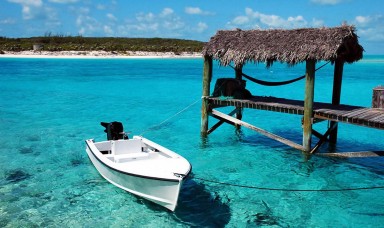 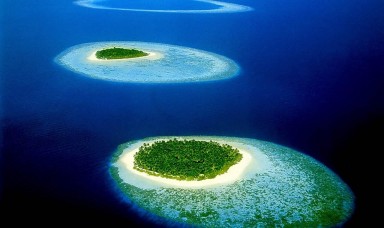 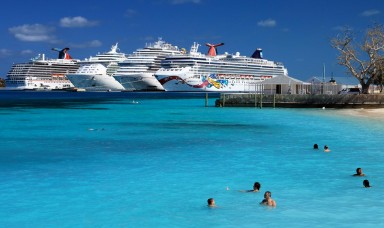 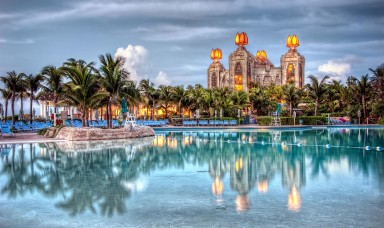 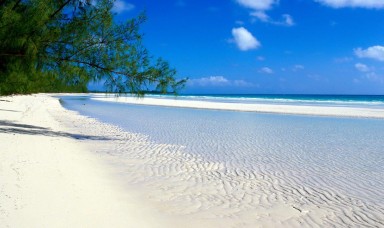 The Bahamas , officially the Commonwealth of the Bahamas, is a country consisting of more than 700 islands, cays, and islets in the Atlantic Ocean; north of Cuba and Hispaniola (the Dominican Republic and Haiti); northwest of the Turks and Caicos Islands; southeast of the U.S. state of Florida and east of the Florida Keys. Its capital is Nassau on the island of New Providence. The designation of “Bahamas” can refer to either the country or the larger island chain that it shares with the Turks and Caicos Islands. As stated in the mandate/manifesto of the Royal Bahamas Defence Force, the Bahamas territory encompasses 470,000 km2 (180,000 sq mi) of ocean space.

The closest island to the United States is Bimini, which is also known as the gateway to the Bahamas. The island of Abaco is to the east of Grand Bahama. The southeasternmost island is Inagua. The largest island is Andros Island. Other inhabited islands include Eleuthera, Cat Island, Long Island, San Salvador Island, Acklins, Crooked Island, Exuma and Mayaguana. Nassau, capital city of the Bahamas, lies on the island of New Providence.

All the islands are low and flat, with ridges that usually rise no more than 15 to 20 m (49 to 66 ft). The highest point in the country is Mount Alvernia (formerly Como Hill) on Cat Island. It has an altitude of 63 metres (207 ft).

To the southeast, the Turks and Caicos Islands, and three more extensive submarine features called Mouchoir Bank, Silver Bank, and Navidad Bank, are geographically a continuation of the Bahamas, but not part of the Commonwealth of the Bahamas.

The districts of the Bahamas provide a system of local government everywhere except New Providence (which holds 70% of the national population), whose affairs are handled directly by the central government. In 1996, the Bahamian Parliament passed “The Local Government Act” to facilitate the establishment of Family Island Administrators, Local Government Districts, Local District Councillors, and Local Town Committees for the various island communities. The overall goal of this act is to allow the various elected leaders to govern and oversee the affairs of their respective districts without the interference of Central Government. In total, there are 38 districts, with elections being held every five years. There are also one hundred and ten Councillors and two hundred and eighty-one Town Committee members to correspond with the various districts.

Each Councillor or Town Committee member is responsible for the proper use of public funds for the maintenance and development of their constituency.

One of the most prosperous countries in the West Indies, The Bahamas relies on tourism to generate most of its economic activity. Tourism as an industry not only accounts for over 60 percent of the Bahamian GDP, but provides jobs for more than half the country’s workforce. After tourism, the next most important economic sector is financial services, accounting for some 15 percent of GDP.

The government has adopted incentives to encourage foreign financial business, and further banking and finance reforms are in progress. The government plans to merge the regulatory functions of key financial institutions, including the Central Bank of The Bahamas (CBB) and the Securities and Exchange Commission. The Central Bank administers restrictions and controls on capital and money market instruments. The Bahamas International Securities Exchange currently consists of 19 listed public companies. Reflecting the relative soundness of the banking system (mostly populated by Canadian banks), the impact of the global financial crisis on the financial sector has been limited.

The economy has a very competitive tax regime. The government derives its revenue from import tariffs, license fees, property and stamp taxes, but there is no income tax, corporate tax, capital gains tax, value-added tax (VAT), or wealth tax. Payroll taxes fund social insurance benefits and amount to 3.9% paid by the employee and 5.9% paid by the employer. In 2010, overall tax revenue as a percentage of GDP was 17.2%.

By the terms of GDP per capita, the Bahamas is one of the richest countries in the Americas.

In the less developed outer islands, handicrafts include basketry made from palm fronds. This material, commonly called “straw”, is plaited into hats and bags that are popular tourist items. Another use is for so-called “Voodoo dolls,” even though such dolls are the result of the American imagination and not based on historic fact.

A form of folk magic (obeah) is practiced by some Bahamians but, mostly the Haitian-Bahamian community, mainly in the Family Islands (out-islands) of The Bahamas. The practice of obeah is, however, illegal in the Bahamas and punishable by law.

Junkanoo is a traditional Bahamian street parade of music, dance, and art held in Nassau (and a few other settlements) every Boxing Day, New Year’s Day. Junkanoo is also used to celebrate other holidays and events such as Emancipation Day.

Regattas are important social events in many family island settlements. They usually feature one or more days of sailing by old-fashioned work boats, as well as an onshore festival.

There are many dishes that are part of Bahamian cuisine and some settlements have festivals associated with the traditional crop or food of that area, such as the “Pineapple Fest” in Gregory Town, Eleuthera or the “Crab Fest” on Andros. Other significant traditions include story telling.

Bahamians have created a rich literature of poetry, short stories, plays, and short fictional works. Common themes in these works are (1) an awareness of change, (2) a striving for sophistication, (3) a search for identity, (4) nostalgia for the old ways, and (5) an appreciation of beauty. Some contributing writers are Susan Wallace, Percival Miller, Robert Johnson, Raymond Brown, O.M. Smith, William Johnson, Eddie Minnis, Winston Saunders, and many others.

Bahamas culture is rich with beliefs, traditions, folklore and legend. The most well-known folklore and legends in Bahamas includes Lusca in Andros Bahamas, Pretty Molly on Exuma Bahamas, The Chickcharnies of Andro Bahamas, and the Lost City of Atlantis on Bimini Bahamas.