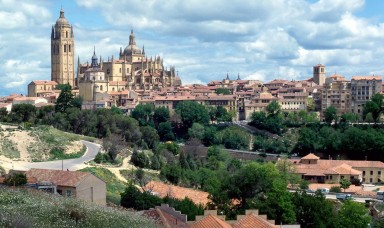 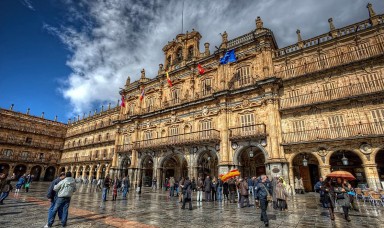 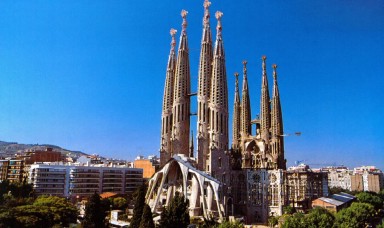 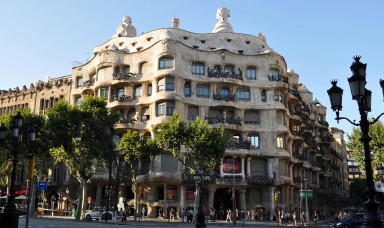 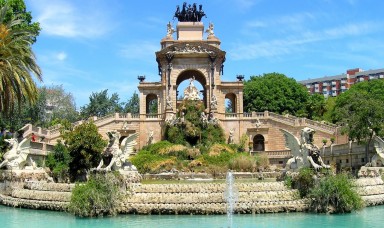 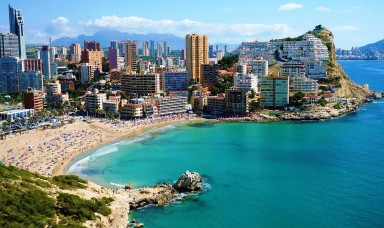 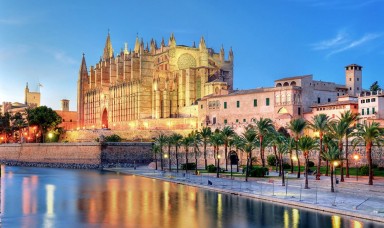 Spain (/ˈspeɪn/; Spanish: España [esˈpaɲa] ( listen)), officially the Kingdom of Spain (Spanish: Reino de España), [esˈpaɲa] is a sovereign state and a member state of the European Union. It is located on the Iberian Peninsula in southwestern Europe. Its mainland is bordered to the south and east by the Mediterranean Sea except for a small land boundary with Gibraltar; to the north and north east by France, Andorra, and the Bay of Biscay; and to the west and northwest by Portugal and the Atlantic Ocean. It is one of three countries (Morocco, France) to have both Atlantic and Mediterranean coastlines. Spain’s 1,214 km (754 mi) border with Portugal is the longest uninterrupted border within the European Union.

On the west, Spain borders Portugal; on the south, it borders Gibraltar (a British overseas territory) and Morocco, through its exclaves in North Africa (Ceuta, Melilla, and Peñón de Vélez de la Gomera). On the northeast, along the Pyrenees mountain range, it borders France and the tiny principality of Andorra. Along the Pyrenees in Girona, a small exclave town called Llívia is surrounded by France.

In 2008 the population of Spain officially reached 46 million people, as recorded by the Padrón municipal. [esˈpaɲa] Spain’s population density, at 91/km² (235/sq mi), is lower than that of most Western European countries and its distribution across the country is very unequal. With the exception of the region surrounding the capital, Madrid, the most populated areas lie around the coast. The population of Spain more than doubled since 1900, when it stood at 18.6 million, principally due to the spectacular demographic boom in the 1960s and early 1970s. [esˈpaɲa]

Native Spaniards make up 88% of the total population of Spain. After the birth rate plunged in the 1980s and Spain’s population growth rate dropped, the population again trended upward, based initially on the return of many Spaniards who had emigrated to other European countries during the 1970s, and more recently, fuelled by large numbers of immigrants who make up 12% of the population. The immigrants originate mainly in Latin America (39%), North Africa (16%), Eastern Europe (15%), and Sub-Saharan Africa (4%). [esˈpaɲa] In 2005, Spain instituted a three-month amnesty program through which certain hitherto undocumented aliens were granted legal residency.

In 2008, Spain granted citizenship to 84,170 persons, mostly to people from Ecuador, Colombia and Morocco. [esˈpaɲa] A sizeable portion of foreign residents in Spain also comes from other Western and Central European countries. These are mostly British, French, German, Dutch, and Norwegian. They reside primarily on the Mediterranean coast and the Balearic islands, where many choose to live their retirement or telecommute.

Substantial populations descended from Spanish colonists and immigrants exist in other parts of the world, most notably in Latin America. Beginning in the late 15th century, large numbers of Iberian colonists settled in what became Latin America and at present most white Latin Americans (who make up about one-third of Latin America’s population) are of Spanish or Portuguese origin. In the 16th century perhaps 240,000 Spaniards emigrated, mostly to Peru and Mexico. [esˈpaɲa] They were joined by 450,000 in the next century. [esˈpaɲa] Between 1846 and 1932 it is estimated that nearly 5 million Spaniards emigrated to the Americas, especially to Argentina and Brazil. [esˈpaɲa] Approximately two million Spaniards migrated to other Western European countries between 1960 to 1975. During the same period perhaps 300,000 went to Latin America. [esˈpaɲa]

Spain’s capitalist mixed economy is the thirteenth largest worldwide and the fifth largest in the European Union, as well as the Eurozone’s fourth largest.

The centre-right government of former prime minister José María Aznar worked successfully to gain admission to the group of countries launching the euro in 1999. Unemployment stood at 7.6% in October 2006, a rate that compared favorably to many other European countries, and especially with the early 1990s when it stood at over 20%. Perennial weak points of Spain’s economy include high inflation, [esˈpaɲa] a large underground economy, [esˈpaɲa] and an education system which OECD reports place among the poorest for developed countries, together with the United States and UK. [esˈpaɲa]

By the mid-1990s the economy had recommmenced the growth that had been disrupted by the global recession of the early 1990s. The strong economic growth helped the government to reduce the government debt as a percentage of GDP and Spain’s high unemployment began to drop steadily. With the government budget in balance and inflation under control Spain was admitted into the Eurozone in 1999.

Since the 1990s some Spanish companies have gained multinational status, often expanding their activities in culturally close Latin America. Spain is the second biggest foreign investor there, after the United States. Spanish companies too have expanded into Asia, especially China and India. [esˈpaɲa] This early global expansion is a competitive vantage over its competitors and European neighbors. The reason may primarily due to the booming interest toward Spanish language and culture in Asia and Africa, but also a corporate culture that learned to take risks in unstable markets.

Culturally, Spain is a Western country. Because of the great strength of the Roman heritage in almost every aspect of Spanish life, Spain is often described as a Latin country. Nevertheless, there have been many influences on many aspects of Spanish life, from art and architecture to cuisine and music, from many countries across Europe and from around the Mediterranean, through its long history.

The number of UNESCO World Heritage Sites in Spain, 44, is exceeded only by the number in Italy. [esˈpaɲa]