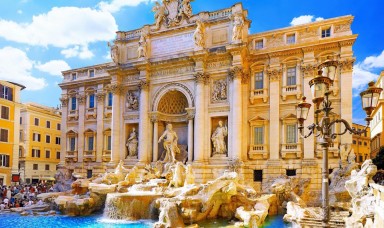 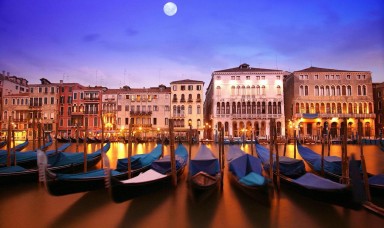 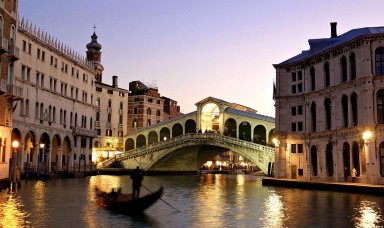 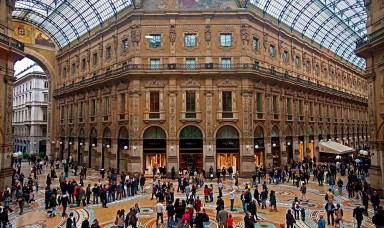 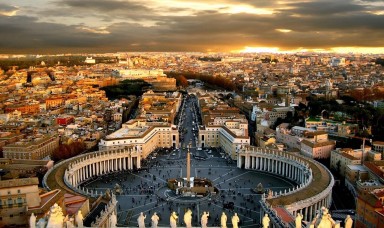 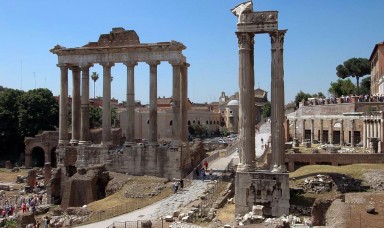 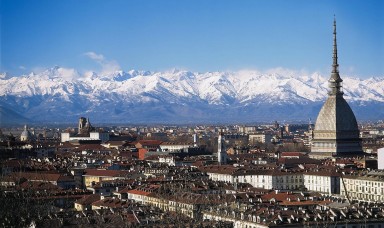 Italy, officially the Italian Republic (Italian: Repubblica italiana), is a unitary parliamentary republic in Southern Europe. To the north, Italy borders France, Switzerland, Austria, and Slovenia, and is approximately delimited by the Alpine watershed, enclosing the Po Valley and the Venetian Plain. To the south, it consists of the entirety of the Italian Peninsula and the two biggest Mediterranean islands of Sicily and Sardinia, in addition to many other smaller islands. The sovereign states of San Marino and the Vatican City are enclaves within Italy, while Campione d’Italia is an Italian exclave in Switzerland. Italy covers an area of 301,338 km2 (116,347 sq mi) and has a largely temperate climate. With 59.7 million inhabitants, it is the fifth most populous country in Europe. Italy is also the fourth-largest economy on the European Union, third in the Eurozone and ninth in the world.

Italy is located in Southern Europe and comprises the boot-shaped Italian Peninsula and a number of islands including the two largest, Sicily and Sardinia. It lies between latitudes 35° and 47° N, and longitudes 6° and 19° E.

The country is situated at the meeting point of the Eurasian Plate and the African Plate, leading to considerable seismic and volcanic activity. There are 14 volcanoes in Italy, four of which are active: Etna (the traditional site of Vulcan’s smithy), Stromboli, Vulcano and Vesuvius. Vesuvius is the only active volcano in mainland Europe and is most famous for the destruction of Pompeii and Herculanum. Several islands and hills have been created by volcanic activity, and there is still a large active caldera, the Campi Flegrei north-west of Naples.

Although the country comprises the Italian peninsula and most of the southern Alpine basin, some of Italy’s territory extends beyond the Alpine basin and some islands are located outside the Eurasian continental shelf. These territories are the comuni of: Livigno, Sexten, Innichen, Toblach (in part), Chiusaforte, Tarvisio, Graun im Vinschgau (in part), which are all part of the Danube’s drainage basin, while the Val di Lei constitutes part of the Rhine’s basin and the islands of Lampedusa and Lampione are on the African continental shelf.

Italy has 60,626,442 inhabitants according to 1 January 2011 municipal records (Anagrafe). Its population density, at 201/km² (520/sq. mile), is higher than that of most Western European countries. However the distribution of the population is widely uneven. The most densely populated areas are the Po Valley (that accounts for almost a half of the national population) and the metropolitan areas of Rome and Naples, while vast regions such as the Alps and Apennines highlands, the plateaus of Basilicata and the island of Sardinia are very sparsely populated.

The population of Italy almost doubled during the 20th century, but the pattern of growth was extremely uneven because of large-scale internal migration from the rural South to the industrial cities of the North, a phenomenon which happened as a consequence of the Italian economic miracle of the 1950–1960s. In addition, after centuries of net emigration, from the 1980s Italy has experienced large-scale immigration for the first time in modern history. According to the Italian government, there were 4,570,317 foreign residents in Italy as of January 2011.

High fertility and birth rates persisted until the 1970s, after which they start to dramatically decline, leading to rapid population aging. At the end of the 2000s (decade), one in five Italians was over 65 years old. However, thanks mainly to the massive immigration of the last two decades, in recent years Italy experienced a significant growth in birth rates. The total fertility rate has also climbed from an all-time low of 1.18 children per woman in 1995 to 1.41 in 2008. The TFR is expected to reach 1.6 – 1.8 in 2030.

Italy is subdivided into 20 regions (regioni, singular regione), five of these regions having a special autonomous status that enables them to enact legislation on some of their local matters. The country is further divided into 110 provinces (province) and 8,100 municipalities (comuni). There are also 15 metropolitan cities (città metropolitane), established in 2009, but this administrative division is not yet operational.

After World War II, Italy was rapidly transformed from an agriculture based economy into one of the world’s most industrialized nations and a leading country in world trade and exports. It is a developed country, with the world’s 8th highest quality of life in 2005 and the 25th Human Development Index. In spite of the recent global economic crisis, Italian per capita GDP at purchasing power parity remains approximately above to the EU average, while the unemployment rate (8.5%) stands as one of the EU’s lowest. The country is well known for its influential and innovative business economic sector, an industrious and competitive agricultural sector (Italy is the world’s largest wine producer), and for its creative and high-quality automobile, industrial, appliance and fashion design.

Italy has a smaller number of global multinational corporations than other economies of comparable size, but there is a large number of small and medium-sized enterprises, notoriously clustered in several industrial districts, which are the backbone of the Italian industry. This has produced a manufacturing sector often focused on the export of niche market and luxury products, that if on one side is less capable to compete on the quantity, on the other side is more capable of facing the competition from China and other emerging Asian economies based on lower labour costs, with higher quality products.

The country was the world’s 7th largest exporter in 2009. Italy’s closest trade ties are with the other countries of the European Union, with whom it conducts about 59% of its total trade. Its largest EU trade partners, in order of market share, are Germany (12.9%), France (11.4%), and Spain (7.4%). Finally, tourism is one of the fastest growing and profitable sectors of the national economy: with 43.6 million international tourist arrivals and total receipts estimated at $38.8 billion in 2010, Italy is both the fifth most visited country and highest tourism earner in the world.

Despite these important achievements, the Italian economy today suffers from many and relevant problems. After a strong GDP growth of 5–6% per year from the 1950s to the early 1970s, and a progressive slowdown in the 1980s and 1990s, the last decade’s average annual growth rates poorly performed at 1.23% in comparison to an average EU annual growth rate of 2.28%. The stagnation in economic growth, and the political efforts to revive it with massive government spending from the 1980s onwards, eventually produced a severe rise in public debt. According to the EU’s statistics body Eurostat, Italian public debt stood at 116% of GDP in 2010, ranking as the second biggest debt ratio after Greece (with 126.8%).

However, the biggest part of Italian public debt is owned by national subjects, a major difference between Italy and Greece. In addition, Italian living standards have a considerable north-south divide. The average GDP per capita in the north exceeds by far the EU average, while many regions of Southern Italy are dramatically below. Italy has often been referred the sick man of Europe, characterised by economic stagnation, political instability and problems in pursuing reform programs. By the end of August 2013, unemployment reached 12.2% (40.1% for youths).

More specifically, Italy suffers from structural weaknesses because of its geographical conformation and the lack of raw materials and energy resources: in 2006 the country imported more than 86% of its total energy consumption (99.7% of the solid fuels, 92.5% of oil, 91.2% of natural gas and 15% of electricity). The Italian economy is weakened by the lack of infrastructure development, market reforms and research investment, and also high public deficit. In the Index of Economic Freedom 2008, the country ranked 64th in the world and 29th in Europe, the lowest rating in the Eurozone. While Italy received development assistance from the European Union until recently, in 2011 the country was the third net contributor to European Budget after Germany and France, and despite its recent economic crisis did not receive any bailout program from the EU from any of its financial mechanisms (ESN) while providing its full support to these financial programs.

The country has an inefficient state bureaucracy, low property rights protection and high levels of corruption, heavy taxation and public spending that accounts for about half of the national GDP. In addition, the most recent data show that Italy’s spending in R&D in 2006 was equal to 1.14% of GDP, below the EU average of 1.84% and the Lisbon Strategy target of devoting 3% of GDP to research and development activities. According to the Confesercenti, a major business association in Italy, organized crime in Italy represented the “biggest segment of the Italian economy”, accounting for €90 billion in receipts and 7% of Italy’s GDP.

Moreover, the big gap between the wealthy Centre-North of country and the poorer South, remains unresolved, following several decades of failing politics to develop the Mezzogiorno. Today, while the North and the Centre of the country have a GDP per capita which is about 115-125% of EU average, with the North being one of the industrial cores of Europe, the South has a GDP per capita which is just the 70% of EU average. South Italy also sees bigger levels of unemployment, corruption, organised crime and “black economy”, and as well its economy depends more on State-funded industry or on State-related jobs, rather than private enterprises.

For centuries divided by politics and geography until its eventual unification in 1861, Italy has developed a unique culture, shaped by a multitude of regional customs and local centres of power and patronage. During the Middle Ages and the Renaissance, a number of magnificent courts competed for attracting the best architects, artistis and scholars, thus producing an immense legacy of monuments, paintings, music and literature.

Italy has more UNESCO World Heritage Sites (49) than any other country in the world, and has rich collections of art, culture and literature from many different periods. The country has had a broad cultural influence worldwide, also because numerous Italians emigrated to other places during the Italian diaspora. Furthermore, the nation has, overall, an estimated 100,000 monuments of any sort (museums, palaces, buildings, statues, churches, art galleries, villas, fountains, historic houses and archaeological remains).