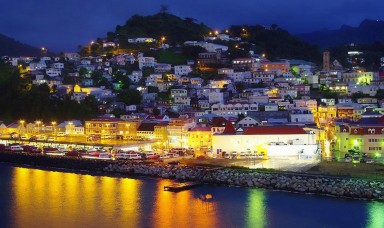 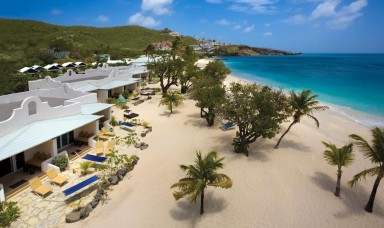 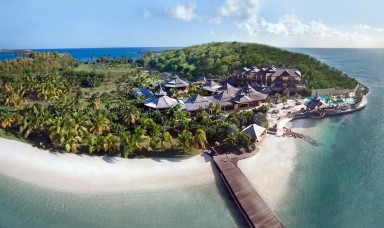 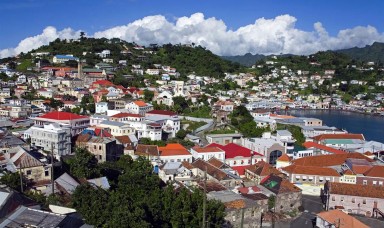 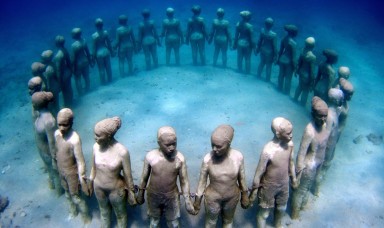 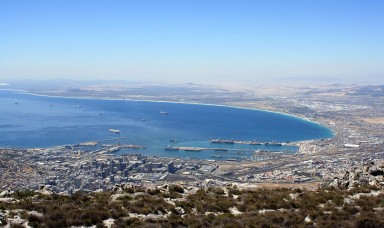 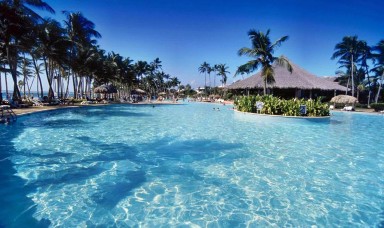 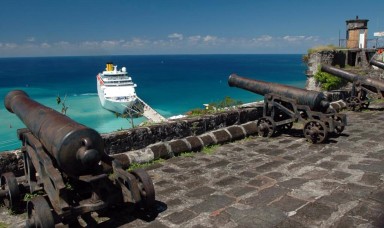 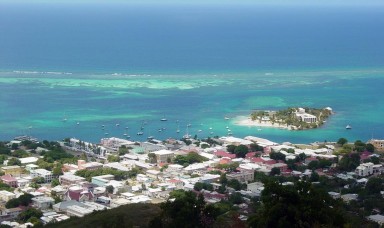 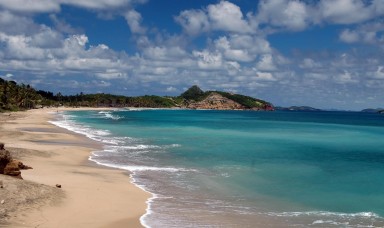 Grenada is an island country and commonwealth realm consisting of the island of Grenada and six smaller islands at the southern end of the Grenadines in the southeastern Caribbean Sea. Grenada is located northwest of Trinidad and Tobago, northeast of Venezuela, and southwest of Saint Vincent and the Grenadines.

The island of Grenada is the largest island in the Grenadines; smaller islands are Carriacou, Petit Martinique, Ronde Island, Caille Island, Diamond Island, Large Island, Saline Island, and Frigate Island. Most of the population lives on Grenada, and major towns there include the capital, St. George’s, Grenville and Gouyave. The largest settlement on the other islands is Hillsborough on Carriacou.

The islands are of volcanic origin with extremely rich soil. Grenada’s interior is very mountainous with Mount St. Catherine being the highest at 840 m. Several small rivers with beautiful waterfalls flow into the sea from these mountains. The climate is tropical: hot and humid in the rainy season and cooled by the trade winds in the dry season. Grenada, being on the southern edge of the hurricane belt, has suffered only three hurricanes in fifty years.

A majority of Grenadine citizens (82%) are descendants of the African slaves brought by the English and French; few of the indigenous Carib and Arawak population survived the French purge at Sauteurs. A small percentage of descendants of indentured workers from India were brought to Grenada mainly from the North Indian states of Bihar and Uttar Pradesh between May 1, 1857 – January 10, 1885. Today, Grenadians of Indian descent comprise the second largest ethnic group. There is also a small community of French and English descendants. The rest of the population is of mixed descent (13%).

Grenada, like many of the Caribbean islands is subject to a large amount of migration, with a large number of young people wanting to leave the island to seek life elsewhere. With 110,000 people living in Grenada, estimates and census data suggest that there are at least that number of Grenadian-born people in other parts of the Caribbean (such as Barbados and Trinidad) and at least that number again in First World countries. Popular migration points for Grenadians further north include New York City, Toronto, the United Kingdom (in particular, London and Yorkshire; see Grenadians in the UK) and sometimes Montreal, or as far south as Australia. This means that probably around a third of those born in Grenada still live there.

The official language, English, is used in the government, but Grenadian Creole is considered the lingua franca of the island. French Patois (Antillean Creole) is also spoken by about 10%–20% the population. Some Hindi/Bhojpuri terms are still spoken amongst the Indian descendants, mostly those pertaining to the kitchen; such as aloo, geera, karela, seim, chownkay, and baylay. The term bhai, which means ‘brother’ in Urdu and Hindi, is a common form of greeting amongst Indo-Grenadians males of equal status.

On February 19, 2013, Prime Minister Keith Claudius Mitchell, 65, led the New National Party (NNP) to victory with a clean sweep of 15 seats. Mitchell was sworn into office on February 21 and is the country’s ninth prime minister since it attained political independence from Britain in 1974.

Grenada is a full and participating member of both the Caribbean Community (CARICOM) and the Organisation of Eastern Caribbean States (OECS).

Economic progress in fiscal reforms and prudent macroeconomic management have boosted annual growth to 5%–6% in 1998–99; the increase in economic activity has been led by construction and trade. Tourist facilities are being expanded; tourism is the leading foreign exchange earner. Major short-term concerns are the rising fiscal deficit and the deterioration in the external account balance. Grenada shares a common central bank and a common currency (the East Caribbean dollar) with seven other members of the Organisation of Eastern Caribbean States (OECS)

Grenada is a leading producer of several different spices. Cinnamon, cloves, ginger, mace, allspice, orange/citrus peels, wild coffee used by the locals, and especially nutmeg, providing 20% of the world supply, are all important exports. The nutmeg on the nation’s flag represents the economic crop of Grenada; the nation is the world’s second largest producer of nutmeg (after Indonesia).

Tourism is Grenada’s main economic force. Conventional beach and water-sports tourism is largely focused in the southwest region around St George, the airport and the coastal strip; however, ecotourism is growing in significance. Most of these small ecofriendly guesthouses are located in the Saint David and Saint John parishes. The tourism industry is increasing dramatically with the construction of a large cruise ship pier and esplanade. Up to four cruise ships per day were visiting St. Georges in 2007–2008 during the cruise ship season.

The island has also pioneered the cultivation of organic cocoa which is also processed into finished bars by the Grenada Chocolate Company.

Tourism is concentrated in the southwest of the island, around St. George, Grand Anse, Lance Aux Epines, and Point Salines. Grenada has many idyllic beaches around its coastline including the 3 km (1.9 mi) long Grand Anse Beach in St George which is considered to be one of the finest beaches in the world and often appears in countdowns of the world’s top ten beaches.

Flights at the Maurice Bishop International Airport connect with other Caribbean islands, the United States, Canada, and Europe. There is also a daily fast ferry service between St. George and Hillsborough. Beginning in October 2009 new passenger ferry service between Grenada, Barbados, St. Vincent, St. Lucia, and Trinidad provided by Grenada-based BEDY Ocean Line is scheduled to begin. However as of January 2013 this service has not gone operational.

Although French influence on Grenadian culture is much less visible than on other Caribbean islands, surnames and place names in French remain, and the every day language is laced with French words and the local dialect or Patois. Stronger French influence is found in the well seasoned spicy food and styles of cooking similar to those found in New Orleans, and some French architecture has survived from the 1700s. Island culture is heavily influenced by the African roots of most of the Grenadians, but Indian and Carib Amerindian influence is also seen with dhal puri, rotis, Indian sweets, cassava and curries in the cuisine.

The “oildown” is considered to be the national dish. The name refers to a dish cooked in coconut milk until all the milk is absorbed, leaving a bit of coconut oil in the bottom of the pot. Early recipes call for a mixture of salted pigtail, pig’s feet (trotters), salt beef and chicken, dumplings made from flour, and provision like breadfruit, green banana, yam and potatoes. Callaloo leaves are sometimes used to retain the steam and for extra flavour.

Soca, calypso, and reggae set the mood for Grenada’s annual Carnival activities. Over the years rap music became famous among Grenadian youths, and there have been numerous young rappers emerging in the island’s underground rap scene. Zouk is also being slowly introduced onto the island. The islanders’ African and Carib Amerindian heritage plays an influential role in many aspects of Grenada’s culture.

As with other islands from the Caribbean, cricket is the national and most popular sport and is an intrinsic part of Grenadian culture.

An important aspect of the Grenadian culture is the tradition of story telling, with folk tales bearing both African and French influences. The character, Anancy, a spider who is a trickster, originated in West Africa and is prevalent on other islands as well. French influence can be seen in La Diablesse, a well-dressed she-devil, and Ligaroo (from Loup Garoux), a werewolf.