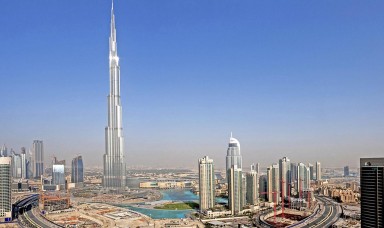 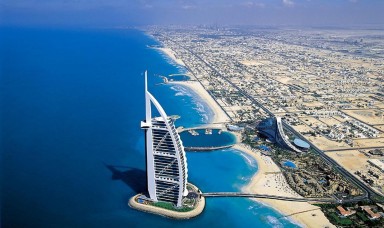 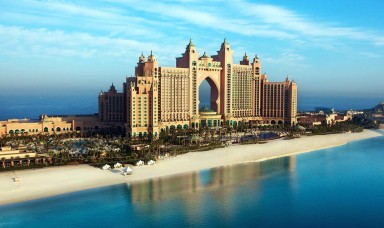 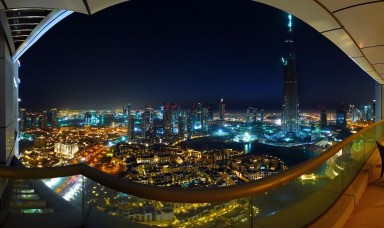 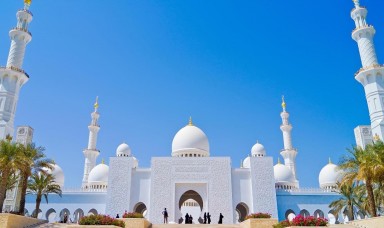 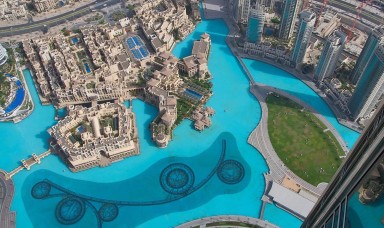 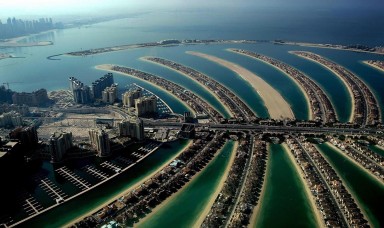 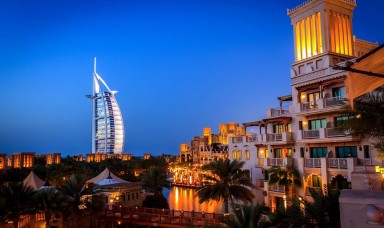 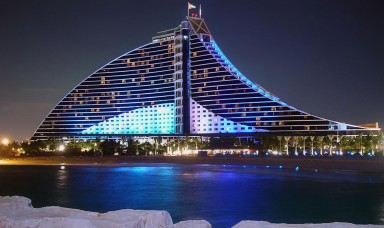 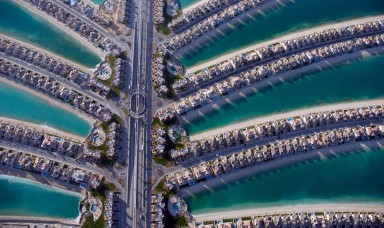 The United Arab Emirates Listeni/juːˌnaɪtɨd ˌærəb ˈɛmɪrɨts/ (Arabic: دولة الإمارات العربية المتحدة‎ Dawlat al-ʾImārāt al-ʿArabiyyah al-Muttaḥidah), sometimes simply called the Emirates or the UAE,[note 1] is a country located in the southeast end of the Arabian Peninsula on the Persian Gulf, bordering Oman to the east and Saudi Arabia to the south, as well as sharing sea borders with Qatar, Iran and Pakistan.

The United Arab Emirates is situated in Southwest Asia, bordering the Gulf of Oman and the Persian Gulf, between Oman and Saudi Arabia; it is in a strategic location along southern approaches to the Strait of Hormuz, a vital transit point for world crude oil.

The UAE lies between 22°30′ and 26°10′ north latitude and between 51° and 56°25′ east longitude. It shares a 530-kilometer border with Saudi Arabia on the west, south, and southeast, and a 450-kilometer border with Oman on the southeast and northeast. The land border with Qatar in the Khawr al Udayd area is about nineteen kilometers (12 miles) in the northwest; however, it is a source of ongoing dispute. Following Britain’s military departure from UAE in 1971, and its establishment as a new state, the UAE laid claim to islands resulting in disputes with Iran that remain unresolved. UAE also disputes claim on other islands against the neighboring state of Qatar. The largest emirate, Abu Dhabi, accounts for 87% of the UAE’s total area (67,340 square kilometres (26,000 sq mi)). The smallest emirate, Ajman, encompasses only 259 km2 (100 sq mi)(see figure).

The UAE coast stretches for more than 650 km (404 mi) along the southern shore of the Persian Gulf. Most of the coast consists of salt pans that extend far inland. The largest natural harbor is at Dubai, although other ports have been dredged at Abu Dhabi, Sharjah, and elsewhere. Numerous islands are found in the Persian Gulf, and the ownership of some of them has been the subject of international disputes with both Iran and Qatar. The smaller islands, as well as many coral reefs and shifting sandbars, are a menace to navigation. Strong tides and occasional windstorms further complicate ship movements near the shore. The UAE also has a stretch of the Al Bāţinah coast of the Gulf of Oman, although the Musandam Peninsula, the very tip of Arabia by the Strait of Hormuz is an exclave of Oman separated by the UAE.

South and west of Abu Dhabi, vast, rolling sand dunes merge into the Rub al-Khali (Empty Quarter) of Saudi Arabia. The desert area of Abu Dhabi includes two important oases with adequate underground water for permanent settlements and cultivation. The extensive Liwa Oasis is in the south near the undefined border with Saudi Arabia. About 100 km (62 mi) to the northeast of Liwa is the Al-Buraimi oasis, which extends on both sides of the Abu Dhabi-Oman border. Lake Zakher is a man-made lake near the border with Oman.

Prior to withdrawing from the area in 1971, Britain delineated the internal borders among the seven emirates in order to preempt territorial disputes that might hamper formation of the federation. In general, the rulers of the emirates accepted the British intervention, but in the case of boundary disputes between Abu Dhabi and Dubai, and also between Dubai and Sharjah, conflicting claims were not resolved until after the UAE became independent. The most complicated borders were in the Al-Hajar al-Gharbi Mountains, where five of the emirates contested jurisdiction over more than a dozen enclaves.

The demographics of the UAE are extremely diverse. In 2010, the UAE’s population was estimated to be 8,264,070, of whom only 13% were UAE nationals or Emiratis, while the majority of the population were expatriates. The country’s net migration rate stands at 21.71, the world’s highest. Under Article 8 of UAE Federal Law no. 17, an expatriate can apply for UAE citizenship after residing in the country for 20 years, providing that person has never been convicted of a crime and can speak fluent Arabic.

With a male/female sex ratio of 2.2 for the total population and 2.75 for the 15–65 age group, the UAE’s gender imbalance is second highest in the world after Qatar.

There is a growing presence of Europeans especially in multi-cultural cities such as Dubai Western expatriates, from Europe, Australia, Northern America and Latin America make up 500,000 of the UAE population. The UAE has also attracted a small number of expatriates from countries in Europe, North America, Asia, and Oceania. More than 100,000 British nationals live in the country. The rest of the population were from other Arab states.

The average life expectancy is 76.7 years (2012), higher than for any other Arab country.

About 88% of the population of the United Arab Emirates is urban.

There is an Omani exclave surrounded by UAE territory, known as Wadi Madha. It is located halfway between the Musandam peninsula and the rest of Oman in the Emirate of Sharjah. It covers approximately 75 square kilometres (29 square miles) and the boundary was settled in 1589. The north-east corner of Madha is closest to the Khor Fakkan-Fujairah road, barely 10 metres (33 ft) away. Within the Omani exclave of Madha, is a UAE exclave called Nahwa, also belonging to the Emirate of Sharjah. It is about 8 kilometres (5 mi) on a dirt track west of the town of New Madha. It consists of about forty houses with its own clinic and telephone exchange.

The UAE has a relatively high Human Development Index among the Asian continent, ranking forty-first globally. In 2011, UAE is ranked as the 14th best nation in the world for doing business based on its economy and regulatory environment, ranked by the Doing Business 2011 Report published by the World Bank Group

Petroleum and natural gas exports play an important role in the economy, especially in Abu Dhabi. More than 85% of the UAE’s economy was based on the exports of natural resources in 2009. The UAE has tried to reduce its dependency on oil exports by diversifying the economy, particularly in the financial, tourism and construction sectors. While Abu Dhabi remained relatively conservative in its approach, Dubai, which has far smaller oil reserves, was bolder in its diversification policy.

UAE law does not allow trade unions to exist. The right to collective bargaining and the right to strike are not recognised, and the Ministry of Labour has the power to force workers to go back to work. Migrant workers who participate in a strike can have their work permits cancelled and be deported. Consequently, there are very few anti-discrimination laws in relation to labour issues, with Emiratis – other GCC Arabs – getting preference when it comes to employment, even though they show scant regard for work and learning on the job.

The UAE’s economy, particularly that of Dubai, was badly hit by the financial crisis of 2007–2010. In 2009, the country’s economy shrank by 4.00% and the property sector and construction went into decline. However, tourism, trade and the retail sector have remained buoyant and the UAE’s overseas investments are expected to support its full economic recovery. Concern remains about the property sector. Property prices in Dubai fell dramatically when Dubai World, the government construction company, sought to delay a debt payment. The econmy is depending on foreign labour force and Emerisation is only showing few positive effects which was found out in studies from Paul Dyer and Natasha Ridge from Dubai School of Government, Ingo Forstenlechner from United Arab Emirates University, Kasim Randaree from the British University of Dubai and Paul Knoglinger from the FHWien.

The UAE has been spending billions of dollars on infrastructure. These developments are particularly evident in the larger emirates of Abu Dhabi and Dubai. The northern emirates are rapidly following suit, providing major incentives for developers of residential and commercial property.

Dubai International Airport was the Busiest airport in the world by international passenger traffic from January to May 2013, overtaking London Heathrow. As roads in the western and southern regions are still relatively undeveloped, residents prevalently use airplanes as the main or alternative mode of transportation. A 1,200 km (750 mi) country-wide national railway is under construction which will connect all the major cities and ports. The Dubai Metro is the first urban train network in the Arabian Peninsula. The major ports of the United Arab Emirates are Khalifa Port, Mina Zayed, Port Jebel Ali, Port Rashid, Port Khalid, Port Saeed, and Port Khor Fakkan.

The UAE has signed peaceful nuclear agreements with France, United States, and South Korea, and a memorandum of understanding with the United Kingdom.

The UAE is presently serviced by two telecommunications operators, Etisalat and Emirates Integrated Telecommunications Company (“du”). Etisalat operated a monopoly until du launched mobile services in February 2007. Internet subscribers are expected to increase from 0.904 million in 2007 to 2.66 million in 2012. The authorities filter websites for religious, political and sexual content.

Most Emirati males prefer to wear a kandura, an ankle-length white tunic woven from wool or cotton, and most Emirati women wear an abaya, a black over-garment that covers most parts of the body. The non-governmental campaign UAE Dress Code aims to educate the expat population on local dressing and its sensitivity to Emirati population. Each of the seven semiautonomous emirates has its own rules about attire. Dubai is the most liberal in that regard, allowing miniskirts and bikinis, while Ras al-Khaimah adopted a rule in April 2013 prohibiting bikinis, as well as tight swimsuits for males, on public beaches.

Ancient Emirati poetry was strongly influenced by the 8th-century Arab scholar Al Khalil bin Ahmed. The earliest known poet in the UAE is Ibn Majid, born between 1432 and 1437 in Ras Al-Khaimah. The most famous Emirati writers were Mubarak Al Oqaili (1880–1954), Salem bin Ali al Owais (1887–1959) and Ahmed bin Sulayem (1905–1976). Three other poets from Sharjah, known as the Hirah group, are observed to have been heavily influenced by the Apollo and romantic poets. The Sharjah International Book Fair is the oldest and largest in the country.

The list of museums in the United Arab Emirates includes some of regional repute, most famously Sharjah with its Heritage District containing 17 museums, which in 1998 was the Cultural Capital of the Arab World. In Dubai, the area of Al Quoz has attracted a number of art galleries as well as museums such as the Salsali Private Museum. Abu Dhabi has established a culture district on Saadiyat Island. There, six grand projects are planned, including the Guggenheim Abu Dhabi and the Louvre Abu Dhabi. Dubai also plans to build a Kunsthal museum and a district for galleries and artists.

The United Arab Emirates is a part of the khaliji tradition, and is also known for Bedouin folk music. Liwa is a type of music and dance performed mainly in communities that contain descendants of Bantu peoples from the African Great Lakes region. The Dubai Desert Rock Festival is also another major festival consisting of heavy metal and rock artists. The cinema of the United Arab Emirates is minimal but expanding.

The Media of the United Arab Emirates plays an important role in the region. Dubai Media City and twofour54, Abu Dhabi’s media zone, were set up to attract key players. The UAE is home to major pan-Arab broadcasters, including the Middle East Broadcasting Centre and Orbit Showtime Network. On 25 September 2007 Sheikh Mohammed bin Rashid Al Maktoum decreed that journalists can no longer be prosecuted or imprisoned for reasons relating to their work. At the same time, the UAE has made it illegal to disseminate online material that can threaten “public order”. Criticism of the Royal family or government procedures is not allowed. Prison terms have been given to those who “deride or damage” the reputation of the state and “display contempt” for religion. Very recently, a YouTube user was arrested in Dubai for filming and uploading a video of a UAE local (who happened to be a Government official) hitting an overseas worker.