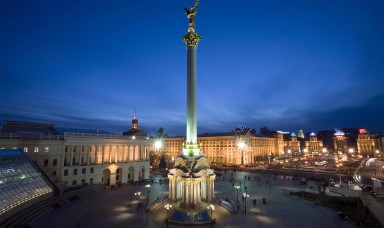 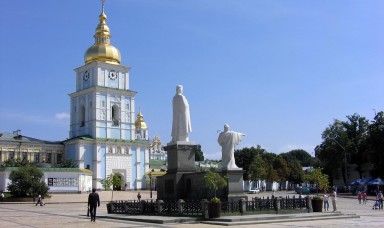 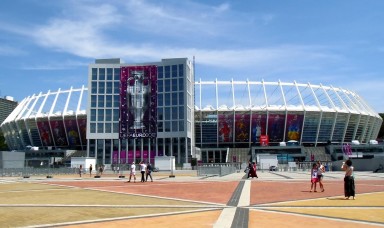 Ukraine is a country in Eastern Europe. Ukraine borders the Russian Federation to the east and northeast, Belarus to the northwest, Poland, Slovakia and Hungary to the west, Romania and Moldova to the southwest, and the Black Sea and Sea of Azov to the south and southeast, respectively. It has an area of 603,628 km2 (233,062 sq mi), making it the largest country entirely within Europe.

At 603,700 square kilometres (233,100 sq mi) and with a coastline of 2,782 kilometres (1,729 mi), Ukraine is the world’s 44th-largest country (after the Central African Republic, before Madagascar). It is the largest wholly European country and the second largest country in Europe (after the European part of Russia, before metropolitan France). It lies between latitudes 44° and 53° N, and longitudes 22° and 41° E.

The Ukrainian landscape consists mostly of fertile plains (or steppes) and plateaus, crossed by rivers such as the Dnieper (Dnipro), Seversky Donets, Dniester and the Southern Buh as they flow south into the Black Sea and the smaller Sea of Azov. To the southwest, the delta of the Danube forms the border with Romania. Its various regions have diverse geographic features ranging from the highlands to the lowlands. The country’s only mountains are the Carpathian Mountains in the west, of which the highest is the Hora Hoverla at 2,061 metres (6,762 ft), and the Crimean Mountains on Crimea, in the extreme south along the coast. However Ukraine also has a number of highland regions such as the Volyn-Podillia Upland (in the west) and the Near-Dnipro Upland (on the right bank of Dnieper); to the east there are the south-western spurs of the Central Russian Uplands over which runs the border with Russia. Near the Sea of Azov can be found the Donets Ridge and the Near Azov Upland. The snow melt from the mountains feeds the rivers, and natural changes in altitude form a sudden drop in elevation and create many opportunities to form waterfalls.

Significant natural resources in Ukraine include iron ore, coal, manganese, natural gas, oil, salt, sulfur, graphite, titanium, magnesium, kaolin, nickel, mercury, timber and an abundance of arable land. Despite this, the country faces a number of major environmental issues such as inadequate supplies of potable water; air and water pollution and deforestation, as well as radiation contamination in the north-east from the 1986 accident at the Chernobyl Nuclear Power Plant. Recycling toxic household waste is still in its infancy in Ukraine.

The system of Ukrainian subdivisions reflects the country’s status as a unitary state (as stated in the country’s constitution) with unified legal and administrative regimes for each unit.

Ukraine is subdivided into twenty-four oblasts (provinces) and one autonomous republic (avtonomna respublika), Crimea. Additionally, the cities of Kiev, the capital, and Sevastopol, both have a special legal status. The 24 oblasts and Crimea are subdivided into 490 raions (districts), or second-level administrative units. The average area of a Ukrainian raion is 1,200 square kilometres (460 sq mi); the average population of a raion is 52,000 people.

Urban areas (cities) can either be subordinated to the state (as in the case of Kiev and Sevastopol), the oblast or raion administrations, depending on their population and socio-economic importance. Lower administrative units include urban-type settlements, which are similar to rural communities, but are more urbanized, including industrial enterprises, educational facilities, and transport connections, and villages.

In Soviet times, the economy of Ukraine was the second largest in the Soviet Union, being an important industrial and agricultural component of the country’s planned economy. With the dissolution of the Soviet system, the country moved from a planned economy to a market economy. The transition process was difficult for the majority of the population which plunged into poverty. Ukraine’s economy contracted severely following the years after the Soviet dissolution. Day to day life for the average person living in Ukraine was a struggle. A significant number of citizens in rural Ukraine survived by growing their own food, often working two or more jobs and buying the basic necessities through the barter economy.

In 1991, the government liberalised most prices to combat widespread product shortages, and was successful in overcoming the problem. At the same time, the government continued to subsidise state-run industries and agriculture by uncovered monetary emission. The loose monetary policies of the early 1990s pushed inflation to hyperinflationary levels. For the year 1993, Ukraine holds the world record for inflation in one calendar year. Those living on fixed incomes suffered the most. Prices stabilised only after the introduction of new currency, the hryvnia, in 1996.

The country was also slow in implementing structural reforms. Following independence, the government formed a legal framework for privatisation. However, widespread resistance to reforms within the government and from a significant part of the population soon stalled the reform efforts. A large number of state-owned enterprises were exempt from the privatisation process.

In the meantime, by 1999, the GDP had fallen to less than 40 percent of the 1991 level. It recovered considerably in the following years, but still doesn’t reach historical maximum. In the early 2000s, the economy showed strong export-based growth of 5 to 10 percent, with industrial production growing more than 10 percent per year. Ukraine was hit by the economic crisis of 2008 and in November 2008, the IMF approved a stand-by loan of $16.5 billion for the country.

Ukraine’s 2010 GDP (PPP), as calculated by the CIA, is ranked 38th in the world and estimated at $305.2 billion. Its GDP per capita in 2010 according to the CIA was $6,700 (in PPP terms), ranked 107th in the world. Nominal GDP (in U.S. dollars, calculated at market exchange rate) was $136 billion, ranked 53rd in the world. By July 2008 the average nominal salary in Ukraine reached 1,930 hryvnias per month. Despite remaining lower than in neighbouring central European countries, the salary income growth in 2008 stood at 36.8 percent According to the UNDP in 2003 4.9% of the Ukrainian population lived under 2 US dollar a day and 19.5% of the population lived below the national poverty line that same year. According to the World Bank in 2010 only 0.1% of population lived under 2 US dollar a day.

Ukraine produces nearly all types of transportation vehicles and spacecraft. Antonov airplanes and KrAZ trucks are exported to many countries. The majority of Ukrainian exports are marketed to the European Union and CIS. Since independence, Ukraine has maintained its own space agency, the National Space Agency of Ukraine (NSAU). Ukraine became an active participant in scientific space exploration and remote sensing missions. Between 1991 and 2007, Ukraine has launched six self made satellites and 101 launch vehicles, and continues to design spacecraft.

The country imports most energy supplies, especially oil and natural gas, and to a large extent depends on Russia as its energy supplier. While 25 percent of the natural gas in Ukraine comes from internal sources, about 35 percent comes from Russia and the remaining 40 percent from Central Asia through transit routes that Russia controls. At the same time, 85 percent of the Russian gas is delivered to Western Europe through Ukraine.

The World Bank classifies Ukraine as a middle-income state. Significant issues include underdeveloped infrastructure and transportation, corruption and bureaucracy. In 2007 the Ukrainian stock market recorded the second highest growth in the world of 130 percent. According to the CIA, in 2006 the market capitalization of the Ukrainian stock market was $111.8 billion.

Growing sectors of the Ukrainian economy include the information technology (IT) market, which topped all other Central and Eastern European countries in 2007, growing some 40 percent. Ukraine ranks fourth in the world in number of certified IT professionals after the United States, India and Russia.

Ukrainian customs are heavily influenced by Christianity, which is the dominant religion in the country. Gender roles also tend to be more traditional, and grandparents play a greater role in raising children than in the West. The culture of Ukraine has been also influenced by its eastern and western neighbours, which is reflected in its architecture, music and art.

The Communist era had quite a strong effect on the art and writing of Ukraine. In 1932, Stalin made socialist realism state policy in the Soviet Union when he promulgated the decree “On the Reconstruction of Literary and Art Organisations”. This greatly stifled creativity. During the 1980s glasnost (openness) was introduced and Soviet artists and writers again became free to express themselves as they wanted.

The tradition of the Easter egg, known as pysanky, has long roots in Ukraine. These eggs were drawn on with wax to create a pattern; then, the dye was applied to give the eggs their pleasant colours, the dye did not affect the previously wax-coated parts of the egg. After the entire egg was dyed, the wax was removed leaving only the colourful pattern. This tradition is thousands of years old, and precedes the arrival of Christianity to Ukraine. In the city of Kolomya near the foothills of the Carpathian mountains in 2000 was built the museum of Pysanka which won a nomination as the monument of modern Ukraine in 2007, part of the Seven Wonders of Ukraine action.