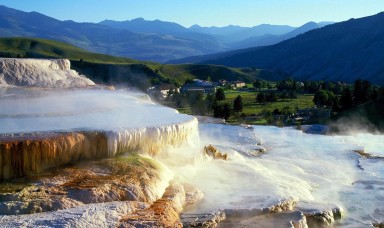 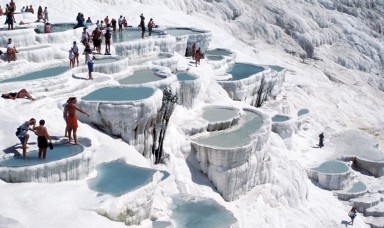 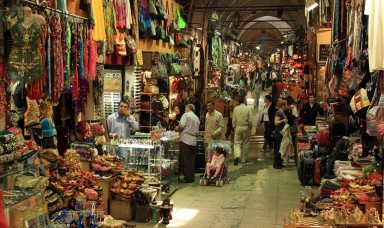 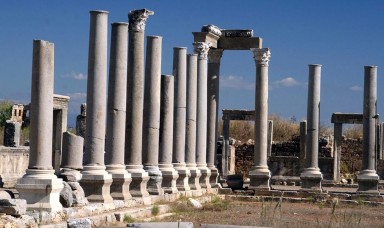 Turkey (Turkish: Türkiye), officially the Republic of Turkey (About this sound Türkiye Cumhuriyeti (help·info)), is a contiguous transcontinental country, located mostly on Anatolia in Western Asia, and on East Thrace in Southeastern Europe. Turkey is bordered by eight countries: Bulgaria to the northwest; Greece to the west; Georgia to the northeast; Armenia, Iran and the Azerbaijani exclave of Nakhchivan to the east; and Iraq and Syria to the southeast.

The European section of Turkey, East Thrace, forms the borders of Turkey with Greece and Bulgaria. The Asian part of the country, Anatolia, consists of a high central plateau with narrow coastal plains, between the Köroğlu and Pontic mountain ranges to the north and the Taurus Mountains to the south. Eastern Turkey has a more mountainous landscape and is home to the sources of rivers such as the Euphrates, Tigris and Aras, and contains Mount Ararat, Turkey’s highest point at 5,137 metres (16,854 ft), and Lake Van, the largest lake in the country.

Turkey’s varied landscapes are the product of complex earth movements that have shaped the region over thousands of years and still manifest themselves in fairly frequent earthquakes and occasional volcanic eruptions. The Bosphorus and the Dardanelles owe their existence to the fault lines running through Turkey that led to the creation of the Black Sea. There is an earthquake fault line across the north of the country from west to east, along which a major earthquake occurred in 1999.

The last official census was in 2000 and recorded a total country population of 67,803,927 inhabitants. According to the Address-Based Population Recording System of Turkey, the country’s population was 74.7 million people in 2011, nearly three-quarters of whom lived in towns and cities. According to the 2011 estimate, the population is increasing by 1.35% each year. Turkey has an average population density of 97 people per km². People within the 15–64 age group constitute 67.4% of the total population; the 0–14 age group corresponds to 25.3%; while senior citizens aged 65 years or older make up 7.3%. In 1927, when the first official census was recorded in the Republic of Turkey, the population was 13.6 million. The largest city in Turkey, Istanbul, is also the largest city in Europe in population, and the third-largest city in Europe in terms of size.

Article 66 of the Turkish Constitution defines a “Turk” as “anyone who is bound to the Turkish state through the bond of citizenship”; therefore, the legal use of the term “Turkish” as a citizen of Turkey is different from the ethnic definition. However, the majority of the Turkish population are of Turkish ethnicity. They are estimated at 70–75% by the CIA World Factbook. Reliable data on the ethnic mix of the population is not available, because Turkish census figures do not include statistics on ethnicity. The three minority groups officially recognised in the Treaty of Lausanne are Armenians, Greeks and Jews. Other ethnic groups include Abkhazians, Albanians, Arabs, Assyrians, Bosniaks, Circassians, Georgians, Hamshenis, Laz, Crimean Tatars, Bulgarians, Pomaks, and Roma. The Kurds, a distinct ethnic group concentrated mainly in the southeastern provinces of the country, are the largest non-Turkic ethnicity, variously estimated around 18%. Minorities besides the Kurds are thought to make up an estimated 7–12% of the population. Minorities other than the three officially recognized ones do not have specific minority rights. The term “minority” itself remains a sensitive issue in Turkey, while the Turkish government is frequently criticized for its treatment of minorities. Minorities of European origin include the Levantines, who have been present in the country (particularly in Istanbul and Izmir) since the medieval period. The Turkish government has accepted over 400,000 Syrian refugees. Turkey has accommodated most of its Syrian refugees in tent cities administered by the country’s emergency management agency.

Life expectancy stands at 71.1 years for men and 75.3 years for women, with an overall average of 73.2 years for the populace as a whole. Health care in Turkey used to be dominated by a centralized state system run by the Ministry of Health. In 2003, the government introduced a sweeping health reform programme aimed at increasing the ratio of private to state health provision and making healthcare available to a larger share of the population. Turkish Statistical Institute announced that 76.3 billion TL was spent for healthcare in 2012; 79.6% of which was covered by the Social Security Institution and 15.4% of which was paid directly by the patients. As of 2012, there were 29,960 medical institutions in Turkey, one doctor per 583 people, and 2.65 beds per 1000 people.

Turkey is subdivided into 81 provinces for administrative purposes. Each province is divided into districts, for a total of 923 districts.

Turkey has the world’s 15th largest GDP-PPP and 17th largest nominal GDP. The country is among the founding members of the OECD and the G-20 major economies.

During the first six decades of the republic, between 1923 and 1983, Turkey has mostly adhered to a quasi-statist approach with strict government planning of the budget and government-imposed limitations over private sector participation, foreign trade, flow of foreign currency, and foreign direct investment. However, in 1983 Prime Minister Turgut Özal initiated a series of reforms designed to shift the economy from a statist, insulated system to a more private-sector, market-based model.needed]

The reforms, combined with unprecedented amounts of foreign loans, spurred rapid economic growth; but this growth was punctuated by sharp recessions and financial crises in 1994, 1999 (following the earthquake of that year), and 2001; resulting in an average of 4% GDP growth per annum between 1981 and 2003. Lack of additional fiscal reforms, combined with large and growing public sector deficits and widespread corruption, resulted in high inflation, a weak banking sector and increased macroeconomic volatility. Since the economic crisis of 2001 and the reforms initiated by the finance minister of the time, Kemal Derviş, inflation has fallen to single-digit numbers, investor confidence and foreign investment have soared, and unemployment has fallen.

Turkey has gradually opened up its markets through economic reforms by reducing government controls on foreign trade and investment and the privatization of publicly owned industries, and the liberalization of many sectors to private and foreign participation has continued amid political debate. The public debt to GDP ratio peaked at 75.9% during the recession of 2001, falling to an estimated 26.9% by 2013.

The real GDP growth rate from 2002 to 2007 averaged 6.8% annually, which made Turkey one of the fastest growing economies in the world during that period. However, growth slowed to 1% in 2008, and in 2009 the Turkish economy was affected by the global financial crisis, with a recession of 5%. The economy was estimated to have returned to 8% growth in 2010. According to Eurostat data, Turkish GDP per capita adjusted by purchasing power standard stood at 52% of the EU average in 2011.

In the early years of the 21st century, the chronically high inflation was brought under control and this led to the launch of a new currency, the Turkish new lira, on 1 January 2005, to cement the acquisition of the economic reforms and erase the vestiges of an unstable economy. On 1 January 2009, the new Turkish lira was renamed once again as the Turkish lira, with the introduction of new banknotes and coins. As a result of continuing economic reforms, inflation dropped to 8% in 2005, and the unemployment rate to 10%.

Tourism in Turkey has experienced rapid growth in the last twenty years, and constitutes an important part of the economy. In 2012, 35.5 million foreign visitors arrived in Turkey, which ranked as the 6th most popular tourism destination in the world; they contributed $25.6 billion to Turkey’s revenues.

Turkey has a large automotive industry, which produced 1,072,339 motor vehicles in 2012, ranking as the 16th largest producer in the world. The Turkish shipbuilding industry realized exports worth US$1.2 billion in 2011. The major export markets are Malta, Marshall Islands, Panama and the United Kingdom. Turkish shipyards have 15 floating docks of different sizes and one dry dock. Tuzla, Yalova, and İzmit have developed into dynamic shipbuilding centres. In 2011, there were 70 active shipyards in Turkey, with another 56 being built. Turkish shipyards are considered to be highly ranked in the production of chemical and oil tankers up to 10,000 dwt. Turkish yards are also highly regarded in the production of mega yachts.

Turkish brands like Beko and Vestel are among the largest producers of consumer electronics and home appliances in Europe, and invest a substantial amount of funds for research and development in new technologies related to these fields.

Other key sectors of the Turkish economy are banking, construction, home appliances, electronics, textiles, oil refining, petrochemical products, food, mining, iron and steel, and machine industry. In 2010, the agricultural sector accounted for 9% of GDP, while the industrial sector accounted for 26% and the services sector 65%. However, agriculture still accounted for 24.7% of employment. In 2004, it was estimated that 46% of total disposable income was received by the top of 20% income earners, while the lowest 20% received 6%. The rate of female employment in Turkey was 29.5% in 2012, the lowest among all OECD countries.

Turkey has a very diverse culture that is a blend of various elements of the Oğuz Turkic, Anatolian, Ottoman (which was itself a continuation of both Greco-Roman and Islamic cultures) and Western culture and traditions, which started with the Westernisation of the Ottoman Empire and still continues today. This mix originally began as a result of the encounter of Turks and their culture with those of the peoples who were in their path during their migration from Central Asia to the West. Turkish culture is a product of efforts to be a “modern” Western state, while maintaining traditional religious and historical values.

Turkish painting, in the Western sense, developed actively starting from the mid 19th century. The very first painting lessons were scheduled at what is now the Istanbul Technical University (then the Imperial Military Engineering School) in 1793, mostly for technical purposes. In the late 19th century, human figure in the western sense was being established in Turkish painting, especially with Osman Hamdi Bey. Impressionism, among the contemporary trends, appeared later on with Halil Paşa. The young Turkish artists sent to Europe in 1926 came back inspired by contemporary trends such as Fauvism, Cubism and even Expressionism, still very influential in Europe. The later “Group D” of artists introduced some trends that had lasted in the West for thirty, forty years. The leading artists of the “Group D” movement were Abidin Dino, Bedri Rahmi Eyüboğlu, Fikret Mualla, Adnan Çoker, Fahrunissa Zeid and Burhan Doğançay. Other important movements in Turkish painting were the “Yeniler Grubu” (The Newcomers Group) of the late 1930s; the “On’lar Grubu” (Group of Ten) of the 1940s; the “Yeni Dal Grubu” (New Branch Group) of the 1950s; and the “Siyah Kalem Grubu” (Black Pen Group) of the 1960s. The leading artists of contemporary Turkish painting include Avni Arbaş, Ercüment Kalmık, Neşe Erdok, Bedri Baykam, Setenay Özbek, Sevil Soyer, Haluk Akakçe and Genco Gulan.