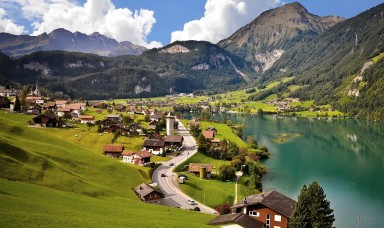 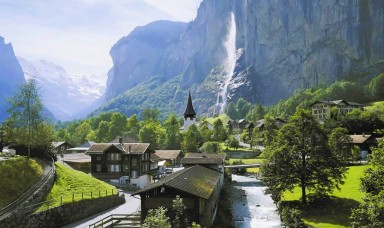 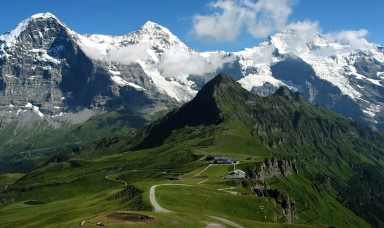 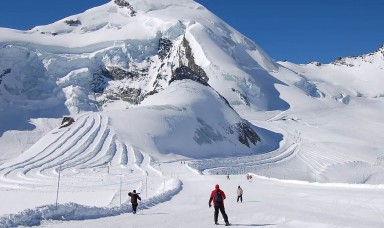 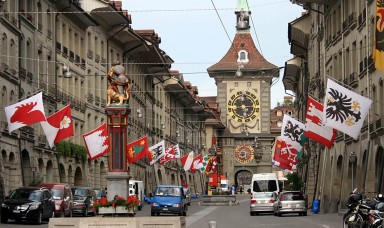 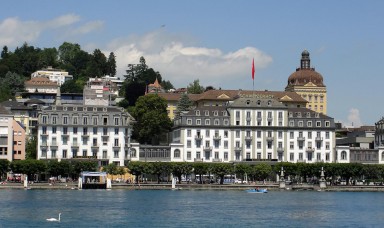 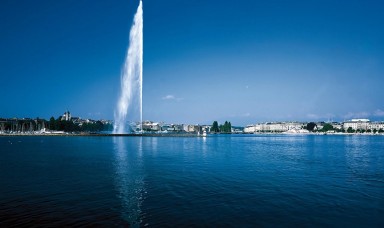 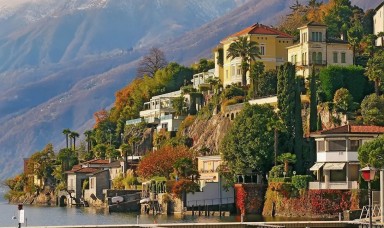 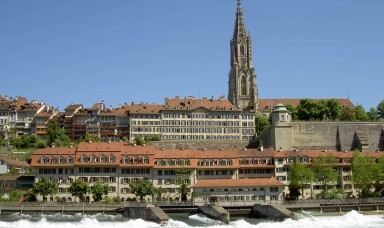 Switzerland , officially the Swiss Confederation (Latin: Confoederatio Helvetica, hence its abbreviation CH), is a federal parliamentary republic consisting of 26 cantons, with Bern as the seat of the federal authorities. The country is situated in Western and Central Europe,4] where it is bordered by Germany to the north, France to the west, Italy to the south, and Austria and Liechtenstein to the east.

Extending across the north and south side of the Alps in west-central Europe, Switzerland encompasses a great diversity of landscapes and climates on a limited area of 41,285 square kilometres (15,940 sq mi). The population is about 7.9 million, resulting in an average population density of around 190 people per square kilometre (485/sq mi). The more mountainous southern half of the country is far more sparsely populated than the northern half. In the largest Canton of Graubünden, lying entirely in the Alps, population density falls to 27 /km² (70 /sq mi).

Switzerland lies between latitudes 45° and 48° N, and longitudes 5° and 11° E. It contains three basic topographical areas: the Swiss Alps to the south, the Swiss plateau or middleland, and the Jura mountains on the north. The Alps are a high mountain range running across the central-south of the country, comprising about 60% of the country’s total area. Among the high valleys of the Swiss Alps many glaciers are found, totalling an area of 1,063 square kilometres. From these originate the headwaters of several major rivers, such as the Rhine, Inn, Ticino and Rhone, which flow in the four cardinal directions into the whole of Europe. The hydrographic network includes several of the largest bodies of freshwater in Central and Western Europe, among which are included Lake Geneva, Lake Constance and Lake Maggiore. Switzerland has more than 1500 lakes, and contains 6% of Europe’s stock of fresh water. Lakes and glaciers cover about 6% of the national territory.

About a hundred of Switzerland’s mountain peaks are close to or higher than 4,000 metres (13,000 ft). At 4,634 m (15,203 ft), Monte Rosa is the highest, although the Matterhorn (4,478 m or 14,692 ft) is probably the most famous. Both are located within the Pennine Alps in the canton of Valais. The section of the Bernese Alps above the deep glacial Lauterbrunnen valley, containing 72 waterfalls, is well known for the Jungfrau (4,158 m or 13,642 ft) and Eiger, and the many picturesque valleys in the region. In the southeast the long Engadin Valley, encompassing the St. Moritz area in canton Graubünden, is also well known; the highest peak in the neighbouring Bernina Alps is Piz Bernina (4,049 m or 13,284 ft).

The more populous northern part of the country, comprising about 30% of the country’s total area, is called the Middle Land. It has greater open and hilly landscapes, partly forested, partly open pastures, usually with grazing herds, or vegetables and fruit fields, but it is still hilly. There are large lakes found here and the biggest Swiss cities are in this area of the country. The largest lake is Lake Geneva (also called Lac Léman in French), in western Switzerland. The Rhone River is both the main input and output of Lake Geneva.

Resident foreigners and temporary foreign workers make up about 22% of the population. Most of these (60%) are from European Union or EFTA countries. Italians are the largest single group of foreigners with 17.3% of total foreign population. They are followed by Germans (13.2%), immigrants from Serbia and Montenegro (11.5%) as well as Portugal (11.3%). Immigrants from Sri Lanka, most of them former Tamil refugees, are the largest group among people of Asian origin. Additionally, a 2008 study showed that 30.6% of the Swiss permanent resident population aged 15 or over, i.e. 1,965,000 persons, had an immigrant background. A third of this population (651,000) have Swiss citizenship. Four fifths of persons with an immigration background are themselves immigrants (first generation of foreigners as well as native-born and naturalized Swiss citizens), whereas one fifth were born in Switzerland (second-generation foreigners as well as native-born and naturalized Swiss citizens). In the 2000s, domestic and international institutions expressed concern about what they perceived as an increase in xenophobia, particularly in some political campaigns. In reply to one critical report the Federal Council noted that “racism unfortunately is present in Switzerland”, but stated that the high proportion of foreign citizens in the country, as well as the generally unproblematic integration of foreigners”, underlined Switzerland’s openness.

The Swiss Confederation consists of 26 cantons.

The cantons have a permanent constitutional status and, in comparison with the situation in other countries, a high degree of independence. Under the Federal Constitution, all 26 cantons are equal in status. Each canton has its own constitution, and its own parliament, government and courts. However, there are considerable differences between the individual cantons, most particularly in terms of population and geographical area. Their populations vary between 15,000 (Appenzell Innerrhoden) and 1,253,500 (Zürich), and their area between 37 km2 (14 sq mi) (Basel-Stadt) and 7,105 km2 (2,743 sq mi) (Graubünden). The Cantons comprise a total of 2,485 municipalities. Within Switzerland there are two enclaves: Büsingen belongs to Germany, Campione d’Italia belongs to Italy.

In a referendum held in the Austrian state of Vorarlberg on 11 May 1919, over 80% of those voting supported a proposal that the state should join the Swiss Confederation. However, this was prevented by the opposition of the Austrian Government, the Allies, Swiss liberals and non-German-speaking Swiss.

Switzerland has a stable, prosperous and high-tech economy. In 2011 it was ranked as the wealthiest country in the world in per capita terms (with “wealth” being defined to include both financial and non-financial assets), while the 2013 Credit Suisse Global Wealth Report showed that Switzerland was the country with the highest average wealth per adult in 2013. It has the world’s nineteenth largest economy by nominal GDP and the thirty-sixth largest by purchasing power parity. It is the twentieth largest exporter, despite its size. Switzerland has the highest European rating in the Index of Economic Freedom 2010, while also providing large coverage through public services. The nominal per capita GDP is higher than those of the larger Western and Central European economies and Japan. If adjusted for purchasing power parity, Switzerland ranks 8th in the world in terms of GDP per capita, according to the World Bank and IMF (ranked 15th according to the CIA Worldfactbook).

The World Economic Forum’s Global Competitiveness Report currently ranks Switzerland’s economy as the most competitive in the world, while ranked by the European Union as Europe’s most innovative country. For much of the 20th century, Switzerland was the wealthiest country in Europe by a considerable margin (by GDP – per capita). In 2007 the gross median household income in Switzerland was an estimated 137,094 USD at Purchasing power parity while the median income was 95,824 USD. Switzerland also has one of the world’s largest account balances as a percentage of GDP.

Switzerland’s most important economic sector is manufacturing. Manufacturing consists largely of the production of specialist chemicals, health and pharmaceutical goods, scientific and precision measuring instruments and musical instruments. The largest exported goods are chemicals (34% of exported goods), machines/electronics (20.9%), and precision instruments/watches (16.9%). Exported services amount to a third of exports. The services sector – especially banking and insurance, tourism, and international organisations – is another important industry for Switzerland.

Around 3.8 million people work in Switzerland; about 25% of employees belonged to a trade union in 2004. Switzerland has a more flexible job market than neighbouring countries and the unemployment rate is very low. The unemployment rate increased from a low of 1.7% in June 2000 to a peak of 4.4% in December 2009. Population growth from net immigration is quite high, at 0.52% of population in 2004. The foreign citizen population was 21.8% in 2004, about the same as in Australia. GDP per hour worked is the world’s 16th highest, at 49.46 international dollars in 2012.

Switzerland has an overwhelmingly private sector economy and low tax rates by Western World standards; overall taxation is one of the smallest of developed countries. Switzerland is a relatively easy place to do business, currently ranking 28th of 178 countries in the Ease of Doing Business Index. The slow growth Switzerland experienced in the 1990s and the early 2000s has brought greater support for economic reforms and harmonization with the European Union. According to Credit Suisse, only about 37% of residents own their own homes, one of the lowest rates of home ownership in Europe. Housing and food price levels were 171% and 145% of the EU-25 index in 2007, compared to 113% and 104% in Germany.

Agricultural protectionism—a rare exception to Switzerland’s free trade policies—has contributed to high food prices. Product market liberalisation is lagging behind many EU countries according to the OECD. Nevertheless, domestic purchasing power is one of the best in the world. Apart from agriculture, economic and trade barriers between the European Union and Switzerland are minimal and Switzerland has free trade agreements worldwide. Switzerland is a member of the European Free Trade Association (EFTA).

Three of Europe’s major languages are official in Switzerland. Swiss culture is characterised by diversity, which is reflected in a wide range of traditional customs. A region may be in some ways strongly culturally connected to the neighbouring country that shares its language, the country itself being rooted in western European culture. The linguistically isolated Romansh culture in Graubünden in eastern Switzerland constitutes an exception, it survives only in the upper valleys of the Rhine and the Inn and strives to maintain its rare linguistic tradition.

Switzerland is home to many notable contributors to literature, art, architecture, music and sciences. In addition the country attracted a number of creative persons during time of unrest or war in Europe. Some 1000 museums are distributed through the country; the number has more than tripled since 1950. Among the most important cultural performances held annually are the Lucerne Festival, the Montreux Jazz Festival and the Locarno International Film Festival.

Alpine symbolism has played an essential role in shaping the history of the country and the Swiss national identity. Nowadays some concentrated mountain areas have a strong highly energetic ski resort culture in winter, and a hiking (wandering) or Mountain biking culture in summer. Other areas throughout the year have a recreational culture that caters to tourism, yet the quieter seasons are spring and autumn when there are fewer visitors. A traditional farmer and herder culture also predominates in many areas and small farms are omnipresent outside the cities. Folk art is kept alive in organisations all over the country. In Switzerland it is mostly expressed in music, dance, poetry, wood carving and embroidery. The alphorn, a trumpet-like musical instrument made of wood, has become alongside yodeling and the accordion an epitome of traditional Swiss music.