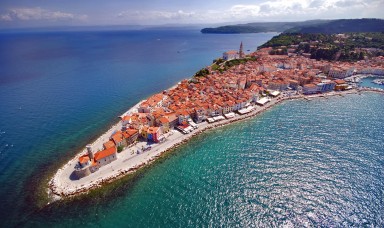 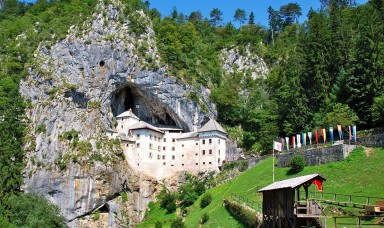 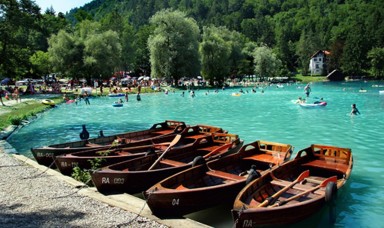 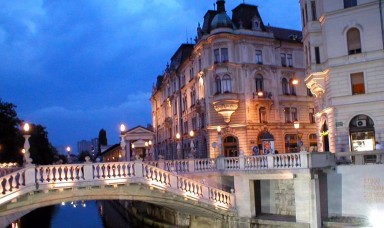 Slovenia is a nation state in southern Central Europe at the crossroads of main European cultural and trade routes. It borders Italy to the west, Austria to the north, Croatia to the south and southeast, and Hungary to the northeast. It covers 20,273 square kilometers (7,827 sq mi) and has a population of 2.05 million. It is a parliamentary republic and a member of the European Union and NATO. Its capital and largest city is Ljubljana.

Slovenia is situated in Central and Southeastern Europe touching the Alps and bordering the Mediterranean. It lies between latitudes 45° and 47° N, and longitudes 13° and 17° E. The 15th meridian east almost corresponds to the middle line of the country in the direction west-east. The Geometrical Center of the Republic of Slovenia is located at coordinates 46°07’11.8″ N and 14°48’55.2″ E. It lies in Slivna in the Municipality of Litija. Slovenia’s highest peak is Triglav (2,864 m or 9,396 ft); the country’s average height above sea level is 557 m (1,827 ft).

Four major European geographic regions meet in Slovenia: the Alps, the Dinarides, the Pannonian Plain, and the Mediterranean. Although on the shore of the Adriatic Sea near the Mediterranean Sea, most of Slovenia is in the Black Sea drainage basin. The Alps—including the Julian Alps, the Kamnik-Savinja Alps and the Karavanke chain, as well as the Pohorje massif—dominate Northern Slovenia along its long border with Austria. Slovenia’s Adriatic coastline stretches approximately 47 km (29 mi) from Italy to Croatia.

The term “Karst topography” refers to that of southwestern Slovenia’s Kras Plateau, a limestone region of underground rivers, gorges, and caves, between Ljubljana and the Mediterranean. On the Pannonian plain to the East and Northeast, toward the Croatian and Hungarian borders, the landscape is essentially flat. However, the majority of Slovenian terrain is hilly or mountainous, with around 90% of the surface 200 m (656 ft) or more above sea level.

Over half of the country (10,124 km2 or 3,909 sq mi) is covered by forests. This makes Slovenia the third most forested country in Europe, after Finland and Sweden. The areas are covered mostly by beech, fir-beech and beech-oak forests and have a relatively high production capacity. Remnants of primeval forests are still to be found, the largest in the Kočevje area. Grassland covers 5,593 km2 (2,159 sq mi) and fields and gardens (954 km2 or 368 sq mi). There are 363 km2 (140 sq mi) of orchards and 216 km2 (83 sq mi) of vineyards.

With 101 inhabitants per square kilometer (262/sq mi), Slovenia ranks low among the European countries in population density (compared to 402/km² (1042/sq mi) for the Netherlands or 195/km² (505/sq mi) for Italy). The Notranjska-Kras statistical region has the lowest population density while the Central Slovenian statistical region has the highest.

According to the 2002 census, Slovenia’s main ethnic group are the Slovenes (83%), however their share in the total population is continuously decreasing due to their relatively low fertility rate. At least 13% (2002) of the population were immigrants from other parts of Former Yugoslavia and their descendants. They have settled mainly in cities and suburbanised areas. Relatively small but protected by the Constitution of Slovenia are the Hungarian and the Italian ethnic minority. A special position is held by the autochthonous and geographically dispersed Roma ethnic community.

Slovenia is among the European countries with the most pronounced ageing of population, ascribable to a low birth rate and increasing life expectancy. Almost all Slovenian inhabitants older than 64 are retired, with no significant difference between the genders. The working-age group is diminishing in spite of immigration. The proposal to raise the retirement age from the current 57 for women and 58 for men was rejected in a referendum in 2011. In addition, the difference among the genders regarding life expectancy is still significant. In 2007, it was 74.6 years for men and 81.8 years for women.

In 2009, the suicide rate in Slovenia was 22 per 100,000 persons per year, which places Slovenia among the highest ranked European countries in this regard. Nonetheless, from 2000 until 2010, the rate has decreased by about 30%. The differences between regions and the genders are pronounced.

Slovenia has a developed economy and is per capita the richest of Slavic states.citation nee The country was in the beginning of 2007 the first new member to introduce the euro as its currency, replacing the tolar. Since 2010, it has been member of the Organisation for Economic Co-operation and Development.

The new generation of comedians include stand up comedians, such as Tin Vodopivec, who co-founded the Punch Festival, the radio host and impersonator Denis Avdić, and The Elephant and a Fruit group.