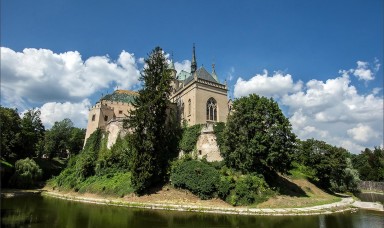 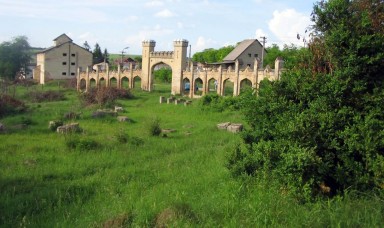 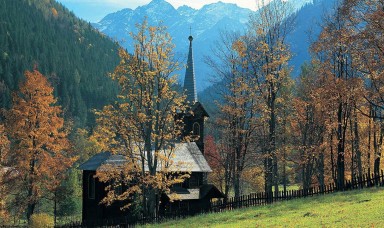 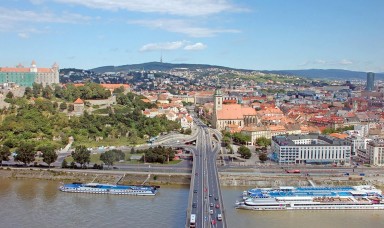 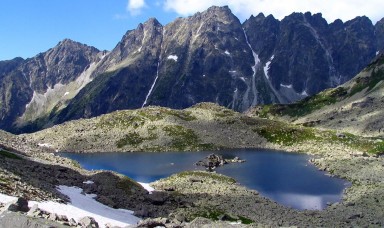 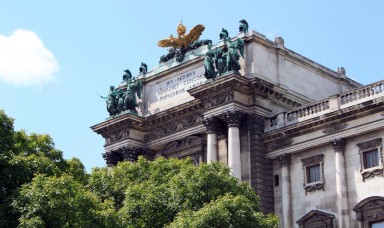 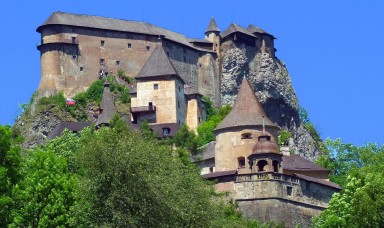 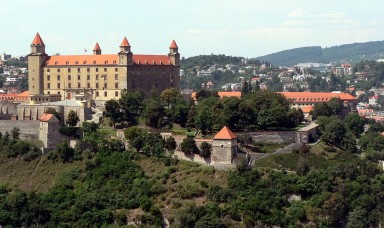 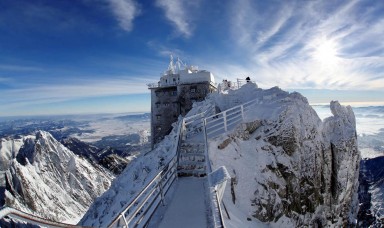 It has a population of over five million and an area of about 49,000 square kilometres (19,000 sq mi). Slovakia is bordered by the Czech Republic and Austria to the west, Poland to the north, Ukraine to the east and Hungary to the south. The largest city is the capital, Bratislava, and the second largest is Košice. Slovakia is a member state of the European Union, NATO, United Nations, OECD and WTO among others. The official language is Slovak, a member of the Slavic language family.

The Slovak landscape is noted primarily for its mountainous nature, with the Carpathian Mountains extending across most of the northern half of the country. Amongst these mountain ranges are the high peaks of the Fatra-Tatra Area (including Tatra mountains, Greater Fatra and Lesser Fatra), Slovak Ore Mountains, Slovak Central Mountains or Beskids. The largest lowland is the fertile Danubian Lowland in the southwest, followed by the Eastern Slovak Lowland in the southeast.

In 2007 Slovakia was estimated to have a total fertility rate of 1.33 (i.e., the average woman will have 1.33 children in her lifetime), which is significantly below the replacement level and is one of the lowest rates among EU countries.

The Slovaks endured the largest wave of emigration at the end of the 19th and the beginning of the 20th century. In the 1990 U.S. census, 1.8 million people identified themselves as being of Slovak ancestry.

As for administrative division, Slovakia is subdivided into 8 krajov (singular – kraj, usually translated as “region”), each of which is named after its principal city. Regions have enjoyed a certain degree of autonomy since 2002. Their self-governing bodies are referred to as Self-governing (or autonomous) Regions (sg. samosprávny kraj, pl. samosprávne kraje) or Upper-Tier Territorial Units (sg. vyšší územný celok, pl. vyššie územné celky, abbr. VÚC).

The “kraje” are subdivided into many okresy (sg. okres, usually translated as districts). Slovakia currently has 79 districts.

In terms of economics and unemployment rate, the western regions are richer than eastern regions; however the relative difference is no bigger than in most EU countries having regional differences.

The Slovak economy is considered an advanced economy, with the country dubbed the “Tatra Tiger”. Slovakia transformed from a centrally planned economy to a market-driven economy. Major privatizations are nearly complete, the banking sector is almost completely in private hands, and foreign investment has risen.

Before the global recession, Slovakia had experienced high and sustained economic growth. In 2007 (with GDP growth of 10.5%), 2008 (6%) and 2010 (with 4%), Slovakia was the fastest growing economy in the European Union. In 2011 (with the GDP growth of 3.3%), Slovakia was the 2nd fastest growing Eurozone member (after Estonia). According to the European Economic Forecast, released by the European Commission in the spring 2012, Slovakia’s predicted growth of 1.8% in 2012, will be the highest in the Eurozone and 4th highest in the EU-27.

The ratio of government debt to GDP in Slovakia is 41%, the 4th lowest in the Eurozone.

Unemployment, peaking at 19% at the end of 1999, decreased to 7.5% in October 2008 according to the Statistical Office of the Slovak Republic. In addition to economic growth, migration of workers to other EU countries also contributed to this reduction. According to Eurostat, which uses a calculation method different from that of the Statistical Office of the Slovak Republic, the unemployment rate in September 2012 is at 13.9% the third highest in the Eurozone (after Spain and Portugal).

Slovakia adopted the Euro currency on 1 January 2009 as the 16th member of the Eurozone. The euro in Slovakia was approved by the European commission on 7 May 2008. The Slovak koruna was revalued on 28 May 2008 to 30.126 for 1 euro, which was also the exchange rate for the euro.

Slovakia is an attractive country for foreign investors mainly because of its low wages, low tax rates and well educated labour force. In recent years, Slovakia has been pursuing a policy of encouraging foreign investment. FDI inflow grew more than 600% from 2000 and cumulatively reached an all-time high of $17.3 billion in 2006, or around $22,000 per capita by the end of 2008.

Despite a sufficient number of researchers and a decent secondary educational system, Slovakia, along with other post-communist countries, still faces major challenges in the field of the knowledge economy. The business and public research and development expenditures are well below the EU average. The Programme for International Student Assessment, coordinated by the OECD, currently ranks Slovak secondary education the 30th in the world (placing it just below the United States and just above Spain).

In March 2008, the Ministry of Finance announced that Slovakia’s economy is developed enough to stop being an aid receiver from the World Bank. Slovakia became an aid provider at the end of 2008.

The culture of Slovakia is the result of various folk traditions and because of its position in the Central Europe, it is also influenced by Austrian, German, Hungarian and Slavic cultures.