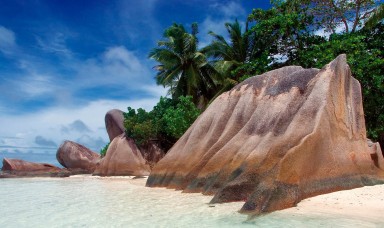 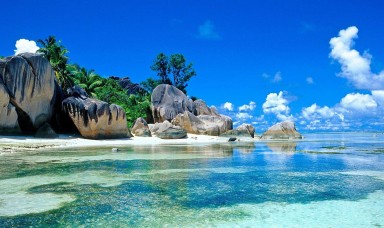 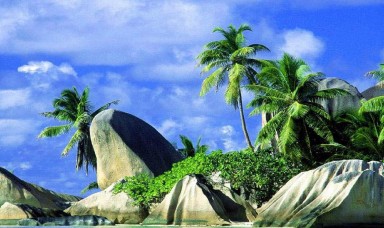 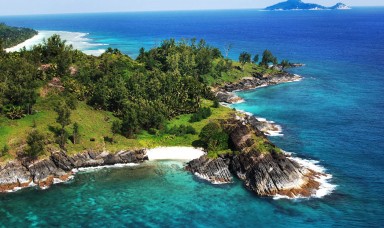 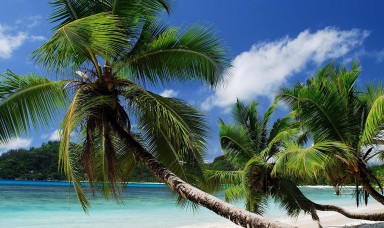 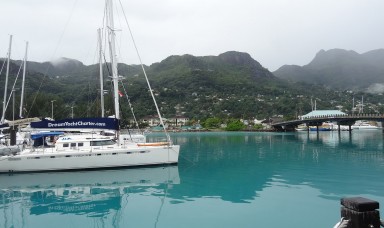 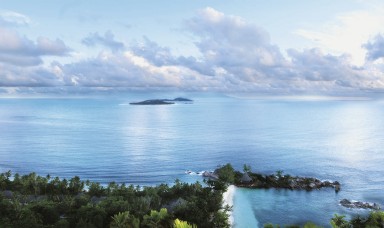 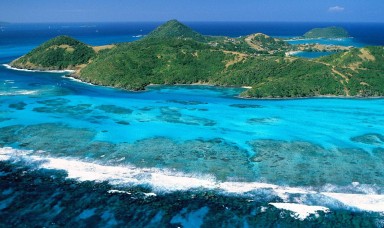 Seychelles, officially the Republic of Seychelles (French: République des Seychelles; Creole: Repiblik Sesel), is a 155-island country (as per the Constitution) spanning an archipelago in the Indian Ocean, whose capital, Victoria, lies some 1,500 kilometres (932 mi) east of mainland Southeast Africa, northeast of the island of Madagascar.

An island nation, Seychelles is located to the northeast of Madagascar and about 1,600 km (994 mi) east of Kenya. The number of islands in the archipelago is often given as 115 but the Constitution of the Republic of Seychelles lists 155. Only 40 islands are inhabited. The islands as per the Constitution are divided into groups as follows.

There are two coral sand cays north of the granitics: Denis and Bird.

There are two coral islands south of the Granitics: Coëtivy and Platte.

According to the president of Nauru, the Seychelles has been ranked the ninth most endangered nation due to flooding from climate change.

When the British gained control of the islands during the Napoleonic Wars, they allowed the French upper class to retain their land. Both the French and British settlers used enslaved Africans and although the British prohibited slavery in 1835, African workers continued to come. Thus the Gran’bla (“big whites”) of French origin dominated economic and political life. The British administration employed Indians on indentured servitude to the same degree as in Mauritius resulting in a small Indian population. The Indians, like a similar minority of Chinese, were confined to a merchant class. Today the descendents of the Indian, Chinese, and Gran’bla form distinct ethnic communities, although most people are of ‘black’ African origin, often mixed with ‘white’ European or Asian heritage.

As the islands of Seychelles had no indigenous population, the current Seychellois are composed of people who have immigrated. The largest ethnic groups are those of African, French, Indian, and Chinese descent. French and English are official languages along with Seychellois Creole, which is primarily based upon French.

According to the 2002 census, most Seychellois are Christians: 82.3% are Roman Catholic, 6.4% are Anglican and 4.5% are of other Christian denominations. There are small minorities who practice Hinduism (2.1%) and Islam (1.1%). Other non-Christian faiths account for 1.5% of the population while a further 2.1% were non-religious or did not specify a religion. The median age of Seychellois is 32 years.

Seychelles is divided into twenty-six administrative regions that comprise all of the inner islands. Eight of the districts make up the capital of Seychelles and are referred to as Greater Victoria. Another 14 districts are considered the rural part of the main island of Mahé with two districts on Praslin and one on La Digue which also includes respective satellite islands. The rest of the Outer Islands (Îles Eloignées) are the last district, recently created by the tourism ministry.

During the plantation era, cinnamon, vanilla and copra were the chief exports. In the 1960s, about 33% of the working population worked at plantations, and 20% worked in the public or government sector. In 1965, during a three-month visit to the islands, futurist Donald Prell prepared for the then crown colony Governor General, an economic report containing a scenario for the future of the economy. In 1964–65 the Seychelles connection to the outside world consisted of (1) excellent telegraphic service, (2) weekly seaplane service from Mombasa, Kenya, and (3) a monthly visit of the 10,304 ton British India Line’s passenger ship M.S. Kampala. Mahé, Seychelles was a stopover port on the ship’s round trip voyage from Mombasa, to Bombay. The island’s population of 47,000 was about half of what it grew to be in 2011. In 1964, the major sources of funds supporting the island’s economy included: (1) Agricultural exports, Rs. 8,660,000, (2) Grants in aid and other funding from British government, Rs. 2,920,000, (3) Funding from the United States covering the operating cost of the Indian Ocean Tracking Station, (part of the US Air Force Satellite Control Network), Rs. 4,500,000, (4) Invisible exports (funds received from sources outside the Seychelles) including, pensions and allotments to retired British expatriates, bank transfers from abroad and miscellaneous purchases, Rs. 3,260,000, and (5) Tourism, Rs. 860,000. The total value of imports (including freight, insurance) and miscellaneous funds transferred abroad, totalled Rs. 16,500,000, resulting in a surplus to the economy of Rs. 3,700,000. The report recommended establishing a Seychelles Development Corporation. The Indian Ocean Tracking Station on Mahé, was closed in August 1996 after the Seychelles government attempted to raise the rent to more than $10,000,000 per year.

Since independence in 1976, per capita output has expanded to roughly seven times the old near-subsistence level. Growth has been led by the tourist sector, which employs about 30% of the labour force, compared to agriculture which today employs about 3% of the labour force. Despite the growth of tourism, farming and fishing continue to employ some people, as do industries that process coconuts and vanilla. The prime agricultural products currently produced in the Seychelles include sweet potatoes, vanilla, coconuts and cinnamon. These products provide much of the economic support of the locals. Frozen and canned fish, copra, cinnamon and vanilla are the main export commodities.

Since the worldwide economic crises of 2008, the Seychelles government has prioritised a curbing of the budget deficit, including the containment of social welfare costs and further privatisation of public enterprises. The government has a pervasive presence in economic activity, with public enterprises active in petroleum product distribution, banking, imports of basic products, telecommunications and a wide range of other businesses. According to the 2013 Index of Economic Freedom, which measures the degree of limited government, market openness, regulatory efficiency, rule of law, and other factors, economic freedom has been increasing each year since 2010.

Seychellois society is essentially matriarchal. Mothers tend to be dominant in the household, controlling most expenditures and looking after the interests of the children. Unwed mothers are the societal norm, and the law requires fathers to support their children. Men are important for their earning ability, but their domestic role is relatively peripheral. Older women usually have financial support from family members living at home or contributions from the earnings of grown children.

The district clock tower in the centre of Victoria, the capital of Seychelles.

The music of Seychelles is diverse. The folk music of the islands incorporates multiple influences in a syncretic fashion, including African rhythms, aesthetic and instrumentation—such as the zez and the bom (known in Brazil as berimbau), European contredanse, polka and mazurka, French folk and pop, sega from Mauritius and Réunion, taarab, soukous and other pan-African genres, and Polynesian, Indian and Arcadian music. A complex form of percussion music called contombley is popular, as is Moutya, a fusion of native folk rhythms with Kenyan benga.