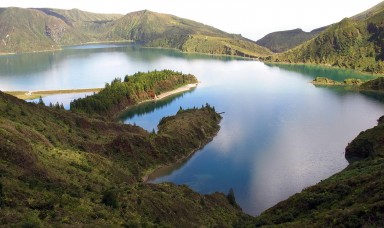 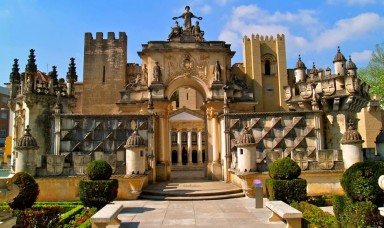 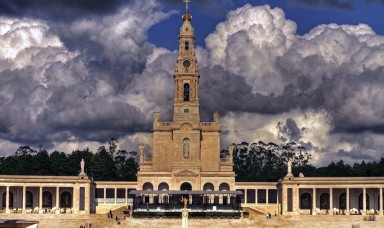 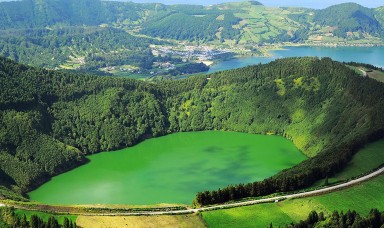 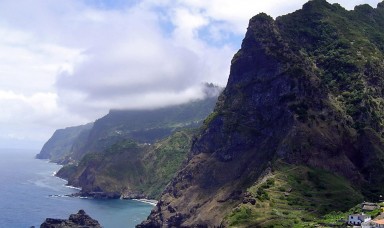 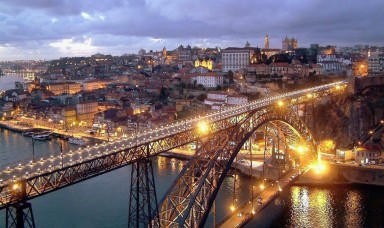 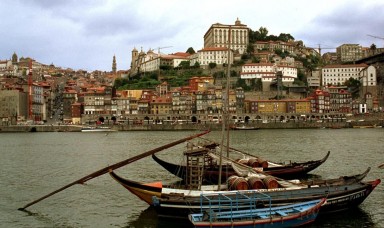 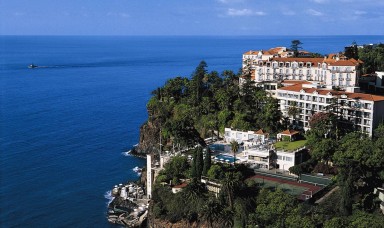 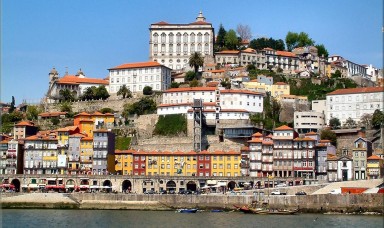 Portugal (UK English pronunciation: /ˈpɔːtʃʊɡl/; Portuguese: Portugal, IPA: ), officially the Portuguese Republic (Portuguese: República Portuguesa), is a unitary semi-presidential republic. It is located in South-Western Europe, on the Iberian Peninsula, and it is the westernmost country of mainland Europe, being bordered by the Atlantic Ocean to the west and south and by Spain to the north and east. Aside from continental Portugal, the Portuguese Republic holds sovereignty over the Atlantic archipelagos of Azores and Madeira, which are autonomous regions of Portugal. The country is named after its second largest city, Porto, whose Latin name was Portus Cale.

The territory of Portugal includes an area in the Iberian Peninsula (referred to as the continent by most Portuguese) and two archipelagos in the Atlantic Ocean: the archipelagos of Madeira and the Azores. It lies between latitudes 32° and 43° N, and longitudes 32° and 6° W.

Mainland Portugal is split by its main river, the Tagus that flows from Spain and disgorges in Tagus Estuary, in Lisbon, before escaping into the Atlantic. The northern landscape is mountainous towards the interior with several plateaus indented by river valleys, whereas the south, that includes the Algarve and the Alentejo regions, is characterized by rolling plains.

Portugal’s highest peak is the similarly named Mount Pico on the island of Pico in the Azores. This ancient volcano, which measures 2,351 m (7,713 ft) is an iconic symbol of the Azores, while the Serra da Estrela on the mainland (the summit being 1,991 m (6,532 ft) above sea level) is an important seasonal attraction for skiers and winter sports enthusiasts.

The archipelagos of Madeira and the Azores are scattered within the Atlantic Ocean: the Azores straddling the Mid-Atlantic Ridge on a tectonic triple junction, and Madeira along a range formed by in-plate hotspot geology. Geologically, these islands were formed by volcanic and seismic events, although the last terrestrial volcanic eruption occurred in 1957–58 (Capelinhos) and minor earthquakes occur sporadically, usually of low intensity.

The Instituto Nacional de Estatística (Portuguese: National Institute of Statistics) estimates that, according to the 2011 census, the population was 10,562,178 (of which 52% was female, 48% was male). This population has been relatively homogeneous for most of its history: a single religion (Catholicism) and a single language have contributed to this ethnic and national unity, namely after the expulsion of the Moors, Moriscos and Sephardi Jews. A large number of Moors and Sephardic Jews, nevertheless, stayed in Portugal, under the condition that they converted to Catholicism, and afterwards they were known as Moriscos (former Muslims), New Christians or Marranos (former Jews) some of whom may have continued to observe rabbinic Judaism in secret. After 1772 the distinction between Old and New Christians was abolished by decree. Some famous Portuguese New Christians were the mathematician Pedro Nunes and the physician and naturalist Garcia de Orta. Former Portuguese President Jorge Sampaio is a Sephardic Jew through his maternal grandmother, though as an agnostic, he doesn’t practice any religion.

Native Portuguese are an Iberian ethnic group, whose ancestry is very similar to other Western and Southern Europeans and Mediterranean peoples, in particular Spaniards, with whom they share a common ancestry, history and cultural proximity.

The most important demographic influence in the modern Portuguese seems to be the oldest one; current interpretation of Y-chromosome and mtDNA data suggests that the Portuguese have their origin in Paleolithic peoples that began arriving to the European continent around 45,000 years ago. All subsequent migrations did leave an impact, genetically and culturally, but the main population source of the Portuguese is still Paleolithic. Studies of mitochondrial DNA suggest that 7% and 5–9% of modern Portuguese have some North- and Subsaharan-African ancestry, respectively. Other genetic studies show Iberian populations not significantly different from other European populations.

The total fertility rate (TFR) as of 2013 was estimated at 1.51 children born/woman, which is below the replacement rate of 2,1. In 2012, 45.6% of births were to unmarried women. Like most Western countries, Portugal has to deal with low fertility levels: the country has experienced a sub-replacement fertility rate since the 1980s.

Administratively, Portugal is divided into 308 municipalities (Portuguese: municípios or concelhos), which are subdivided into 4,260 civil parishes (Portuguese: freguesia). Operationally, the municipality and civil parish, along with the national government, are the only legally identifiable local administrative units identified by the government of Portugal (for example, cities, towns or villages have no standing in law, although may be used as catchment for the defining services). For statistical purposes the Portuguese government also identifies NUTS, inter-municipal communities and informally, the district system, used until European integration (and being phased-out by the national government). Continental Portugal is agglomerated into 18 districts, while the archipelagos of the Azores and Madeira are governed as autonomous regions; the largest units, established since 1976, are either mainland Portugal (Portuguese: Portugal Continental) and the autonomous regions of Portugal (Azores and Madeira).

Within the European Union NUTS (Nomenclature of Territorial Units for Statistics) system, Portugal is divided into seven regions: the Azores, Alentejo, Algarve, Centro, Lisboa, Madeira and Norte, and with the exception of the Azores and Madeira, these NUTS areas are subdivided into 28 subregions.

The Portuguese currency is the euro (€), which replaced the Portuguese Escudo, and the country was one of the original member states of the eurozone. Portugal’s central bank is the Banco de Portugal, an integral part of the European System of Central Banks. Most industries, businesses and financial institutions are concentrated in the Lisbon and Porto metropolitan areas—the Setúbal, Aveiro, Braga, Coimbra and Leiria districts are the biggest economic centres outside these two main areas.

Since the Carnation Revolution of 1974, which culminated in the end of one of Portugal’s most notable phases of economic expansion (that started in the 1960s), a significant change has occurred in the nation’s annual economic growth. After the turmoil of the 1974 revolution and the PREC period, Portugal tried to adapt to a changing modern global economy, a process that continues in 2013. Since the 1990s, Portugal’s public consumption-based economic development model has been slowly changing to a system that is focused on exports, private investment and the development of the high-tech sector. Consequently, business services have overtaken more traditional industries such as textiles, clothing, footwear and cork (Portugal is the world’s leading cork producer), wood products and beverages.

In the second decade of the 21st century the Portuguese economy suffered its most severe recession since the 1970s and 2013 was the final year of a three-year European Union aid program. It is anticipated that the conclusion of the EU’s support package, worth €78 billion, will leave Portugal with a €12 billion funding gap in 2014. Forecasts from the EU and the International Monetary Fund (IMF) predicted that the Portuguese unemployment rate will peak in 2014 at 18.5 per cent.

Portugal has developed a specific culture while being influenced by various civilizations that have crossed the Mediterranean and the European continent, or were introduced when it played an active role during the Age of Discovery. In the 1990s and 2000s (decade), Portugal modernized its public cultural facilities, in addition to the Calouste Gulbenkian Foundation established in 1956 in Lisbon. These include the Belém Cultural Centre in Lisbon, Serralves Foundation and the Casa da Música, both in Porto, as well as new public cultural facilities like municipal libraries and concert halls that were built or renovated in many municipalities across the country.

Portugal is home to fifteen UNESCO World Heritage Sites, ranking it 8th in Europe and 17th in the world.