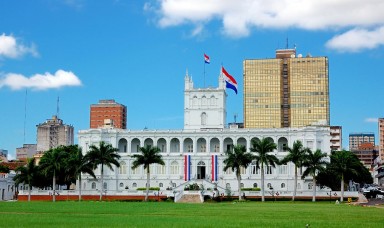 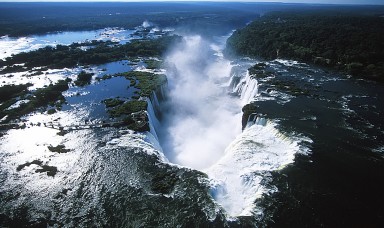 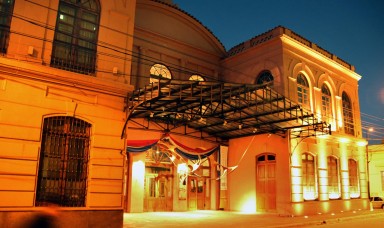 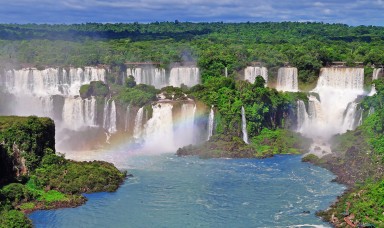 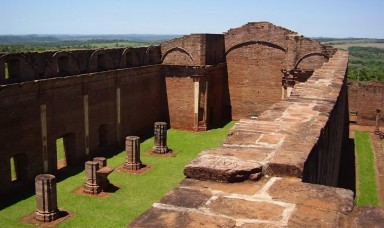 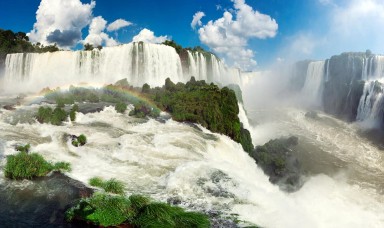 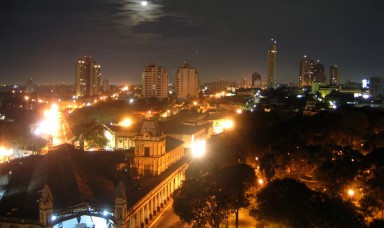 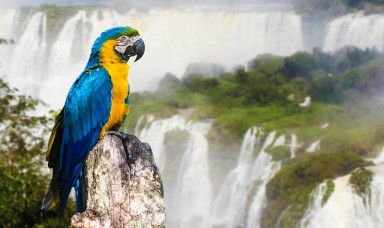 Paraguay (US /pɛərəɡwaɪ/, UK /pærəɡwaɪ/), officially the Republic of Paraguay (Spanish: República del Paraguay ðel paɾaˈɣwaj], Guaraní: Tetã Paraguái paɾaˈɣwaj]), is a landlocked country in South America, bordered by Argentina to the south and southwest, Brazil to the east and northeast, and Bolivia to the northwest. Paraguay lies on both banks of the Paraguay River, which runs through the center of the country from north to south. Due to its central location in South America, it is sometimes referred to as Corazón de América (“Heart of America”).

Paraguay is divided by the Río Paraguay into the eastern region, called Eastern Paraguay (Paraguay Oriental) but also known as the Paraná region; and the western region, officially called Western Paraguay (Paraguay Occidental) and also known as the Gran Chaco or Chaco. The country lies between latitudes 19° and 28°S, and longitudes 54° and 63°W. The terrain consists of grassy plains and wooded hills in the east. To the west are mostly low, marshy plains.

Paraguay’s population is distributed unevenly through the country, with the vast majority of people living in the eastern region near the capital and largest city, Asunción, which accounts for 10% of the country’s population. The Gran Chaco region, which includes the Alto Paraguay, Boquerón and Presidente Hayes Department, and accounts for about 60% of the territory, is home to less than 2% of the population. About 56% of Paraguayans live in urban areas, making Paraguay one of the least urbanized nations in South America.

For most of its history, Paraguay has been a recipient of immigrants, owing to its low population density, especially after the demographic collapse that resulted from the Paraguayan War. Small groups of ethnic Italians, Germans, Russians, Japanese, Koreans, Chinese, Arabs, Ukrainians, Brazilians, and Argentinians have also settled in Paraguay. Many of these communities have retained their languages and culture, particularly the Brazilians, who represent the largest and most prominent immigrant group, at around 400,000. Many Brazilian Parguayans are of German, Italian and Polish descent. There are an estimated 63,000 Afro-Paraguayans, comprising 1% of the population.

There is no official data on the ethnic composition of the Paraguayan population, as the Department of Statistics, Surveys and Censuses of Paraguay does not ask about race and ethnicity in census surveys, although it does inquire about the indigenous population. According to the census of 2002, the indigenous people made up 1.7% of Paraguay’s total population.

Traditionally, the majority of the Paraguayan population is considered mixed (mestizo in Spanish). According to the CIA World Factbook, Paraguay has a population of 6,669,086, 95% of which are mestizo (mixed European and Amerindian) and 5% are labelled as “other”, which includes members of indigenous tribal groups. They are divided into 17 distinct ethnolinguistic groupings, many of which are poorly documented.

Paraguay has one of the most prominent German communities in South America, with some 25,000 German-speaking Mennonites living in the Paraguayan Chaco. German settlers founded several towns as Hohenau, Filadelfia, Neuland, Obligado and Nueva Germania. Several websites that promote German immigration to Paraguay claim that 5–7% of the population is of German ancestry, including 150,000 people of German-Brazilian descent.

It is also divided into 2 regions: The “Occidental Region” or Chaco (Boquerón, Alto Paraguay and Presidente Hayes), and the “Oriental Region” (the other departments and the capital district).

Landlocked Paraguay has a market economy distinguished by a large informal sector, featuring re-export of imported consumer goods to neighboring countries, as well as the activities of thousands of microenterprises and urban street vendors. Between 1970 and 2009 the country had the highest economic growth of South America, with an average rate of 7.2% per year and the prospect of 9% annual growth from 2010, being the highest in South America.

The country also boasts the third most important free commercial zone in the world: Ciudad del Este, trailing behind Miami and Hong Kong. A large percentage of the population, especially in rural areas, derives its living from agricultural activity, often on a subsistence basis. Because of the importance of the informal sector, accurate economic measures are difficult to obtain. On a per capita basis, real income has stagnated at 1980 levels. The economy grew rapidly between 2003 and 2008 as growing world demand for commodities combined with high prices and favorable weather to support Paraguay’s commodity-based export expansion. Paraguay is the sixth-largest soybean producer in the world. Drought hit in 2008, reducing agricultural exports and slowing the economy before the onset of the global recession.

In 2010, Paraguay experienced the greatest economic expansion of the zone and the highest of South America, with a GDP growth rate of 14.5% by the end of the year. The following year, Paraguay’s growth rate remained a relatively high 6.4%;

Paraguay’s cultural heritage can be traced to the extensive intermarriage between the original male Spanish settlers and female indigenous Guaraní brides. Their culture is highly influenced by various European countries, including Spain. Therefore, Paraguayan culture is a fusion of two cultures and traditions: one European, the other, Southern Guaraní. More than 93% of Paraguayans are mestizos, making Paraguay one of the most homogeneous countries in Latin America. A characteristic of this cultural fusion is the extensive bilingualism present to this day: more than 80% of Paraguayans speak both Spanish and the indigenous language, Guaraní. Jopara, a mixture of Guaraní and Spanish, is also widely spoken.

This cultural fusion is expressed in arts such as embroidery (ao po’í) and lace making (ñandutí). The music of Paraguay, which consists of lilting polkas, bouncy galopas, and languid guaranías is played on the native harp. Paraguay’s culinary heritage is also deeply influenced by this cultural fusion. Several popular dishes contain manioc, a local staple crop similar to the yuca also known as Cassava root found in the Southwestern United States and Mexico, as well as other indigenous ingredients. A popular dish is sopa paraguaya, similar to a thick corn bread. Another notable food is chipa, a bagel-like bread made from cornmeal, manioc, and cheese. Many other dishes consist of different kinds of cheeses, onions, bell peppers, cottage cheese, cornmeal, milk, seasonings, butter, eggs and fresh corn kernels.

The 1950s and 1960s saw the flowering of a new generation of Paraguayan novelists and poets such as José Ricardo Mazó, Roque Vallejos, and Nobel Prize nominee Augusto Roa Bastos. Several Paraguayan films have been made.

Social life revolves largely around an extended family of parents, children and blood relations, as well as godparents. The Paraguayans’ chief loyalty is to their family, and it, in turn, is their haven and support. Family interests determine to a large extent which political party they will join, whom they will marry, what sort of job they will get, whether they will win a lawsuit, and—in some cases—whether they would be wise to emigrate for a time. Even so, Paraguayans are very heartwarming and open to tourists and foreigners.

Inside the family, conservative values predominate. In lower classes, godparents have a special relationship to the family, since usually, they are chosen because of their favorable social position, in order to provide extra security for the children. Particular respect is owed them, in return for which the family can expect protection and patronage.