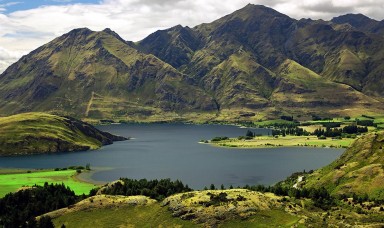 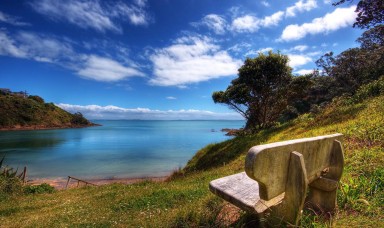 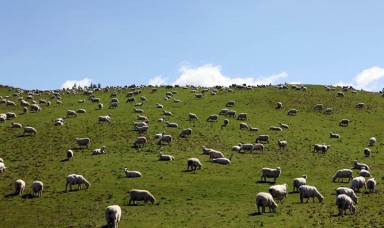 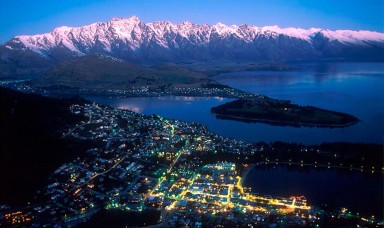 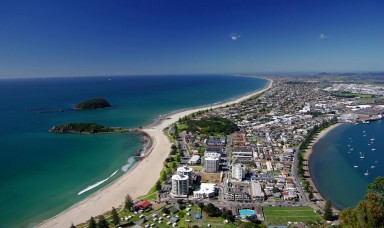 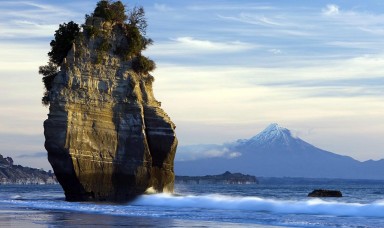 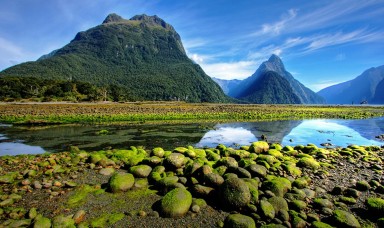 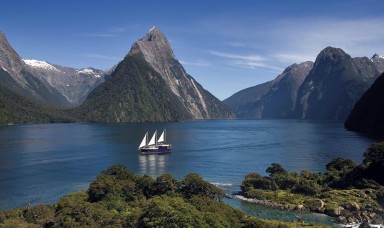 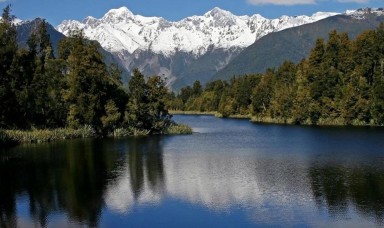 New Zealand (/njuːˈziːlənd/; Māori: Aotearoa ) is an island country in the southwestern Pacific Ocean. The country geographically comprises two main landmasses – that of the North Island, or Te Ika-a-Māui, and the South Island, or Te Waipounamu – and numerous smaller islands. New Zealand is situated some 1,500 kilometres (900 mi) east of Australia across the Tasman Sea and roughly 1,000 kilometres (600 mi) south of the Pacific island nations of New Caledonia, Fiji, and Tonga. Because of its remoteness, it was one of the last lands to be settled by humans. During its long isolation, New Zealand developed a distinctive biodiversity of animal, fungal and plant life; most notable are the large number of unique bird species. The country’s varied topography and its sharp mountain peaks owe much to the tectonic uplift of land and volcanic eruptions.

New Zealand is made up of two main islands and a number of smaller islands, located near the centre of the water hemisphere. The two main islands (the North Island, or Te Ika-a-Māui, and the South Island, or Te Waipounamu) are separated by the Cook Strait, 22 kilometres (14 mi) wide at its narrowest point. Besides the North and South Islands, the five largest inhabited islands are Stewart Island, the Chatham Islands, Great Barrier Island (in the Hauraki Gulf), d’Urville Island (in the Marlborough Sounds) and Waiheke Island (about 22 km (14 mi) from central Auckland). The country’s islands lie between latitudes 29° and 53°S, and longitudes 165° and 176°E.

New Zealand is long (over 1,600 kilometres (990 mi) along its north-north-east axis) and narrow (a maximum width of 400 kilometres (250 mi)), with approximately 15,000 km (9,300 mi) of coastline and a total land area of 268,000 square kilometres (103,500 sq mi) Because of its far-flung outlying islands and long coastline, the country has extensive marine resources. Its Exclusive Economic Zone, one of the largest in the world, covers more than 15 times its land area.

The South Island is the largest landmass of New Zealand, and is divided along its length by the Southern Alps. There are 18 peaks over 3,000 metres (9,800 ft), the highest of which is Aoraki / Mount Cook at 3,754 metres (12,316 ft). Fiordland’s steep mountains and deep fiords record the extensive ice age glaciation of this south-western corner of the South Island. The North Island is less mountainous but is marked by volcanism. The highly active Taupo Volcanic Zone has formed a large volcanic plateau, punctuated by the North Island’s highest mountain, Mount Ruapehu (2,797 metres (9,177 ft)). The plateau also hosts the country’s largest lake, Lake Taupo, nestled in the caldera of one of the world’s most active supervolcanoes.

The country owes its varied topography, and perhaps even its emergence above the waves, to the dynamic boundary it straddles between the Pacific and Indo-Australian Plates. New Zealand is part of Zealandia, a microcontinent nearly half the size of Australia that gradually submerged after breaking away from the Gondwanan supercontinent. About 25 million years ago, a shift in plate tectonic movements began to contort and crumple the region. This is now most evident in the Southern Alps, formed by compression of the crust beside the Alpine Fault. Elsewhere the plate boundary involves the subduction of one plate under the other, producing the Puysegur Trench to the south, the Hikurangi Trench east of the North Island, and the Kermadec and Tonga Trenches further north.

The population of New Zealand is approximately 4.5 million. New Zealand is a predominantly urban country, with 72 percent of the population living in 16 main urban areas and 53 percent living in the four largest cities of Auckland, Christchurch, Wellington, and Hamilton. New Zealand cities generally rank highly on international livability measures. For instance, in 2010 Auckland was ranked the world’s 4th most liveable city and Wellington the 12th by the Mercer Quality of Life Survey

The life expectancy of a New Zealand child born in 2008 was 82.4 years for females, and 78.4 years for males. Life expectancy at birth is forecast to increase from 80 years to 85 years in 2050 and infant mortality is expected to decline. New Zealand’s fertility rate of 2.1 is relatively high for a developed country, and natural births account for a significant proportion of population growth. Subsequently, the country has a young population compared to most industrialized nations, with 20 percent of New Zealanders being 14 years-old or younger. By 2050 the population is forecast to reach 5.3 million, the median age to rise from 36 years to 43 years and the percentage of people 60 years of age and older to rise from 18 percent to 29 percent.

New Zealand has a modern, prosperous and developed market economy with an estimated gross domestic product (GDP) at purchasing power parity (PPP) per capita of roughly US$28,250.7] The currency is the New Zealand dollar, informally known as the “Kiwi dollar”; it also circulates in the Cook Islands (see Cook Islands dollar), Niue, Tokelau, and the Pitcairn Islands. New Zealand was ranked sixth in the 2013 Human Development Index, fourth in the The Heritage Foundation’s 2012 Index of Economic Freedom, and 13th in INSEAD’s 2012 Global Innovation Index.

Historically, extractive industries have contributed strongly to New Zealand’s economy, focussing at different times on sealing, whaling, flax, gold, kauri gum, and native timber. With the development of refrigerated shipping in the 1880s meat and dairy products were exported to Britain, a trade which provided the basis for strong economic growth in New Zealand. High demand for agricultural products from the United Kingdom and the United States helped New Zealanders achieve higher living standards than both Australia and Western Europe in the 1950s and 1960s. In 1973 New Zealand’s export market was reduced when the United Kingdom joined the European Community and other compounding factors, such as the 1973 oil and 1979 energy crisis, led to a severe economic depression. Living standards in New Zealand fell behind those of Australia and Western Europe, and by 1982 New Zealand had the lowest per-capita income of all the developed nations surveyed by the World Bank. Since 1984, successive governments engaged in major macroeconomic restructuring (known first as Rogernomics and then Ruthanasia), rapidly transforming New Zealand from a highly protectionist economy to a liberalised free-trade economy.

Unemployment peaked above 10 percent in 1991 and 1992, following the 1987 share market crash, but eventually fell to a record low of 3.4 percent in 2007 (ranking fifth from twenty-seven comparable OECD nations). However, the global financial crisis that followed had a major impact on New Zealand, with the GDP shrinking for five consecutive quarters, the longest recession in over thirty years, and unemployment rising back to 7 percent in late 2009. As of May 2012, the general unemployment rate was around 6.7 percent, while the unemployment rate for youth aged 15 to 21 was 13.6 percent. New Zealand has experienced a series of “brain drains” since the 1970s that still continue today. Nearly one quarter of highly skilled workers live overseas, mostly in Australia and Britain, which is the largest proportion from any developed nation. In recent years, however, a “brain gain” has brought in educated professionals from Europe and lesser developed countries.

Early Māori adapted the tropically based east Polynesian culture in line with the challenges associated with a larger and more diverse environment, eventually developing their own distinctive culture. Social organisation was largely communal with families (whanau), sub-tribes (hapu) and tribes (iwi) ruled by a chief (rangatira) whose position was subject to the community’s approval. The British and Irish immigrants brought aspects of their own culture to New Zealand and also influenced Māori culture, particularly with the introduction of Christianity. However, Māori still regard their allegiance to tribal groups as a vital part of their identity, and Māori kinship roles resemble those of other Polynesian peoples. More recently American, Australian, Asian and other European cultures have exerted influence on New Zealand. Non-Māori Polynesian cultures are also apparent, with Pasifika, the world’s largest Polynesian festival, now an annual event in Auckland.

The largely rural life in early New Zealand led to the image of New Zealanders being rugged, industrious problem solvers. Modesty was expected and enforced through the “tall poppy syndrome”, where high achievers received harsh criticism. At the time New Zealand was not known as an intellectual country. From the early 20th century until the late 1960s Māori culture was suppressed by the attempted assimilation of Māori into British New Zealanders. In the 1960s, as higher education became more available and cities expanded urban culture began to dominate. Even though the majority of the population now lives in cities, much of New Zealand’s art, literature, film and humour has rural themes.