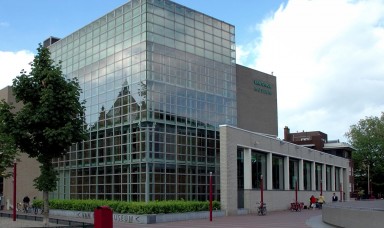 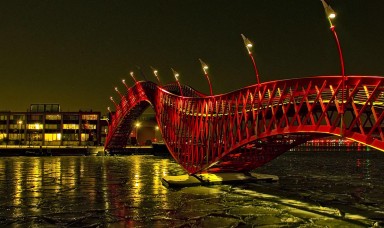 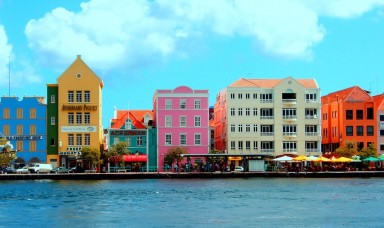 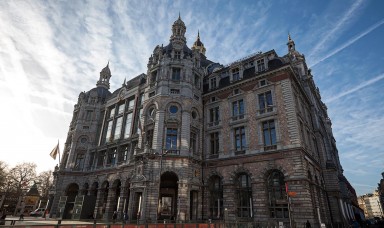 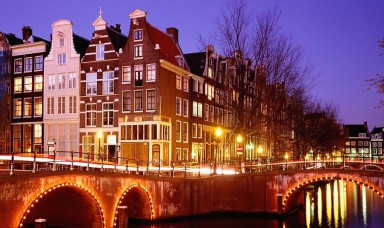 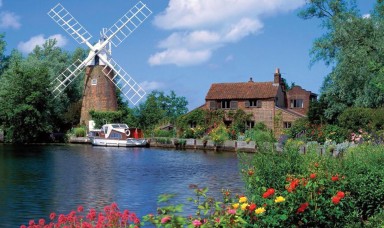 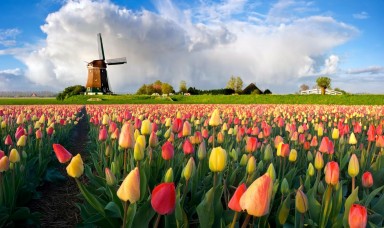 The Netherlands is a constituent country of the Kingdom of the Netherlands, consisting of twelve provinces in North-West Europe and three islands in the Caribbean. The European part of the Netherlands borders the North Sea to the north and west, Belgium to the south, and Germany to the east, and shares maritime borders with Belgium, Germany and the United Kingdom. It is a parliamentary democracy organised as a unitary state. The capital is Amsterdam and the seat of government is The Hague. The Netherlands in its entirety is often referred to as “Holland”, although North and South Holland are actually only two of its provinces.

The European area of the Netherlands lies between latitudes 50° and 54° N, and longitudes 3° and 8° E.

The country is divided into two main parts by three large rivers, the Rhine (Rijn) and its main distributaries, the Waal and the Meuse (Maas). These rivers functioned as a natural barrier between earlier fiefdoms and hence created traditionally a cultural divide, as is evident in some phonetic traits that are recognisable north and south of these “Large Rivers” (de Grote Rivieren).

The south-western part of the Netherlands is a river delta and two tributaries of the Scheldt (Westerschelde and Oosterschelde). There is only one significant branch of the Rhine, the IJssel river, discharging into the IJsselmeer, the former Zuiderzee (‘southern sea’). This river also forms a linguistic divide: people to the east of this river speak Dutch Low Saxon dialects (except for the province of Friesland, which has its own language).

The fertility rate in the Netherlands is 1.78 children per woman (2013 est), which is high compared with many other European countries, but below the rate of 2.1 children per woman required for natural population replacement. Life expectancy is high in the Netherlands: 83.21 years for newborn girls and 78.93 for boys (2013 est). The country has a migration rate of 1.99 migrants per 1,000 inhabitants per year.

Dutch people, or descendants of Dutch people, are also found in migrant communities worldwide, notably in Canada, Australia, Brazil, South Africa and the United States. According to the 2006 US Census, more than 5 million Americans claim total or partial Dutch ancestry. There are close to 3 million Dutch-descended Afrikaners living in South Africa. In 1940, there were 290,000 Europeans and Eurasians in Indonesia, but most have since left the country. According to Eurostat, in 2010 there were 1.8 million foreign-born residents in the Netherlands, corresponding to 11.1% of the total population. Of these, 1.4 million (8.5%) were born outside the EU and 0.428 million (2.6%) were born in another EU Member State.

The Netherlands is the 24th most densely populated country in the world, with 404.6 inhabitants per square kilometre (1,048 /sq mi)—or 497 inhabitants per square kilometre (1,287 /sq mi) if only the land area is counted. The Randstad is the country’s largest conurbation located in the west of the country and contains the four largest cities: Amsterdam in the province North Holland, Rotterdam and The Hague in the province South Holland, and Utrecht in the province Utrecht. The Randstad has a population of 7 million inhabitants and is the 6th largest metropolitan area in Europe.

The Netherlands is divided into twelve provinces, each under a Commissioner of the King (Commissaris van de Koning), except for Limburg province where the position is named Governor (Gouverneur). All provinces are divided into municipalities (gemeenten), of which there are 408.

The country is also subdivided in water districts, governed by a water board (waterschap or hoogheemraadschap), each having authority in matters concerning water management. As of January 2014 there will be 24, a reduction from the present 25. The creation of water boards actually pre-dates that of the nation itself, the first appearing in 1196. The Dutch water boards are among the oldest democratic entities in the world still in existence.

The administrative structure on the 3 BES islands, also known as the Caribbean Netherlands, is different. These islands have the status of openbare lichamen (public bodies) and are generally referred to as special municipalities. They are not part of a province.

The Netherlands has a developed economy and has been playing a special role in the European economy for many centuries. Since the 16th century, shipping, fishing, trade, and banking have been leading sectors of the Dutch economy. The Netherlands is one of the world’s 10 leading exporting countries. Foodstuffs form the largest industrial sector. Other major industries include chemicals, metallurgy, machinery, electrical goods, and tourism (in 2012 the Netherlands welcomed 11.7 million international tourists). Examples include Unilever, Heineken, financial services (ING), chemicals (DSM, AKZO), petroleum refining (Shell), electronical machinery (Philips, ASML), and car navigation (TomTom).

In Q3 and Q4 2011, the Dutch economy contracted by 0.4% and 0.7%, respectively, because of European Debt Crisis, while in Q4 the Eurozone economy shrunk by 0.3%. The Netherlands also has a relatively low GINI coefficient of 0.326. Despite ranking only 7th in GDP per capita, UNICEF ranked the Netherlands 1st in child well-being. On the Index of Economic Freedom Netherlands is the 13th most free market capitalist economy out of 157 surveyed countries.

Amsterdam is the financial and business capital of the Netherlands. The Amsterdam Stock Exchange (AEX), part of Euronext, is the world’s oldest stock exchange and is one of Europe’s largest bourses. It is situated near Dam Square in the city’s centre. As a founding member of the euro, the Netherlands replaced (for accounting purposes) its former currency, the “gulden” (guilder), on 1 January 1999, along with 15 other adopters of the euro. Actual euro coins and banknotes followed on 1 January 2002. One euro was equivalent to 2.20371 Dutch guilders. In the Caribbean Netherlands, the US dollar is used instead of the euro.

The Netherlands has had many well-known painters. The 17th century, in which the Dutch Republic was prosperous, was the age of the “Dutch Masters”, such as Rembrandt van Rijn, Johannes Vermeer, Jan Steen, Jacob van Ruysdael and many others. Famous Dutch painters of the 19th and 20th century were Vincent van Gogh and Piet Mondriaan. M. C. Escher is a well-known graphics artist. Willem de Kooning was born and trained in Rotterdam, although he is considered to have reached acclaim as an American artist.

The Netherlands is the country of philosophers Erasmus of Rotterdam and Spinoza. All of Descartes’ major work was done in the Netherlands. The Dutch scientist Christiaan Huygens (1629–1695) discovered Saturn’s moon Titan, argued that light travelled as waves, invented the pendulum clock and was the first physicist to use mathematical formulae. Antonie van Leeuwenhoek was the first to observe and describe single-celled organisms with a microscope.

In the Dutch Golden Age, literature flourished as well, with Joost van den Vondel and P. C. Hooft as the two most famous writers. In the 19th century, Multatuli wrote about the poor treatment of the natives in Dutch colonies. Important 20th century authors include Harry Mulisch, Jan Wolkers, Simon Vestdijk, Hella S. Haasse, Cees Nooteboom, Gerard (van het) Reve and Willem Frederik Hermans. Anne Frank’s Diary of a Young Girl was published after she died in the Holocaust and translated from Dutch to all major languages.

Replicas of Dutch buildings can be found in Huis Ten Bosch, Nagasaki, Japan. A similar Holland Village is being built in Shenyang, China. Windmills, tulips, wooden shoes, cheese, Delftware pottery, and cannabis are among the items associated with the Netherlands by tourists.

The Netherlands has a long history of social tolerance and today is regarded as a liberal country, considering its drug policy and its legalisation of euthanasia. On 1 April 2001, the Netherlands became the first nation to recognise same-sex marriage.