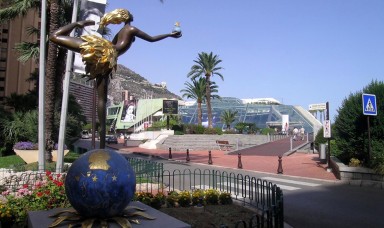 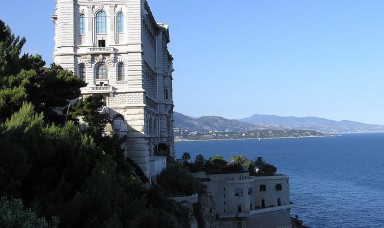 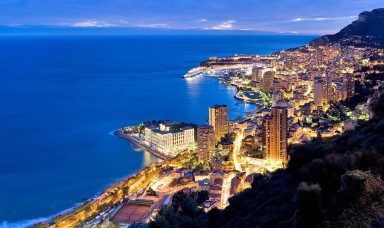 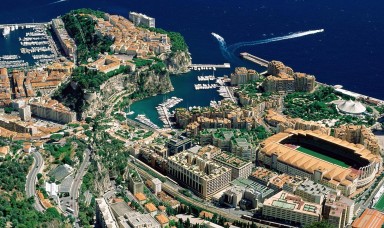 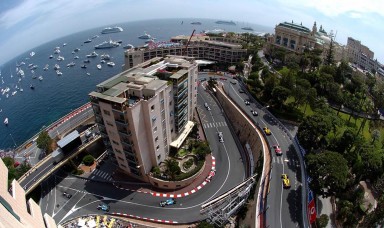 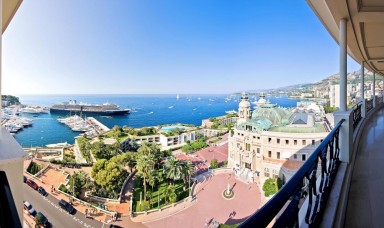 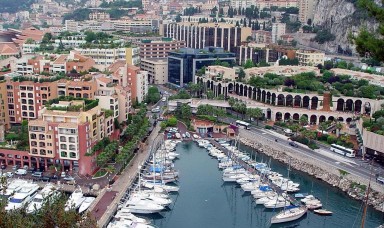 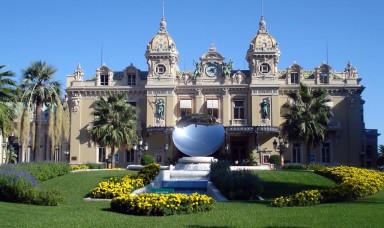 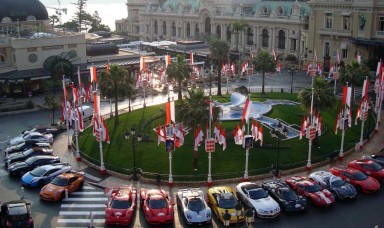 Monaco /ˈmɒnəkoʊ/, officially the Principality of Monaco (French: Principauté de Monaco (French pronunciation: ​ə) mɔnaˈko]); Monégasque: Principatu de Múnegu; Italian: Principato di Monaco; Occitan: Principat de Mónegue), is a sovereign city-state, located on the French Riviera in Western Europe. It is bordered by France on three sides; one side borders the Mediterranean Sea. It has an area of 2.02 km2 (0.78 sq mi), and a population of 36,371, making Monaco the second smallest, and the most densely populated, country in the world. Monaco has a land border of only 4.4 km (2.7 mi), a coastline of 4.1 km (2.5 mi), and a width that varies between 1,700 and 349 m (5,600 and 1,145 ft). The highest point in the country is a narrow pathway named Chemin des Révoires on the slopes of Mont Agel, in the Les Révoires district, which is 161 metres (528 feet) above sea level. Monaco’s most populous Quartier is Monte Carlo, and the most populous Ward is Larvotto/Bas Moulins. Monaco is known for its land reclamation, which has increased its size by an estimated 20%.

The highest point in the country is a narrow pathway named Chemin des Révoires on the slopes of Mont Agel, in the Les Révoires district, 161 metres (528 feet) above sea level. The lowest point in the country is the Mediterranean Sea, at sea level. Saint-Jean is the longest flowing body of water, around 0.19 km (0.12 miles) in length, and Fontvieille is the largest lake, approximately 0.5 ha (1.24 acres) in size. Monaco’s most populated Quartier is Monte Carlo, and the most populated Ward is Larvotto/Bas Moulins. After a recent expansion of Port Hercules, Monaco’s total area grew to 2.02 km2 (0.78 sq mi) or 202 hectares (500 acres), consequently, new plans have been approved to extend the district of Fontvieille by 0.08 km2 (0.031 sq mi) or 8 hectares (20 acres), with land reclaimed from the Mediterranean Sea. Current land reclamation projects include, extending the district of Fontvieille by . There are two ports in Monaco, Hercules and Fontvieille, as well as the neighboring French port of Cap d’Ail. Monaco’s only natural resource is fishing; with almost the entire country being an urban area, Monaco lacks any sort of commercial agriculture industry.

Naturalized citizens of Monaco are called Monacans, while Monegasque is the proper term for describing someone who was born in Monaco. Monaco has the world’s highest life expectancy at nearly 90 years.

Monaco is the second smallest country (by size) in the world; only Vatican City is smaller. Monaco is also the world’s second smallest monarchy, and is the most densely populated country in the world. The state consists of only one municipality (commune). There is no geographical distinction between the State and City of Monaco, although responsibilities of the government (state-level) and of the municipality (city-level) are different. According to the constitution of 1911, the principality was subdivided into three municipalities:

The municipalities were merged into one in 1917, after accusations that the government was acting according to the motto “divide and conquer,” and they were accorded the status of Wards or Quartiers thereafter.

An additional ward was planned by new land reclamation to be settled beginning in 2014; but Prince Albert II announced in his 2009 New Year Speech that he had ended plans due to the current economic climate. However, Prince Albert II in mid-2010 firmly restarted the program.

Monaco boasts the world’s highest GDP nominal per capita at US$153,177, GDP PPP per capita at $132,571, and GNI per capita at $183,150. It also has the lowest unemployment rate at 0%, with over 48,000 workers who commute from France and Italy each day. According to the CIA World Factbook, Monaco has the world’s lowest poverty rate, and the highest number of millionaires and billionaires per capita in the world. For the fourth year in a row, Monaco in 2012 had the world’s most expensive real estate market, at $58,300 per square metre.

One of Monaco’s main sources of income is tourism. Each year many foreigners are attracted to its casino (which citizens are prohibited from) and pleasant climate. It has also become a major banking center, holding over €100 billion worth of funds, The principality has successfully sought to diversify its economic base into services and small, high-value-added, non-polluting industries, such as cosmetics and biothermics.

The state retains monopolies in numerous sectors, including tobacco and the postal service. The telephone network (Monaco Telecom) used to be fully owned by the state; it now owns only 45%, while the remaining 55% is owned by both Cable & Wireless Communications (49%) and Compagnie Monégasque de Banque (6%). It is still, however, a monopoly. Living standards are high, roughly comparable to those in prosperous French metropolitan areas.

Monaco is not a member of the European Union. However, it is very closely linked via a customs union with France, and as such, its currency is the same as that of France, the euro. Before 2002, Monaco minted its own coins, the Monegasque franc. Monaco has acquired the right to mint euro coins with Monegasque designs on its national side.