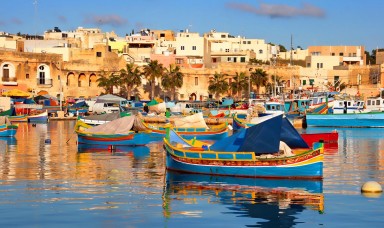 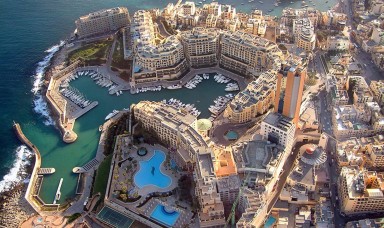 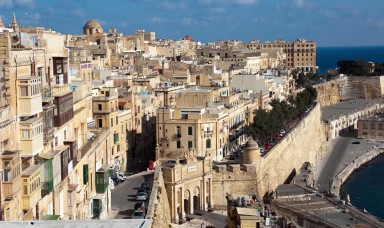 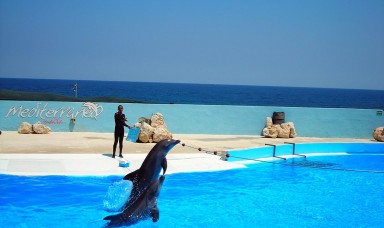 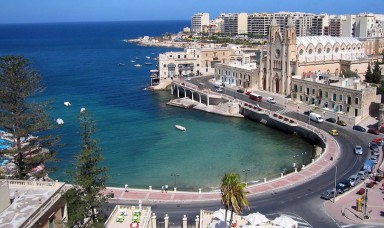 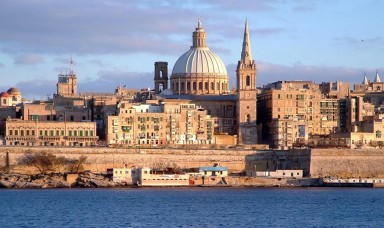 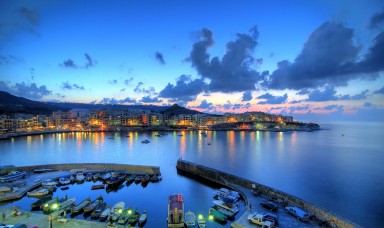 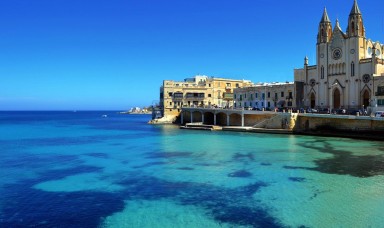 Malta is a southern European country in the Mediterranean Sea. It lies 80 km (50 mi) south of Sicily, 284 km (176 mi) east of Tunisia and 333 km (207 mi) north of Libya. The country covers just over 316 km2 (122 sq mi), making it one of the world’s smallest and most densely populated countries. The capital of Malta is Valletta which is also the smallest capital in the EU at 0.8 km2. Malta has two official languages: Maltese and English.

Malta is an archipelago in the central Mediterranean (in its eastern basin), some 80 km (50 mi) south of the Italian island of Sicily across the Malta Channel. Only the three largest islands – Malta (Malta), Gozo (Għawdex) and Comino (Kemmuna) – are inhabited. The smaller islands (see below) are uninhabited. The islands of the archipelago lie on the Malta plateau, a shallow shelf formed from the high points of a land bridge between Sicily and North Africa that became isolated as sea levels rose after the last Ice Age. The archipelago is therefore situated in the zone between the Eurasian and African tectonic plates.

Numerous bays along the indented coastline of the islands provide good harbours. The landscape consists of low hills with terraced fields. The highest point in Malta is Ta’ Dmejrek, at 253 m (830 ft), near Dingli. Although there are some small rivers at times of high rainfall, there are no permanent rivers or lakes on Malta. However, some watercourses have fresh water running all year round at Baħrija, l-Imtaħleb and San Martin, and at Lunzjata Valley in Gozo.

Native Maltese people make up the majority of the island. However there are minorities, the largest of which are British people, many of whom retired to Malta. The population of Malta as of July 2011 was estimated at 408,000. As of 2005, 17% were aged 14 and under, 68% were within the 15–64 age bracket whilst the remaining 13% were 65 years and over. Malta’s population density of 1,282 per square km (3,322/sq mi) is by far the highest in the EU, and one of the highest in the world. The only census year showing a fall in population was that of 1967, with a 1.7% total decrease, attributable to a substantial number of Maltese residents who emigrated.

The population’s age composition is similar to the age structure prevalent in the EU. Since 1967 there was observed a trend indicating an ageing population, and is expected to continue in the foreseeable future. Malta’s old-age-dependency-ratio rose from 17.2% in 1995 to 19.8% in 2005, reasonably lower than the EU’s 24.9% average; 31.5% of the Maltese population is aged under 25 (compared to the EU’s 29.1%); but the 50–64 age group constitutes 20.3% of the population, significantly higher than the EU’s 17.9%. Malta’s old-age-dependency-ratio is expected to continue rising steadily in the coming years.

Maltese legislation recognises both civil and canonical (ecclesiastical) marriages. Annulments by the ecclesiastical and civil courts are unrelated and are not necessarily mutually endorsed. Malta voted in favour of divorce legislation in a referendum held on 28 May 2011. Abortion in Malta is illegal. A person must be 16 to marry. The number of brides aged under 25 decreased from 1471 in 1997 to 766 in 2005; while the number of grooms under 25 decreased from 823 to 311. There is a constant trend that females are more likely than males to marry young. In 2005 there were 51 brides aged between 16 and 19, compared to 8 grooms.

Malta has had a system of local government since 1993, based on the European Charter of Local Self-Government. There are at present 68 local councils (54 in Malta and 14 in Gozo). Sixteen “hamlets”, which form part of larger councils, have their own Administrative Committee. There are no intermediate levels between local government and national government and the levels of the six districts (five on the main island) and of the three regions (Gozo, Malta Majjistral, and Malta Xlokk) serve primarily statistical purposes.

Each council is made up of a number of councillors (from five to 13, depending on and relative to the population they represent). A mayor and a deputy mayor are elected by and from the councillors. The executive secretary, who is appointed by the council, is the executive, administrative and financial head of the council. Councillors are elected every four years through the single transferable vote. People who are eligible to vote in the election of the Maltese House of Representatives as well as resident citizens of the EU are eligible to vote. Due to the recent reform of the system, no elections will be held before 2012 from when elections will be held every two years for an alternating half of the councils.

Local councils are responsible for the general upkeep and embellishment of the locality (including repairs to non-arterial roads), allocation of local wardens and refuse collection; they also carry out general administrative duties for the central government such as collection of government rents and funds and answer government-related public inquiries.

Malta is classified as an advanced economy together with 32 other countries according to the International Monetary Fund (IMF). Until 1800 Malta depended on cotton, tobacco and its shipyards for exports. Once under British control, they came to depend on Malta Dockyard for support of the Royal Navy, especially during the Crimean War of 1854. The military base benefited craftsmen and all those who served the military.

In 1869, the opening of the Suez Canal gave Malta’s economy a great boost, as there was a massive increase in the shipping which entered the port. Ships stopping at Malta’s docks for refuelling helped the Entrepôt trade, which brought additional benefits to the island.

However, towards the end of the 19th century the economy began declining, and by the 1940s Malta’s economy was in serious crisis. One factor was the longer range of newer merchant ships that required less frequent refuelling stops.

Currently, Malta’s major resources are limestone, a favourable geographic location and a productive labour force. Malta produces only about 20% of its food needs, has limited freshwater supplies and has no domestic energy sources. The economy is dependent on foreign trade (serving as a freight trans-shipment point), manufacturing (especially electronics and textiles) and tourism.

Film production is a growing contributor to the Maltese economy. Despite its size, Malta continues to attract international film productions from around the world and this is the best sign of confidence that a small country can get from foreign producers. For over 88 years the Maltese islands have hosted some of the most renowned film makers in the world. Since 1925 when the first film was shot in Malta (Sons of the Sea), Malta has welcomed over 100 feature films entirely or partially. Malta has captured the imagination of some of the world’s top producers portraying Malta as a double for a myriad of locations and spanning from the modern times to ancient civilisations of Greece, Rome and Egypt to the 1960s. The financial incentives introduced by the Maltese government in 2005 help to draw significant traffic despite stiff competition. The current financial incentives to foreign productions currently stand at 23% with an additional 2% if Malta stands in as Malta; meaning a production can get up to 25% back on their eligible spending incurred in Malta.

In preparation for Malta’s membership in the European Union, which it joined on 1 May 2004, it privatised some state-controlled firms and liberalised markets. For example, the government announced on 8 January 2007 that it was selling its 40% stake in MaltaPost, to complete a privatisation process which has been ongoing for the past five years. In 2010, Malta has managed to privatise telecommunications, postal services, shipyards and shipbuilding.

Malta has taken important and substantial steps to establish itself as a global player in the cross-border fund administration business. Competing against countries like Ireland and Luxembourg, Malta has a unique combination of a multi-lingual workforce and a strong legal system. Malta has a mixed reputation for transparency and a DAW Index score of 6, although both are expected to improve as Malta increasingly adopts more comprehensive legislative framework for financial services. Malta has a regulator, the MFSA, with a strong business development mindset, and the country has been successful in attracting gaming businesses, aircraft and ship registration, credit-card issuing banking licences and also fund administration. Service providers to these industries, including fiduciary and trustee business, are a core part of the growth strategy of the Island. Malta has made strong headway in implementing EU Financial Services Directives including UCITs IV and soon AIFMD. As a base for alternative asset managers who must comply with new directives, Malta has attracted a number of key players including IDS, Iconic Funds, Apex Fund Services and TMF/Customs House.

Malta and Tunisia are currently discussing the commercial exploitation of the continental shelf between their countries, particularly for petroleum exploration. These discussions are also undergoing between Malta and Libya for similar arrangements.

The culture of Malta reflects the various cultures that have come into contact with the Maltese Islands throughout the centuries, including neighbouring Mediterranean cultures, and the cultures of the nations that ruled Malta for long periods of time prior to its independence in 1964.