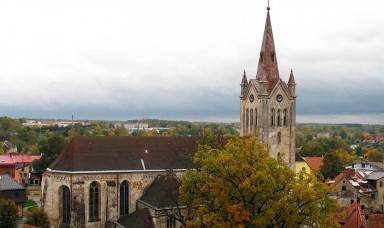 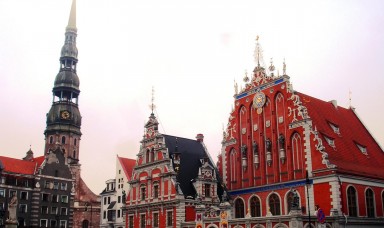 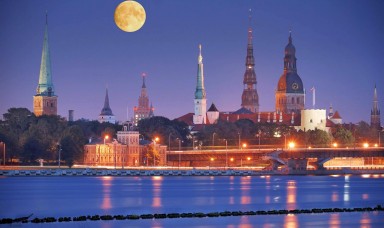 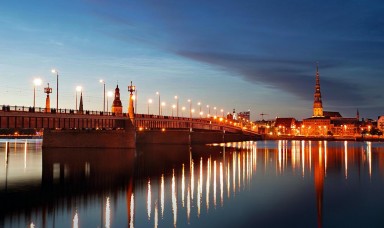 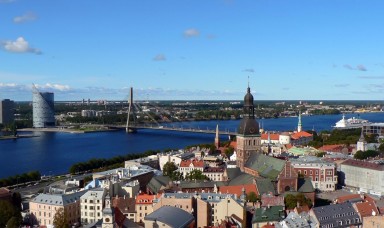 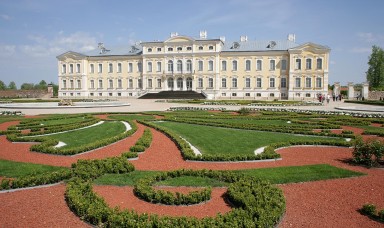 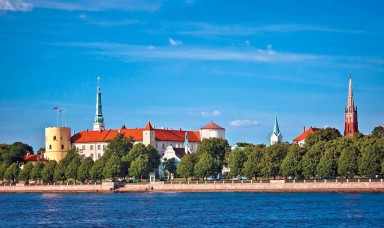 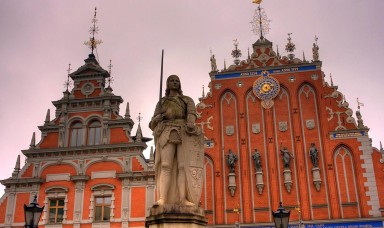 Latvia officially the Republic of Latvia (Latvian: Latvijas Republika), is a country in the Baltic region of Northern Europe. It is bordered to the north by Estonia, to the south by Lithuania, to the east by Russia, and to the southeast by Belarus and by a maritime border to the west with Sweden. With 2,070,371 inhabitants and a territory of 64,589 km2 (24,938 sq mi) it is one of the least populous and least densely populated countries of the European Union. The capital of Latvia is Riga. The official language is Latvian. The country has a temperate seasonal climate. Latvia is a unitary parliamentary republic, divided into 118 administrative divisions of which 109 are municipalities and 9 are cities. There are five planning regions: Courland, Latgale, Riga, Vidzeme and Zemgale.

The 100-seat unicameral Latvian parliament, the Saeima, is elected by direct popular vote every four years. The president is elected by the Saeima in a separate election, also held every four years. The president appoints a prime minister who, together with his cabinet, forms the executive branch of the government, which has to receive a confidence vote by the Saeima. This system also existed before World War II. Highest civil servants are sixteen Secretaries of State.

Latvia is a member of the World Trade Organisation (1999) and the European Union (2004). On the 1st of January 2014, it will introduce Euro as the country’s currency. According to current statistics, only 22% of the population support introduction of euro, while 53% oppose introduction of euro in 2014.

Since the year 2000, Latvia has had one of the highest (GDP) growth rates in Europe. However, the chiefly consumption-driven growth in Latvia resulted in the collapse of the Latvian GDP in late 2008 and early 2009, exacerbated by the global economic crisis and shortage of credit. Latvian economy fell 18% in the first three months of 2009, the biggest fall in the European Union.

Currently, Latvia is the third poorest state in the European Union by GDP per capita (PPP). According to Eurostat, 36.6% of population are at risk of poverty or social exclusion.

The economic crisis of 2009 proved earlier assumptions that the fast growing economy was heading for implosion of the economic bubble, because it was driven mainly by growth of domestic consumption, financed by a serious increase of private debt, as well as a negative foreign trade balance. The prices of real estate, which were at some points appreciating at approximately 5% a month, were long perceived to be too high for the economy, which mainly produces low-value goods and raw materials.

Privatisation in Latvia is almost complete. Virtually all of the previously state-owned small and medium companies have been privatised, leaving only a small number of politically sensitive large state companies. The private sector accounted for nearly 68% of the country’s GDP in 2000.

Foreign investment in Latvia is still modest compared with the levels in north-central Europe. A law expanding the scope for selling land, including to foreigners, was passed in 1997. Representing 10.2% of Latvia’s total foreign direct investment, American companies invested $127 million in 1999. In the same year, the United States of America exported $58.2 million of goods and services to Latvia and imported $87.9 million. Eager to join Western economic institutions like the World Trade Organisation, OECD, and the European Union, Latvia signed a Europe Agreement with the EU in 1995—with a 4-year transition period. Latvia and the United States have signed treaties on investment, trade, and intellectual property protection and avoidance of double taxation.

Traditional Latvian folklore, especially the dance of the folk songs, date back well over a thousand years. More than 1.2 million texts and 30,000 melodies of folk songs have been identified.

Between the 13th and 19th century, Baltic Germans, many of whom were originally of non-German ancestry but had been assimilated into German culture, formed the upper class. They developed distinct cultural heritage, characterised by both Latvian and German influences. It has survived in German Baltic families to this day, in spite of their dispersal to Germany, the USA, Canada and other countries in the early 20th century. However, most indigenous Latvians did not participate in this particular cultural life. Thus, the mostly peasant local pagan heritage was preserved, partly merging with Christian traditions. For example, one of the most popular celebrations is Jāņi, a pagan celebration of the summer solstice—which Latvians celebrate on the feast day of St. John the Baptist.

In the 19th century, Latvian nationalist movements emerged. They promoted Latvian culture and encouraged Latvians to take part in cultural activities. The 19th century and beginning of the 20th century is often regarded as a classical era of Latvian culture. Posters show the influence of other European cultures, for example, works of artists such as the Baltic-German artist Bernhard Borchert and the French Raoul Dufy. With the onset of World War II, many Latvian artists and other members of the cultural elite fled the country yet continued to produce their work, largely for a Latvian émigré audience.

Latvian Song and Dance Festival is an important event in Latvian culture and social life. It has been held since 1873, normally every five years. Approximately 30,000 performers altogether participate in the event. Although usually folksongs and classical choir songs are sung, with emphasis on a cappella singing, recently modern popular songs have been incorporated into the repertoire as well.

After incorporation into the Soviet Union, Latvian artists and writers were forced to follow the Socialist realism style of art. During the Soviet era, music became increasingly popular, with the most popular being songs from the 1980s. At this time, songs often made fun of the characteristics of Soviet life and were concerned about preserving Latvian identity. This aroused popular protests against the USSR and also gave rise to an increasing popularity of poetry. Since independence, theatre, scenography, choir music, and classical music have become the most notable branches of Latvian culture.

During July 2014, Riga will host the 8th World Choir Games as it plays host to over 15 000 choristers representing over 300 choirs and over 60 countries. The festival is the biggest of its kind in the world and is held every two years in a different host city.