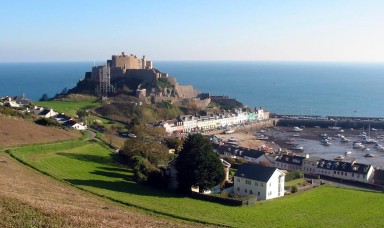 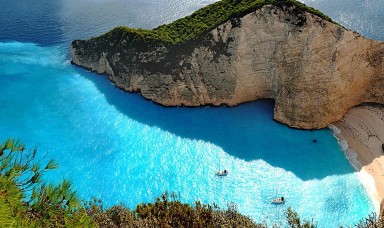 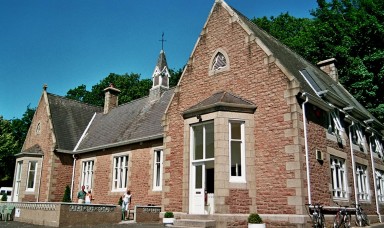 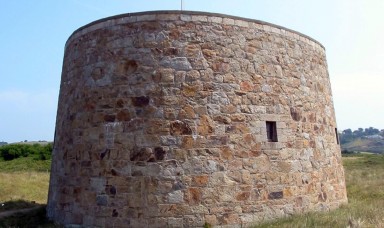 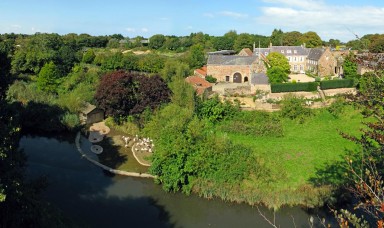 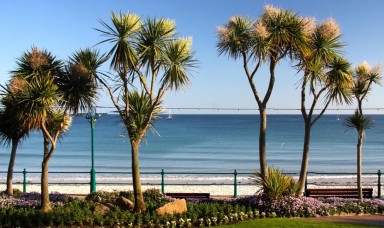 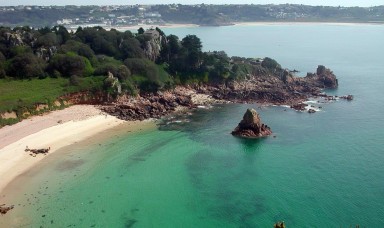 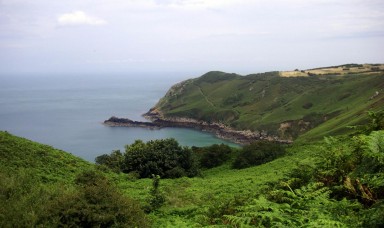 The climate is temperate with mild winters and cool summers.

The Atlantic Ocean has a moderating effect on temperature in Jersey, as water has a much greater specific heat capacity than air and tends to heat and cool slowly throughout the year. This has a warming influence on coastal areas in winter and a cooling influence in summer. The highest temperature recorded was 36.0 °C (96.8 °F) on 9 August 2003, and the lowest temperature recorded was −10.3 °C (13.5 °F) on 5 January 1894. By comparison, higher temperatures are found in mainland United Kingdom, which achieved 38.5 °C (101.3 °F) in Faversham, Kent on 10 August 2003. The impact of the Atlantic Ocean and costal winds ensure that Jersey is cooler than the UK during the summer months. Snow falls rarely in Jersey, some years will pass with no snow fall at all.

The terrain consists of a plateau sloping from long sandy bays in the south to rugged cliffs in the north. The plateau is cut by valleys running generally north-south.

Censuses have been undertaken in Jersey since 1821. In the 2011 census, the total resident population was estimated to be 97,857, of whom 34% live in Saint Helier, the island’s only town. Only half the island’s population was born in Jersey; 31% of the population were born elsewhere in the British Isles, 7% in continental Portugal or Madeira, 8% in other European countries and 4% elsewhere.

The people of Jersey are often called Islanders or, in individual terms, Jerseyman or Jerseywoman. Some Jersey-born people identify as British and value the special relationship between the British Crown and the island.

Jersey’s unicameral legislature is the Assembly of the States of Jersey. It includes fifty-one elected members: ten senators (elected on an island-wide basis), twelve Connétables (often called ‘constables’, heads of parishes) and twenty-nine deputies (representing constituencies), all elected for four-year terms as from the October 2011 elections. There are also five non-voting members appointed by the Crown: the Bailiff, the Lieutenant Governor of Jersey, the Dean of Jersey, the Attorney General and Solicitor General. Jersey has one of the lowest voter turn outs internationally, in 2005 with just 33% of the electorate voting – putting it well below the 77% European average for that year

The government is a Council of Ministers, consisting of a Chief Minister and nine ministers. Each minister may appoint up to two assistant ministers. A Chief Executive is head of the civil service. Some government functions are carried out in the island’s twelve parishes.

The Bailiff is President (presiding officer) of the States Assembly, head of the judiciary and as civic head of the island carries out various ceremonial roles.

As one of the Crown dependencies, Jersey is autonomous and self-governing, with its own independent legal, administrative and fiscal systems. In 1973, the Royal Commission on the Constitution set out the duties of the Crown as including: ultimate responsibility for the ‘good government’ of the Crown dependencies; ratification of island legislation by Order in Council (Royal Assent); international representation, subject to consultation with the island authorities before concluding any agreement which would apply to them; ensuring the islands meet their international obligations; and defence.

Queen Elizabeth II’s traditional title as Head of State is Duke of Normandy. “The Crown” is defined by the Law Officers of the Crown as the “Crown in right of Jersey”. The Queen’s representative and adviser in the island is the Lieutenant Governor of Jersey. He is a point of contact between Jersey ministers and the United Kingdom government and carries out executive functions in relation to immigration control, deportation, naturalisation and the issue of passports. Since September 2011, the incumbent Lieutenant Governor has been General Sir John McColl.

Thanks to specialisation in a few high-return sectors, at purchasing power parity Jersey has high economic output per capita, substantially ahead of all of the world’s large developed economies. Gross national income in 2009 was £3.7 billion (approximately £40,000 per head of population). However, this is not indicative of each individual resident’s purchasing power, and the actual standard of living in Jersey is comparable to that in the United Kingdom outside central London. The island is recognised as one of the leading offshore financial centres. The growth of this sector however has not been without its controversies as Jersey has been characterised by critics and detractors as a place in which the “leadership has essentially been captured by global finance, and whose members will threaten and intimidate anyone who dissents.” In June 2005 the States introduced the Competition (Jersey) Law 2005 to regulate competition and stimulate economic growth. This competition law was based on that of other jurisdictions.

Tourism supports not only hotels, but also retail and services: in 2009 there were 685,200 visitors spending £230 million. Duty-free goods are available for purchase on travel to and from the island.

In 2009 57% of the Island’s area was agricultural land (an increase on 2008). Major agricultural products are potatoes and dairy produce; agriculture’s share of GVA increased 5% in 2009, a fifth successive year of growth. Jersey cattle are a small breed of cow widely known for its rich milk and cream; although the quality of its meat is also appreciated on a small scale. The herd total in 2009 was 5,090 animals. Fisheries and aquaculture make use of Jersey’s marine resources to a total value of over £6 million in 2009.

Farmers and growers often sell surplus food and flowers in boxes on the roadside, relying on the honesty of customers to drop the correct change into the money box and take what they want. In the 21st century, diversification of agriculture and amendments in planning strategy have led to farm shops replacing many of the roadside stalls.

53,460 people were employed in Jersey as of December 2010: 24% in financial and legal services; 16% in wholesale and retail trades; 16% in the public sector; 10% in education, health and other private sector services; 10% in construction and quarrying; 9% in hotels, restaurants and bars.

Jersey along with Guernsey has its own lottery called The Channel Islands Lottery that was launched in 1975.

Until the 19th century, indigenous Jèrriais – a variety of Norman – was the language of the island, though French was used for official business. During the 20th century an intense language shift took place and Jersey today is predominantly English-speaking. Jèrriais nonetheless survives; around 2,600 islanders (three percent) are reckoned to be habitual speakers, and some 10,000 (12 percent) in all claim some knowledge of the language, particularly amongst the elderly in rural parishes. There have been efforts to revive Jèrriais in schools, and the highest number of declared Jèrriais speakers is in the capital.

The dialects of Jèrriais differ in phonology and, to a lesser extent, lexis between parishes, with the most marked differences to be heard between those of the west and east. Many place names are in Jèrriais, and French and English place names are also to be found. Anglicisation of the toponymy increased apace with the migration of English people to the island.

Some Neolithic carvings are the earliest works of artistic character to be found in Jersey. Only fragmentary wall-paintings remain from the rich mediaeval artistic heritage, after the wholesale iconoclasm of the Calvinist Reformation of the 16th century.