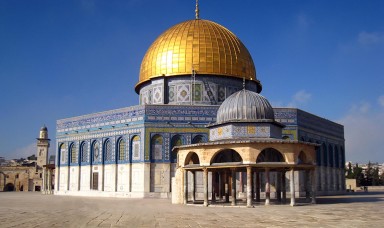 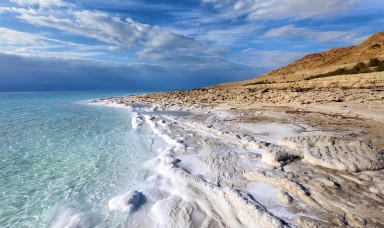 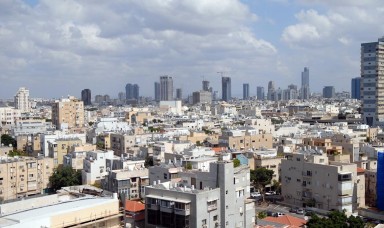 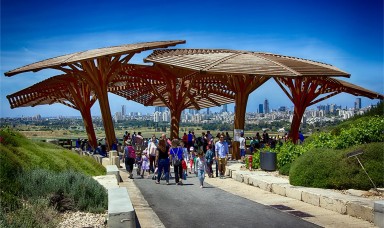 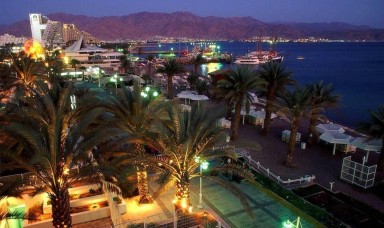 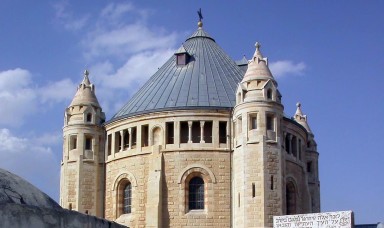 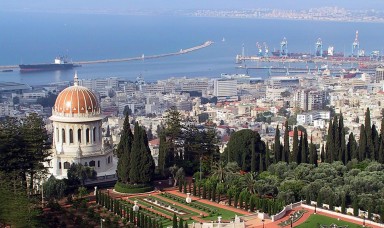 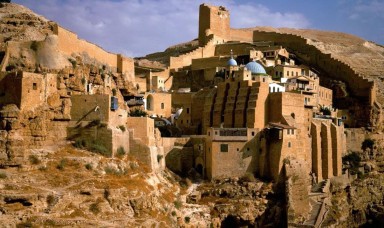 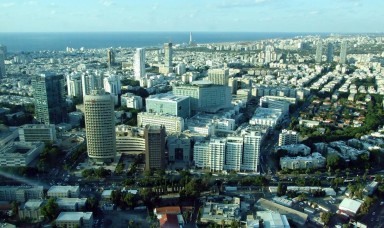 Israel /ˈɪzreɪəl/, officially the State of Israel (Hebrew: מְדִינַת יִשְׂרָאֵל‎, Medīnat Yisrā’el), is a country in Western Asia, on the south-eastern shore of the Mediterranean Sea. It shares land borders with Lebanon in the north, Syria in the northeast, Jordan and Palestine in the east, Egypt and the Gaza Strip on the southwest, and the Gulf of Aqaba in the Red Sea to the south, and it contains geographically diverse features within its relatively small area. In its Basic Laws Israel defines itself as a Jewish and Democratic State; it is the world’s only Jewish-majority state.

Israel is at the eastern end of the Mediterranean Sea, bounded by Lebanon to the north, Syria to the northeast, Jordan and the West Bank to the east, and Egypt and the Gaza strip to the southwest. It lies between latitudes 29° and 34° N, and longitudes 34° and 36° E.

The sovereign territory of Israel, excluding all territories captured by Israel during the 1967 Six-Day War, is approximately 20,770 square kilometers (8,019 sq mi) in area, of which two percent is water. However Israel is so narrow that the exclusive economic zone in the Mediterranean is double the land area of the country. The total area under Israeli law, including East Jerusalem and the Golan Heights, is 22,072 square kilometers (8,522 sq mi), and the total area under Israeli control, including the military-controlled and partially Palestinian-governed territory of the West Bank, is 27,799 square kilometers (10,733 sq mi). Despite its small size, Israel is home to a variety of geographic features, from the Negev desert in the south to the inland fertile Jezreel Valley, mountain ranges of the Galilee, Carmel and toward the Golan in the north. The Israeli Coastal Plain on the shores of the Mediterranean is home to 57 percent of the nation’s population. East of the central highlands lies the Jordan Rift Valley, which forms a small part of the 6,500-kilometer (4,039 mi) Great Rift Valley.

The Jordan River runs along the Jordan Rift Valley, from Mount Hermon through the Hulah Valley and the Sea of Galilee to the Dead Sea, the lowest point on the surface of the Earth. Further south is the Arabah, ending with the Gulf of Eilat, part of the Red Sea. Unique to Israel and the Sinai Peninsula are makhteshim, or erosion cirques. The largest makhtesh in the world is Ramon Crater in the Negev, which measures 40 by 8 kilometers (25 by 5 mi). A report on the environmental status of the Mediterranean basin states that Israel has the largest number of plant species per square meter of all the countries in the basin.

Temperatures in Israel vary widely, especially during the winter. The more mountainous regions can be windy, cold, and sometimes snowy; Jerusalem usually receives at least one snowfall each year. Meanwhile, coastal cities, such as Tel Aviv and Haifa, have a typical Mediterranean climate with cool, rainy winters and long, hot summers. The area of Beersheba and the Northern Negev has a semi-arid climate with hot summers, cool winters and fewer rainy days than the Mediterranean climate. The Southern Negev and the Arava areas have desert climate with very hot and dry summers, and mild winters with few days of rain. The highest temperature in the continent of Asia (53.7 °C or 128.7 °F) was recorded in 1942 at Tirat Zvi kibbutz in the northern Jordan river valley.

From May to September, rain in Israel is rare. With scarce water resources, Israel has developed various water-saving technologies, including drip irrigation. Israelis also take advantage of the considerable sunlight available for solar energy, making Israel the leading nation in solar energy use per capita (practically every house uses solar panels for water heating).

Four different phytogeographic regions exist in Israel, due to the country’s location between the temperate and the tropical zones, bordering the Mediterranean Sea in the west and the desert in the east. For this reason the flora and fauna of Israel is extremely diverse. There are 2,867 known species of plants found in Israel. Of these, at least 253 species are introduced and non-native. There are 380 Israeli nature reserves.

In mid-2013, Israel’s population was an estimated 8,051,200 people, of whom 6,045,900 are Jews. Arab citizens of Israel comprise 20.7% of the country’s total population. Over the last decade, large numbers of migrant workers from Romania, Thailand, China, Africa and South America have settled in Israel. Exact figures are unknown, as many of them are living in the country illegally, but estimates run in the region of 203,000. By June 2012, approximately 60,000 African migrants had entered Israel. About 92% of Israelis live in urban areas.

Retention of Israel’s population since 1948 is about even or greater, when compared to other countries with mass immigration. Emigration from Israel (yerida) to other countries, primarily the United States and Canada, is described by demographers as modest, but is often cited by Israeli government ministries as a major threat to Israel’s future.

In 2009, over 300,000 Israeli citizens lived in West Bank settlements such as Ma’ale Adumim and Ariel, and communities that predated the establishment of the State but were re-established after the Six-Day War, in cities such as Hebron and Gush Etzion. 20,000 Israelis live in Golan Heights settlements. In 2011, there were 250,000 Jews living in East Jerusalem. The total number of Israeli settlers is over 500,000 (6.5% of the Israeli population). Approximately 7,800 Israelis lived in settlements in the Gaza Strip, until they were evacuated by the government as part of its 2005 disengagement plan.

Israel was established as a homeland for the Jewish people and is often referred to as a Jewish state. The country’s Law of Return grants all Jews and those of Jewish lineage the right to Israeli citizenship. Over three quarters, or 75.5%, of the population are Jews from a diversity of Jewish backgrounds. Around 4% of Israelis (300,000), ethnically defined as “others”, are Russian-descendants of Jewish origin or family who are not Jewish according to rabbinical law, but were eligible for Israeli citizenship under the Law of Return. Approximately 73% of Israeli Jews are Israeli-born, 18.4% are immigrants from Europe and the Americas, and 8.6% are immigrants from Asia and Africa (including the Arab World). Jews from Europe and the former Soviet Union and their Israeli-born descendants, or Ashkenazi Jews, constitute approximately 50% of Jewish Israelis. Jews who left or fled Arab and Muslim countries and their descendants, known as Mizrahi and Sephardi Jews, form most of the rest of the Jewish population. Jewish intermarriage rates run at over 35% and recent studies suggest that the percentage of Israelis descended from both Sephardi and Ashkenazi Jews increases by 0.5 percent every year, with over 25% of school children now originating from both communities.

The State of Israel is divided into six main administrative districts, known as mehozot (מחוזות; singular: mahoz) – Center, Haifa, Jerusalem, North, Southern, and Tel Aviv Districts, as well as the Judea and Samaria Area in the West Bank. All of the Judea and Samaria Area and parts of the Jerusalem and North districts are not recognized internationally as part of Israel. Districts are further divided into fifteen sub-districts known as nafot (נפות; singular: nafa), which are themselves partitioned into fifty natural regions.

Israel is considered one of the most advanced countries in Southwest Asia in economic and industrial development. In 2010, it joined the OECD. The country is ranked 3rd in the region and 38th worldwide on the World Bank’s Ease of Doing Business Index as well as in the World Economic Forum’s Global Competitiveness Report. It has the second-largest number of startup companies in the world (after the United States) and the largest number of NASDAQ-listed companies outside North America.

In 2010, Israel ranked 17th among the world’s most economically developed nations, according to IMD’s World Competitiveness Yearbook. The Israeli economy was ranked as the world’s most durable economy in the face of crises, and was also ranked first in the rate of research and development center investments.

Israel is a leading country in the development of solar energy. Israel is a global leader in water conservation and geothermal energy, and its development of cutting-edge technologies in software, communications and the life sciences have evoked comparisons with Silicon Valley. According to the OECD, Israel is also ranked 1st in the world in expenditure on Research and Development (R&D) as a percentage of GDP. Intel and Microsoft built their first overseas research and development centers in Israel, and other high-tech multi-national corporations, such as IBM, Google, Apple, HP, Cisco Systems, and Motorola, have opened R&D facilities in the country. In July 2007, American billionaire Warren Buffett’s Berkshire Hathaway bought an Israeli company, Iscar, its first non-U.S. acquisition, for $4 billion. Since the 1970s, Israel has received military aid from the United States, as well as economic assistance in the form of loan guarantees, which now account for roughly half of Israel’s external debt. Israel has one of the lowest external debts in the developed world, and is a net lender in terms of net external debt (the total value of assets vs. liabilities in debt instruments owed abroad), which in June 2012 stood at a surplus of US$60 billion.

Days of working time in Israel are Sunday through Thursday (for a five-day workweek), or Friday (for a six-day workweek). In observance of Shabbat, in places where Friday is a work day and the majority of population is Jewish, Friday is a “short day”, usually lasting till 14:00 in the winter, or 16:00 in the summer. Several proposals have been raised to adjust the work week with the majority of the world, and make Sunday a non-working day, while extending working time of other days, and/or replacing Friday with Sunday as a work day.

Israel’s diverse culture stems from the diversity of the population: Jews from diaspora communities around the world have brought their cultural and religious traditions back with them, creating a melting pot of Jewish customs and beliefs. Israel is the only country in the world where life revolves around the Hebrew calendar. Work and school holidays are determined by the Jewish holidays, and the official day of rest is Saturday, the Jewish Sabbath. Israel’s substantial Arab minority has also left its imprint on Israeli culture in such spheres as architecture, music, and cuisine.