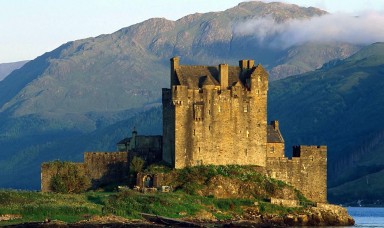 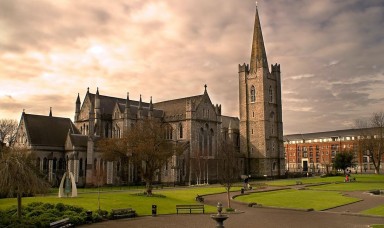 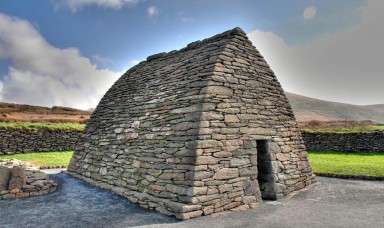 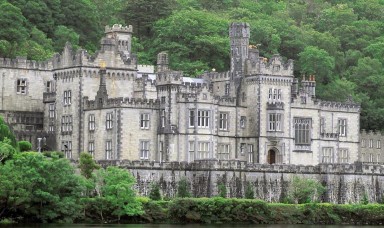 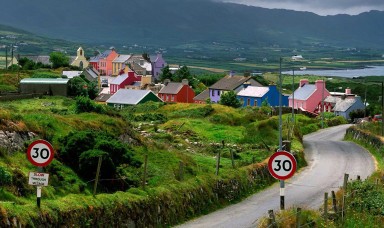 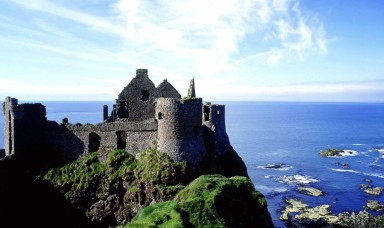 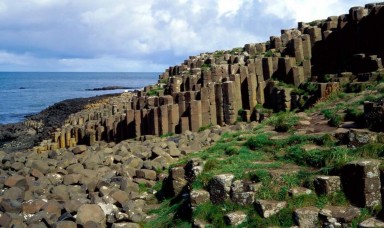 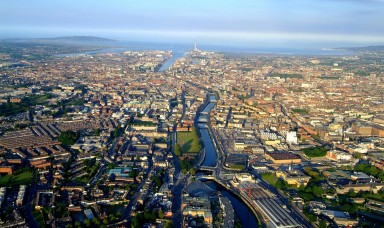 Ireland is an island to the north-west of continental Europe. It is the third-largest island in Europe and the twentieth-largest island on Earth. To its east is the island of Great Britain, from which it is separated by the Irish Sea.

The island of Ireland is located in the north-west of Europe, between latitudes 51° and 56° N, and longitudes 11° and 5° W. It is separated from the neighbouring island of Great Britain by the Irish Sea and the North Channel, which has a width of 23 kilometres (14 mi) at its narrowest point. To the west is the northern Atlantic Ocean and to the south is the Celtic Sea, which lies between Ireland and Brittany, in France. Ireland has a total area of 84,421 km2 (32,595 sq mi) Ireland and Great Britain, together with nearby islands, are known collectively as the British Isles. As the term British Isles is controversial in relation to Ireland, the alternate term Britain and Ireland is often used as a neutral term for the islands.

A ring of coastal mountains surround low plains at the centre of the island. The highest of these is Carrauntoohil (Irish: Corrán Tuathail) in County Kerry, which rises to 1,038 m (3,406 ft) above sea level. The most arable land lies in the province of Leinster. Western areas can be mountainous and rocky with green panoramic vistas. The River Shannon, the island’s longest river at 386 km (240 mi) long, rises in County Cavan in the north west and flows 113 kilometres (70 mi) to Limerick city in the mid west.

The island’s lush vegetation, a product of its mild climate and frequent rainfall, earns it the sobriquet the Emerald Isle. Overall, Ireland has a mild but changeable oceanic climate with few extremes. The climate is typically insular and is temperate avoiding the extremes in temperature of many other areas in the world at similar latitudes. This is a result of the moderating moist winds which ordinarily prevail from the South-Western Atlantic.

Precipitation falls throughout the year but is light overall, particularly in the east. The west tends to be wetter on average and prone to Atlantic storms, especially in the late autumn and winter months. These occasionally bring destructive winds and higher total rainfall to these areas, as well as sometimes snow and hail. The regions of north County Galway and east County Mayo have the highest incidents of recorded lightning annually for the island, with lightning occurring approximately five to ten days per year in these areas. Munster, in the south, records the least snow whereas Ulster, in the north, records the most.

Inland areas are warmer in summer and colder in winter. Usually around 40 days of the year are below freezing 0 °C (32 °F) at inland weather stations, compared to 10 days at coastal stations. Ireland is sometimes affected by heat waves, most recently in 1995, 2003, 2006 and 2013. In common with the rest of Europe, Ireland experienced unusually cold weather during the winter of 2009/10. Temperatures fell as low as −17.2 °C (1 °F) in County Mayo on 20 December and up to a metre (3 ft) of snow in mountainous areas.

The island consists of varied geological provinces. In the far west, around County Galway and County Donegal, is a medium to high grade metamorphic and igneous complex of Caledonide affinity, similar to the Scottish Highlands. Across southeast Ulster and extending southwest to Longford and south to Navan is a province of Ordovician and Silurian rocks, with similarities to the Southern Uplands province of Scotland. Further south, along the County Wexford coastline, is an area of granite intrusives into more Ordovician and Silurian rocks, like that found in Wales.

In the southwest, around Bantry Bay and the mountains of Macgillicuddy’s Reeks, is an area of substantially deformed, but only lightly metamorphosed, Devonian-aged rocks. This partial ring of “hard rock” geology is covered by a blanket of Carboniferous limestone over the centre of the country, giving rise to a comparatively fertile and lush landscape. The west-coast district of the Burren around Lisdoonvarna has well-developed karst features. Significant stratiform lead-zinc mineralisation is found in the limestones around Silvermines and Tynagh.

Hydrocarbon exploration is ongoing following the first major find at the Kinsale Head gas field off Cork in the mid-1970s. In 1999, economically significant finds of natural gas were made in the Corrib Gas Field off the County Mayo coast. This has increased activity off the west coast in parallel with the “West of Shetland” step-out development from the North Sea hydrocarbon province. The Helvick oil field, estimated to contain over 28 million barrels (4,500,000 m3) of oil, is another recent discovery.

People have lived in Ireland for over 9,000 years, although only a limited amount is known about the palaeolithic, neolithic and Bronze Age inhabitants of the island. Early historical and genealogical records note the existence of dozens of different peoples that may or may not be mythological, for example the Cruithne, Attacotti, Conmaicne, Eóganachta, Érainn, and Soghain, to name but a few. Over the past 1000 years or so, Vikings, Normans, Scots and English have all added to the Gaelic population and have had significant influences on Irish culture.

Ireland’s largest religious group is Christianity. The largest denomination is Roman Catholicism representing over 73% for the island (and about 87% of the Republic of Ireland). Most of the rest of the population adhere to one of the various Protestant denominations (about 48% of Northern Ireland). The largest is the Anglican Church of Ireland. The Muslim community is growing in Ireland, mostly through increased immigration. The island has a small Jewish community. About 4% of the Republic’s population and about 14% of the Northern Ireland population describe themselves as of no religion. In a 2010 survey conducted on behalf of the Irish Times, 32% of respondents said they went to a religious service more than once a week.

The population of Ireland rose rapidly from the 16th century until the mid-19th century, but a devastating famine in the 1840s caused one million deaths and forced over one million more to emigrate in its immediate wake. Over the following century the population was reduced by over half, at a time when the general trend in European countries was for populations to rise by an average of three-fold.

Despite the two jurisdictions using two distinct currencies (the euro and pound sterling), a growing amount of commercial activity is carried out on an all-island basis. This has been facilitated by the two jurisdictions’ shared membership of the European Union, and there have been calls from members of the business community and policymakers for the creation of an “all-island economy” to take advantage of economies of scale and boost competitiveness.

Ireland has an ancient industry based on peat (known locally as “sod” or “turf”) as a source of energy for home fires. A form of biomass energy, this source of heat is still widely used in rural areas. In cities, heat is generally supplied by heating oil, although some urban suppliers distribute “sods of turf” as “smokeless fuel.”

An area in which the island operates as a single market is electricity. For much of their existence electricity networks in the Republic of Ireland and Northern Ireland were entirely separate. Both networks were designed and constructed independently post partition. However, as a result of changes over recent years they are now connected with three interlinks and also connected through Great Britain to mainland Europe. The situation in Northern Ireland is complicated by the issue of private companies not supplying Northern Ireland Electricity (NIE) with enough power. In the Republic of Ireland, the ESB has failed to modernise its power stations and the availability of power plants has recently averaged only 66%, one of the worst such rates in Western Europe. EirGrid is building a HVDC transmission line between Ireland and Great Britain with a capacity of 500 MW, about 10% of Ireland’s peak demand.

As with electricity, the natural gas distribution network is also now all-island, with a pipeline linking Gormanston, County Meath, and Ballyclare, County Antrim. Most of Ireland’s gas comes through interconnectors between Twynholm in Scotland and Ballylumford, County Antrim and Loughshinny, County Dublin. A decreasing supply is coming from the Kinsale gas field off the County Cork coast and the Corrib Gas Field off the coast of County Mayo has yet to come on-line. The County Mayo field is facing some localised opposition over a controversial decision to refine the gas onshore.

Research and development in Ireland in renewable energy such as wind power has increased since 2004. Large wind farms are being constructed in coastal counties such as Cork, Donegal, Mayo and Antrim. The construction of wind farms has in some cases been delayed by opposition from local communities, some of whom overall consider the wind turbines to be unsightly. The Republic of Ireland is also hindered by an ageing network that was not designed to handle the varying availability of power that comes from wind farms. The ESB’s Turlough Hill facility is the only power-storage facility in the state.

Ireland’s culture comprises elements of the culture of ancient peoples, later immigrant and broadcast cultural influences (chiefly Gaelic culture, Anglicisation, Americanisation and aspects of broader European culture). In broad terms, Ireland is regarded as one of the Celtic ‘nations’ of Europe with Scotland, Wales, Cornwall, Isle of Man and Brittany. This combination of cultural influences is visible in the intricate designs termed Irish interlace or Celtic knotwork. These can be seen in the ornamentation of medieval religious and secular works. The style is still popular today in jewellery and graphic art, as is the distinctive style of traditional Irish music and dance, and has become indicative of modern “Celtic” culture in general.

Religion has played a significant role in the cultural life of the island since ancient times (and since the 17th century plantations, has been the focus of political identity and divisions on the island). Ireland’s pre-Christian heritage fused with the Celtic Church following the missions of Saint Patrick in the 5th century. The Hiberno-Scottish missions, begun by the Irish monk Saint Columba, spread the Irish vision of Christianity to pagan England and the Frankish Empire. These missions brought written language to an illiterate population of Europe during the Dark Ages that followed the fall of Rome, earning Ireland the sobriquet, “the island of saints and scholars”. Since the 20th century the Irish pubs worldwide have become, especially those with a full range of cultural and gastronomic offerings, outposts of Irish culture.

The Republic of Ireland’s national theatre is the Abbey Theatre founded in 1904 and the national Irish-language theatre is An Taibhdhearc, established in 1928 in Galway. Playwrights such as Seán O’Casey, Brian Friel, Sebastian Barry, Conor McPherson and Billy Roche are internationally renowned.