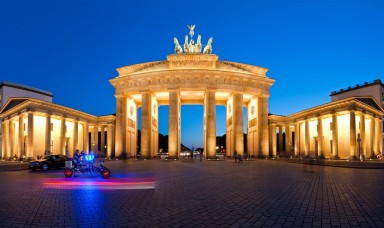 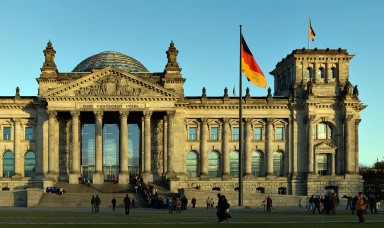 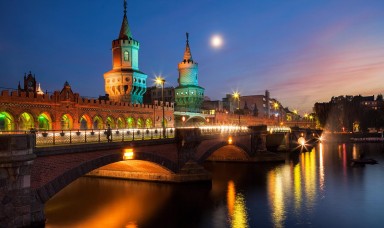 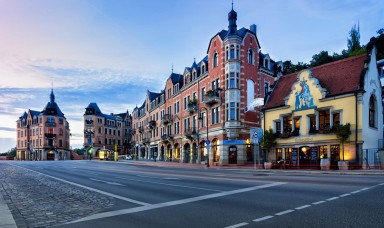 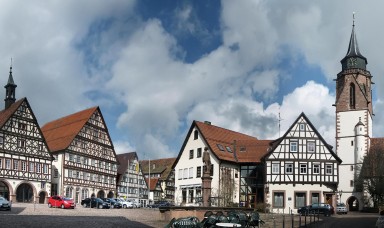 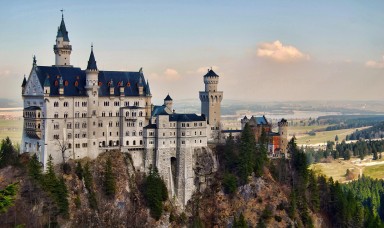 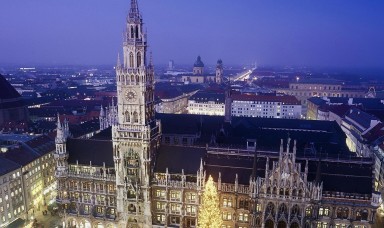 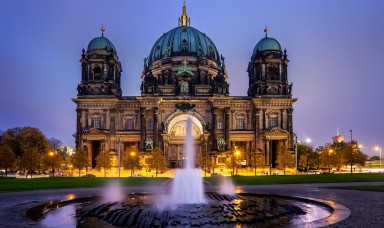 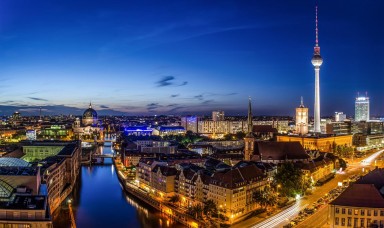 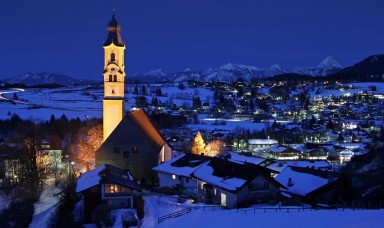 Germany, officially the Federal Republic of Germany (German: Bundesrepublik Deutschland, pronounced ˈdɔʏtʃlant]), is a federal parliamentary republic in western-central Europe. The country consists of 16 states and its capital and largest city is Berlin. Germany covers an area of 357,021 square kilometres (137,847 sq mi) and has a largely temperate seasonal climate. With 80.3 million inhabitants, it is the most populous member state in the European Union. Germany is the major economic and political power of the European continent and a historic leader in many cultural, theoretical and technical fields.

Elevation ranges from the mountains of the Alps (highest point: the Zugspitze at 2,962 metres or 9,718 feet) in the south to the shores of the North Sea (Nordsee) in the northwest and the Baltic Sea (Ostsee) in the northeast. The forested uplands of central Germany and the lowlands of northern Germany (lowest point: Wilstermarsch at 3.54 metres or 11.6 feet below sea level) are traversed by such major rivers as the Rhine, Danube and Elbe. Glaciers are found in the Alpine region, but are experiencing deglaciation. Significant natural resources are iron ore, coal, potash, timber, lignite, uranium, copper, natural gas, salt, nickel, arable land and water.

With a population of 80.2 million according to the May 2011 census, Germany is the most populous country in the European Union, the second most populous country in Europe after Russia, and ranks as the 16th most populous country in the world. Its population density stands at 225 inhabitants per square kilometre. The overall life expectancy in Germany at birth is 80.19 years (77.93 years for males and 82.58 years for females). The fertility rate of 1.41 children born per woman (2011 estimates), or 8.33 births per 1000 inhabitants, is one of the lowest in the world. Since the 1970s, Germany’s death rate has continuously exceeded its birth rate. The Federal Statistical Office of Germany has forecast that the population could shrink to between 65 and 70 million by 2060 (depending on the level of net migration). However, such forecasts have often been proven wrong in the past, and Germany is currently witnessing increased birth rates and migration rates since the beginning of the 2010s. It is notably experiencing a strong increase in the number of well-educated migrants. In 2012, 300,000 more immigrants than emigrants were reported in Germany.

Germans by nationality make up 92.3% of the population of Germany. As of 2011 and about six million foreign citizens (7.7% of the population) were registered in Germany. Regarding ethnic background, 20% of the country’s residents, or more than 16 million people, were of foreign or partially foreign descent (including persons descending or partially descending from ethnic German repatriates), 96% of whom lived in the former West Germany or Berlin. In 2010, 2.3 million families with children under 18 years were living in Germany, in which at least one parent had foreign roots. They represented 29% of the total of 8.1 million families with minor children. Compared with 2005 – the year when the microcensus started to collect detailed information on the population with a migrant background – the proportion of migrant families has risen by 2 percentage points.

Germany comprises sixteen states which are collectively referred to as Länder. Each state has its own state constitution and is largely autonomous in regard to its internal organisation. Because of differences in size and population the subdivisions of these states vary, especially as between city states (Stadtstaaten) and states with larger territories (Flächenländer). For regional administrative purposes five states, namely Baden-Württemberg, Bavaria, Hesse, North Rhine-Westphalia and Saxony, consist of a total of 22 Government Districts (Regierungsbezirke). As of 2009 Germany is divided into 403 districts (Kreise) at a municipal level; these consist of 301 rural districts and 102 urban districts.

Germany is an advocate of closer European economic and political integration. Its commercial policies are increasingly determined by agreements among European Union (EU) members and by EU legislation. Germany introduced the common European currency, the euro, on 1 January 2002. Its monetary policy is set by the European Central Bank, which is headquartered in Frankfurt. Two decades after German reunification, standards of living and per capita incomes remain significantly higher in the states of the former West Germany than in the former East. The modernisation and integration of the eastern German economy is a long-term process scheduled to last until the year 2019, with annual transfers from west to east amounting to roughly $80 billion. In January 2009 the German government approved a €50 billion economic stimulus plan to protect several sectors from a downturn and a subsequent rise in unemployment rates.

Of the world’s 500 largest stock-market-listed companies measured by revenue in 2010, the Fortune Global 500, 37 are headquartered in Germany. 30 Germany-based companies are included in the DAX, the German stock market index. Well-known global brands are Mercedes-Benz, BMW, SAP, Siemens, Volkswagen, Adidas, Audi, Allianz, Porsche, Bayer, Bosch, and Nivea. Germany is recognised for its specialised small and medium enterprises. Around 1,000 of these companies are global market leaders in their segment and are labelled hidden champions.

From its roots, culture in German states has been shaped by major intellectual and popular currents in Europe, both religious and secular. Historically Germany has been called Das Land der Dichter und Denker (“the land of poets and thinkers”), because of the major role its famous writers and philosophers have played in the development of Western thought and culture.

The federated states are in charge of the cultural institutions. There are 240 subsidised theatres, hundreds of symphonic orchestras, thousands of museums and over 25,000 libraries spread in Germany. These cultural opportunities are enjoyed by many: there are over 91 million German museum visits every year; annually, 20 million go to theatres and operas; 3.6 million per year listen to the symphonic orchestras. As of 2012 the UNESCO inscribed 37 properties in Germany on the World Heritage List.

Germany has established a high level of gender equality, promotes disability rights, and is legally and socially tolerant towards homosexuals. Gays and lesbians can legally adopt their partner’s biological children, and civil unions have been permitted since 2001. Germany has also changed its attitude towards immigrants; since the mid-1990s, the government and the majority of Germans have begun to acknowledge that controlled immigration should be allowed based on qualification standards. Germany has been named the world’s second most valued nation among 50 countries in 2010. A global opinion poll for the BBC revealed that Germany is recognised for having the most positive influence in the world in 2011, and for being the most positively viewed nation in the world, in 2013.