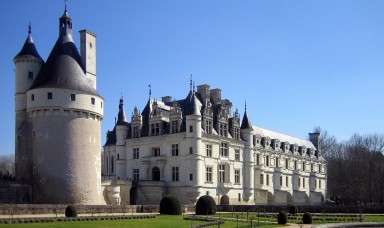 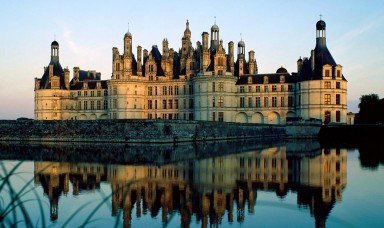 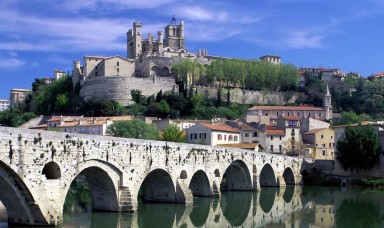 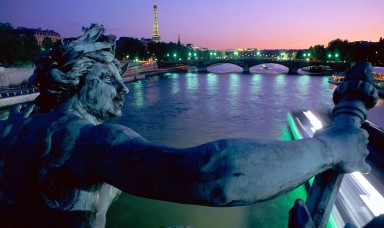 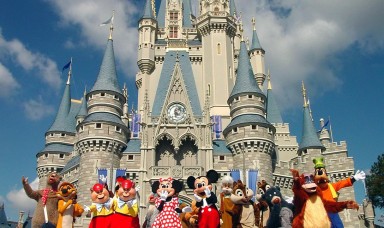 France (UK /ˈfrɑːns/; US Listeni/ˈfræns/; French: [fʁɑ̃s] ( listen)), officially the French Republic (French: République française [ʁepyblik fʁɑ̃sɛz]), is a sovereign country in Western Europe that includes overseas regions and territories.[note 12] Metropolitan France extends from the Mediterranean Sea to the English Channel and the North Sea, and from the Rhine to the Atlantic Ocean. It is one of only three countries (besides Morocco and Spain) to have both Atlantic and Mediterranean coastlines. Due to its shape, it is often referred to in French as l’Hexagone (“The Hexagon”).

Metropolitan France is situated mostly between latitudes 41° and 51° N, and longitudes 6° W and 10° E, on the western edge of Europe, and thus lies within the northern temperate zone.

From northeast to southwest, France shares borders with Belgium, Luxembourg, Germany, Switzerland, Italy, Monaco, Spain and Andorra. France also borders Suriname to its west and Brazil to its east and south, by way of the overseas region of French Guiana, which is considered an integral part of the Republic.

Corsica and the French mainland form Metropolitan France; Guadeloupe, Martinique, Réunion, and Mayotte form, with French Guiana, the overseas regions. These two integral groupings, along with several overseas collectivities and one territory, comprise the French Republic.

The European territory of France covers 547,030 square kilometres (211,209 sq mi), the largest among European Union members. France possesses a wide variety of landscapes, from coastal plains in the north and west to mountain ranges of the Alps in the south-east, the Massif Central in the south-central and Pyrenees in the south-west.

At 4,810.45 metres (15,782 ft) above sea level, the highest point in Western Europe, Mont Blanc, is situated in the Alps on the border between France and Italy. France also has extensive river systems such as the Seine, the Loire, the Garonne, and the Rhone, which divides the Massif Central from the Alps and flows into the Mediterranean Sea at the Camargue. Corsica lies off the Mediterranean coast.

With an estimated population of 66 million people in July 2013, France is the 21st most populous country in the world.

In 2003, France’s natural population growth (excluding immigration) was responsible for almost all natural population growth in the European Union. The natural growth rate (excess of births over deaths) rose to 300,000 in 2006, its highest since the end of the baby boom in 1973. The total fertility rate rose to 2 in 2010, from a nadir of 1.7 in 1994. From 2006 to 2011 population growth was on average +0.6% per year. In 2010, 27% of newborns in metropolitan France had at least one foreign-born parent and 24% had at least one parent born outside of Europe (parents born in overseas territories are considered as born in France).

In 2008, the French national institute of statistics INSEE estimated that 11.8 million foreign-born immigrants and their direct descendants (born in France) lived in France, representing 19% of the country’s population. More than 5 million are of European origin and 4 million of Maghrebi origin. There are 2.7 million immigrants aged 18–50 (accounting for 10% of the population aged 18–50) and 5 million altogether (8% of the entire population). The second generation aged 18–50 make up 3.1 million (12% of 18–50) and 6.5 million for all ages (11% of population) In 2008, France granted citizenship to 137,000 persons, mostly to people from Morocco, Algeria and Turkey.

It is currently estimated that 40% of the French population is descended at least partially from the different waves of immigration the country has received. Between 1921 and 1935 about 1.1 million net immigrants came to France. An estimated 1.6 million pieds noirs returned to France as the country’s North African possessions gained independence.

France accepts about 200,000 legal immigrants each year. France is the leading asylum destination in Western Europe with an estimated 50,000 applications in 2005 (a 15% decrease from 2004). The European Union allows free movement between the member states, France however put in place controls to curb Eastern European migration.

France is divided into 27 administrative regions. 22 are in metropolitan France (21 are on the continental part of metropolitan France; one is the territorial collectivity of Corsica), and five are overseas regions. The regions are further subdivided into 101 departments which are numbered (mainly alphabetically). This number is used in postal codes and vehicle number plates amongst others.

The regions, departments and communes are all known as territorial collectivities, meaning they possess local assemblies as well as an executive. Arrondissements and cantons are merely administrative divisions. However, this was not always the case. Until 1940, the arrondissements were territorial collectivities with an elected assembly, but these were suspended by the Vichy regime and definitely abolished by the Fourth Republic in 1946.

A member of the G8 group of leading industrialised countries, it is ranked as the world’s seventh largest and the EU’s second largest economy by purchasing power parity. With 39 of the 500 biggest companies in the world in 2010, France ranks fourth in the Fortune Global 500, ahead of Germany and the UK. France joined 11 other EU members to launch the euro in 1999, with euro coins and banknotes completely replacing the French franc (₣) in 2002.

France has a mixed economy which combines extensive private enterprise with substantial state enterprise and government intervention. The government retains considerable influence over key segments of infrastructure sectors, with majority ownership of railway, electricity, aircraft, nuclear power and telecommunications. It has been relaxing its control over these sectors since the early 1990s. The government is slowly corporatising the state sector and selling off holdings in France Télécom, Air France, as well as in the insurance, banking, and defence industries. France has an important aerospace industry led by the European consortium Airbus, and has its own national spaceport, the Centre Spatial Guyanais.

According to the World Trade Organization (WTO), in 2009 France was the world’s sixth largest exporter and the fourth largest importer of manufactured goods. In 2008, France was the third largest recipient of foreign direct investment among OECD countries at $118 billion, ranking behind Luxembourg (where foreign direct investment was essentially monetary transfers to banks located there) and the US ($316 billion), but above the UK ($96.9 billion), Germany ($25 billion), or Japan ($24 billion).

In the same year, French companies invested $220 billion outside France, ranking France as the second largest outward direct investor in the OECD, behind the US ($311 billion), and ahead of the UK ($111 billion), Japan ($128 billion) and Germany ($157 billion).

French companies have maintained key positions in the insurance and banking industries: AXA is the world’s largest insurance company. The leading French banks are BNP Paribas and the Crédit Agricole, ranking as the world’s first and sixth largest banks in 2010 (by assets), while the Société Générale group was ranked the world’s eighth largest in 2009.

France is the smallest emitter of carbon dioxide among the G8, due to its heavy investment in nuclear power. As a result of large investments in nuclear technology, most electricity produced by France is generated by 59 nuclear power plants (75% in 2012). In this context, renewable energies are having difficulty taking off.

France has been a center of Western cultural development for centuries. Many French artists have been among the most renowned of their time, and France is still recognized in the world for its rich cultural tradition.

The successive political regimes have always promoted artistic creation, and the creation of the Ministry of Culture in 1959 helped preserve the cultural heritage of the country and make it available to the public. The Ministry of Culture has been very active since its creation, granting subsidies to artists, promoting French culture in the world, supporting festivals and cultural events, protecting historical monuments. The French government also succeeded in maintaining a cultural exception to defend audiovisual products made in the country.

France receives the highest number of tourists per year, largely thanks to the numerous cultural establishments and historical buildings implanted all over the territory. It counts 1,200 museums welcoming more than 50 million people annually. The most important cultural sites are run by the government, for instance through the public agency Centre des monuments nationaux, which is responsible for approximately 85 national historical monuments.

The 43,180 buildings protected as historical monuments include mainly residences (many castles, or châteaux in French) and religious buildings (cathedrals, basilicas, churches, etc.), but also statutes, memorials and gardens. The UNESCO inscribed 38 sites in France on the World Heritage List.