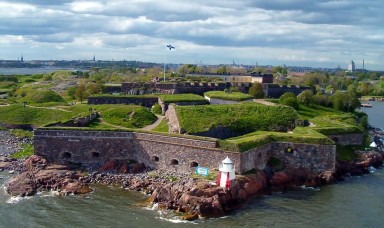 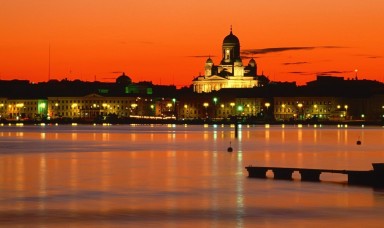 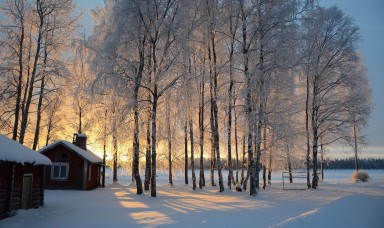 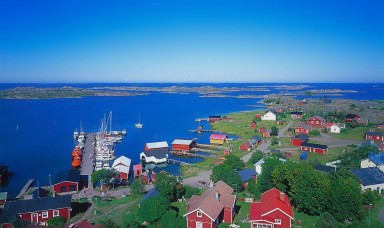 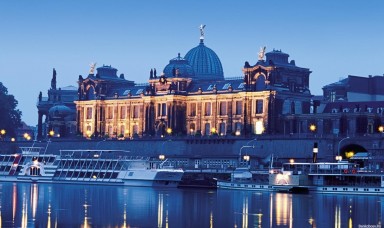 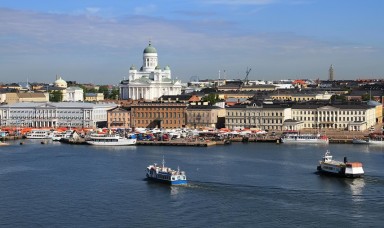 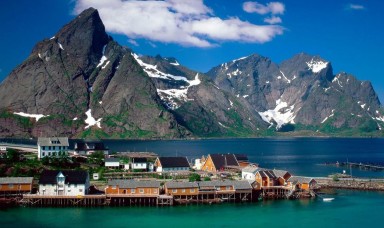 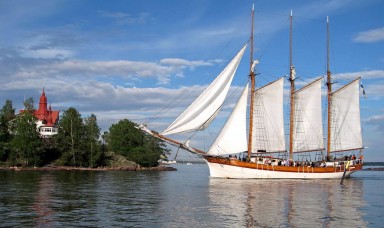 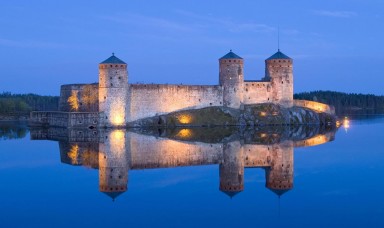 Finland officially the Republic of Finland, is a Nordic country situated in the Fennoscandian region of Northern Europe. It is bordered by Sweden to the west, Norway to the north, Russia to the east, and Estonia to the south across the Gulf of Finland.

Lying approximately between latitudes 60° and 70° N, and longitudes 20° and 32° E, Finland is one of the world’s northernmost countries. Of world capitals, only Reykjavík lies more to the north than Helsinki. The distance from the southernmost—Hanko—to the northernmost point in the country—Nuorgam—is 1,160 kilometres (720 mi).

Finland is a country of thousands of lakes and islands—about 188,000 lakes (larger than 500 m2 or 0.12 acre) and 179,000 islands. Its largest lake, Saimaa, is the fourth largest in Europe. The area with most lakes is called Finnish Lakeland. The greatest concentration of islands is found in the southwest in the Archipelago Sea between continental Finland and the main island of Åland.

Much of the geography of Finland is explained by the Ice Age. The glaciers were thicker and lasted longer in Fennoscandia compared to the rest of Europe. Their eroding effects have left the Finnish landscape mostly flat with few hills and fewer mountains. Its highest point, the Halti at 1,324 metres (4,344 ft), is found in the extreme north of Lapland at the border between Finland and Norway. The highest mountain whose peak is entirely in Finland is Ridnitsohkka at 1,316 m (4,318 ft), directly adjacent to Halti.

The retreating glaciers have left the land with morainic deposits in formations of eskers. These are ridges of stratified gravel and sand, running northwest to southeast, where the ancient edge of the glacier once lay. Among the biggest of these are the three Salpausselkä ridges that run across southern Finland.

Having been compressed under the enormous weight of the glaciers, terrain in Finland is rising due to the post-glacial rebound. The effect is strongest around the Gulf of Bothnia, where land steadily rises about 1 cm (0.4 in) a year. As a result, the old sea bottom turns little by little into dry land: the surface area of the country is expanding by about 7 square kilometres (2.7 sq mi) annually. Relatively speaking, Finland is rising from the sea.

Forest covers 86% of the country’s land area, the largest forested area in Europe. The forest consists of pine, spruce, birch and other species. Finland is the largest producer of wood in Europe and among the largest in the world.

The landscape is covered mostly (75% of land area) by coniferous taiga forests and fens, with little arable land. The most common type of rock is granite. It is a ubiquitous part of the scenery, visible wherever there is no soil cover. Moraine or till is the most common type of soil, covered by a thin layer of humus of biological origin. Podzol profile development is seen in most forest soils except where drainage is poor. Gleysols and peat bogs occupy poorly drained areas.

The population of Finland is currently about 5,400,000. Finland has an average population density of 16 inhabitants per square kilometre. This is the third-lowest population density of any European country, behind those of Norway and Iceland. Finland’s population has always been concentrated in the southern parts of the country, a phenomenon that became even more pronounced during 20th-century urbanisation. The largest cities in Finland are those of the Greater Helsinki metropolitan area—Helsinki, Espoo and Vantaa. Other cities with population over 100.000 are Tampere, Turku, Oulu, Jyväskylä and Lahti.

The share of foreign citizens in Finland is 3.4%, among the lowest in the European Union. Most of them are from Russia, Estonia and Sweden. The children of foreigners are not automatically given Finnish citizenship. If they are born in Finland and cannot get citizenship of any other country, they become citizens.

The fundamental administrative divisions of the country are the municipalities, which may also call themselves towns or cities. They account for half of public spending. Spending is financed by municipal income tax, state subsidies, and other revenue. There are 336 municipalities, and most have fewer than 6,000 residents. People often identify with their municipality.needed]

In addition to municipalities, two intermediate levels are defined. Municipalities co-operate in seventy sub-regions and nineteen regions. These are governed by the member municipalities and have only limited powers. The autonomous province of Åland has a permanent democratically elected regional council. In the Kainuu region, there is a pilot project underway with regional elections. Sami people have a semi-autonomous Sami Domicile Area in Lapland for issues on language and culture.

In the following chart, the number of inhabitants includes those living in the entire municipality (kunta/kommun), not just in the built-up area. The land area is given in km², and the density in inhabitants per km² (land area). The figures are as of 31 August 2013. The capital region – comprising Helsinki, Vantaa, Espoo and Kauniainen – forms a continuous conurbation of one million people. However, common administration is limited to voluntary cooperation of all municipalities, e.g. in Helsinki Metropolitan Area Council.

Finland has a highly industrialized mixed economy with a per capita output equal to that of other European economies such as France, Germany, Belgium or the UK. The largest sector of the economy is services at 66%, followed by manufacturing and refining at 31%. Primary production is 2.9%. With respect to foreign trade, the key economic sector is manufacturing. The largest industries are electronics (22%), machinery, vehicles and other engineered metal products (21.1%), forest industry (13%) and chemicals (11%).

Finland has timber and several mineral and freshwater resources. Forestry, paper factories, and the Agriculture|agricultural sector (on which taxpayers spend around 3 billion euros annually) are politically sensitive to rural residents. The Greater Helsinki area generates around a third of GDP. In a 2004 OECD comparison, high-technology manufacturing in Finland ranked second largest after Ireland. Knowledge-intensive services have also ranked the smallest and slow-growth sectors – especially agriculture and low-technology manufacturing – second largest after Ireland. Overall short-term outlook was good and GDP growth has been above many EU peers.

Finland is highly integrated in the global economy, and international trade is a third of GDP. The European Union makes 60% of the total trade.needed] The largest trade flows are with Germany, Russia, Sweden, United Kingdom, United States, Netherlands and China. Trade policy is managed by the European Union, where Finland has traditionally been among the free trade supporters, except for agriculture. Finland is the only Nordic country to have joined the Eurozone.

Finland’s climate and soils make growing crops a particular challenge. The country lies between latitudes 60°N and 70°N, and has severe winters and relatively short growing seasons that are sometimes interrupted by frosts. However, because the Gulf Stream and the North Atlantic Drift Current moderate the climate, Finland contains half of the world’s arable land north of 60° north latitude. Annual precipitation is usually sufficient, but it occurs almost exclusively during the winter months, making summer droughts a constant threat. In response to the climate, farmers have relied on quick-ripening and frost-resistant varieties of crops, and they have cultivated south-facing slopes as well as richer bottomlands to ensure production even in years with summer frosts. Most farmland had originally been either forest or swamp, and the soil had usually required treatment with lime and years of cultivation to neutralize excess acid and to develop fertility. Irrigation was generally not necessary, but drainage systems were often needed to remove excess water. Finland’s agriculture was efficient and productive—at least when compared with farming in other European countries.

Forests play a key role in the country’s economy, making it one of the world’s leading wood producers and providing raw materials at competitive prices for the crucial wood-processing industries. As in agriculture, the government has long played a leading role in forestry, regulating tree cutting, sponsoring technical improvements, and establishing long-term plans to ensure that the country’s forests continue to supply the wood-processing industries. To maintain the country’s comparative advantage in forest products, Finnish authorities moved to raise lumber output toward the country’s ecological limits. In 1984 the government published the Forest 2000 plan, drawn up by the Ministry of Agriculture and Forestry. The plan aimed at increasing forest harvests by about 3% per year, while conserving forestland for recreation and other uses.

Private sector employees amount to 1.8 million, out of which around a third with tertiary education. The average cost of a private sector employee per hour was 25.1 euros in 2004. As of 2008 average purchasing power-adjusted income levels are similar to those of Italy, Sweden, Germany and France. In 2006, 62% of the workforce worked for enterprises with less than 250 employees and they accounted for 49% of total business turnover and had the strongest rate of growth. The female employment rate is high. Gender segregation between male-dominated professions and female-dominated professions is higher than in the US. The proportion of part-time workers was one of the lowest in OECD in 1999.

The employment rate was 68% and the unemployment rate was 6.8% in early 2008. 18% of residents are outside the job market at the age of 50 and less than a third are working at the age of 61. Unfunded pensions and other promises such as health insurances are a dominant future liability, though Finland is much better prepared than countries such as France or Germany. Directly held public debt has been reduced to around 32% of GDP in 2007. In 2007, the average household savings rate was −3.8 and household debt 101% of annual disposable income, a typical level in Europe. Home ownership rate is 60%.

Around 92% have a mobile phone and 83.5% (2009) Internet connection at home. The average total household consumption was 20,000 euro, out of which housing consisted of about 5500 euro, transport about 3000 euro, food and beverages excluding alcoholic beverages at around 2500 euro, and recreation and culture at around 2000 euro. According to Invest in Finland, private consumption grew by 3% in 2006 and consumer trends included durables, high quality products, and spending on well-being.

The culture of Finland combines indigenous heritage, as represented for example by the country’s Uralic national language Finnish, and the sauna, with common Nordic, Russian and European culture. Because of its history and geographic location Finland has been influenced by the adjacent areas various Finnic and Baltic peoples as well as the former dominant powers Sweden and Russia. Finnish culture may be seen to build upon the relatively ascetic environmental realities, traditional livelihoods and a heritage of egalitarianism, (see e.g.: Everyman’s right and universal suffrage) and the traditionally widespread ideal of self-sufficiency (see, e.g.: Summer cottage).

There are still cultural differences between Finland’s regions, especially minor differences in accents and vocabulary. Minorities, some of which enjoy a status recognised by the state, such as the Sami, Swedish-speaking Finns, Romani, Jews, and Tatar, maintain their own cultural characteristics. Many Finns are emotionally connected to the countryside and nature, as large scale urbanisation is a relatively recent phenomenon.