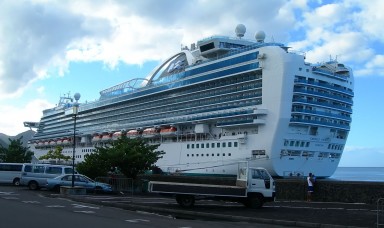 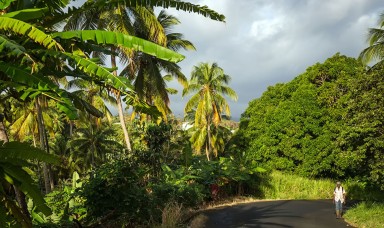 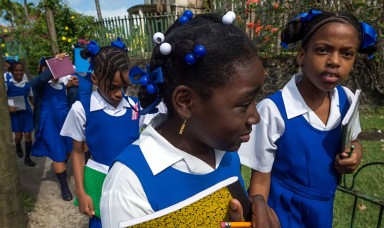 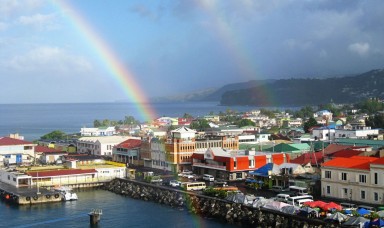 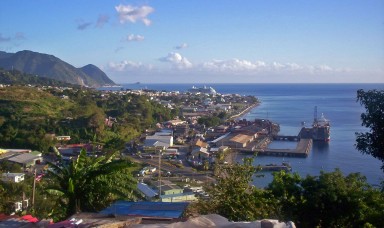 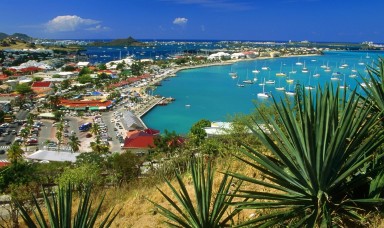 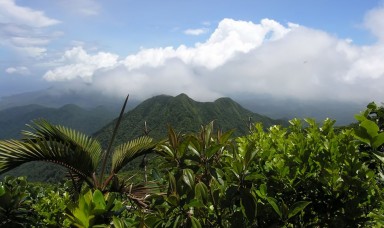 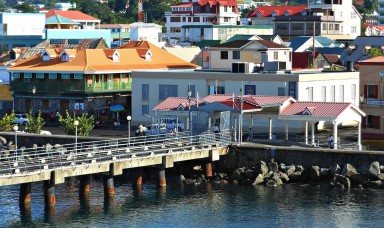 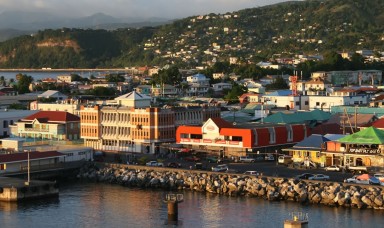 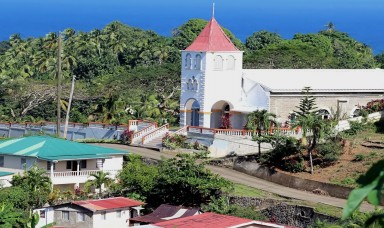 Dominica, officially the Commonwealth of Dominica, is an island nation in the Lesser Antilles region of the Caribbean Sea, south-southeast of Guadeloupe and northwest of Martinique. Its size is 750 square kilometres (290 sq mi) and the highest point in the country is Morne Diablotins, which has an elevation of 1,447 metres (4,747 ft). The Commonwealth of Dominica had a population of 71,293 at the 2011 Census. The capital is Roseau which is located on the leeward side of the island.

Dominica is an island nation and borderless country in the Caribbean Sea, the northernmost of the Windward Islands (though it is sometimes considered the southernmost of the Leeward Islands). The size of the country is about 289.5 square miles (750 km2). The capital is Roseau.

Dominica is largely covered by rainforest and is home to the world’s second-largest hot spring, Boiling Lake. Dominica has many waterfalls, springs, and rivers. The Calibishie area in the country’s northeast has sandy beaches. Some plants and animals thought to be extinct on surrounding islands can still be found in Dominica’s forests. The volcanic nature of the island has attracted scuba divers. The island has several protected areas, including Cabrits National Park, as well as 365 rivers.

On his second voyage to the Caribbean, Dominica was the first New World country that Christopher Columbus discovered. It is said that when his royal sponsors asked Christopher Columbus to describe this island, he crumpled a piece of parchment roughly and threw it on the table. “This”, Columbus explained, “is what Dominica looks like—completely covered with mountains with nary a flat spot.”

Morne Trois Pitons National Park is a tropical forest blended with scenic volcanic features. It was recognised as a World Heritage Site on 4 April 1995, a distinction it shares with four other Caribbean islands.

The Commonwealth of Dominica is engaged in a long-running dispute with Venezuela over Venezuela’s territorial claims to the sea surrounding Isla Aves (literally Bird Island, but in fact called Bird Rock by Dominica authorities), a tiny islet located 140 miles (225 km) west of the island of Dominica.

Dominica, known as “The Nature Island of the Caribbean” due to its spectacular, lush, and varied flora and fauna, which are protected by an extensive natural park system; the most mountainous of the Lesser Antilles, its volcanic peaks are cones of lava craters and include Boiling Lake, the second-largest, thermally active lake in the world possesses the most pristine wilderness in the Caribbean. Originally, it was protected by sheer mountains which led the European powers to build ports and agricultural settlements on other islands. More recently, the citizens of this island have sought to preserve its spectacular natural beauty by discouraging the type of high-impact tourism which has damaged nature in most of the Caribbean.

Visitors can find large tropical forests, including one which is on the UNESCO list of World Heritage sites, hundreds of streams, coastlines and coral reefs.

The Sisserou parrot (Amazona imperialis) is Dominica’s national bird and is endemic to its mountain forests. A related species, the Jaco or Red-necked Parrot (A. arausiaca),. is also a Dominican endemic. Both birds are rare and protected nowadays, though some forest is still threatened by logging in addition to the long-standing threat of hurricanes.

Dominica is especially vulnerable to hurricanes as the island is located in what is referred to as the hurricane region. In 1979, Dominica was hit directly by category 5 Hurricane David, causing widespread and extreme damage. On 17 August 2007, Hurricane Dean, a category 1 at the time, hit the island. A mother and her seven-year-old son died when a landslide caused by the heavy rains crushed their house. In another incident two people were injured when a tree fell on their house. Prime Minister Roosevelt Skerrit estimated that 100 to 125 homes were damaged, and that the agricultural sector was extensively damaged, in particular the banana crop.

The vast majority of Dominicans are of African descent. There is a significant mixed population, along with Indo-Caribbean or East Indian groups, a small European origin minority (descendants of French, British, and Irish colonists) and there are small numbers of Lebanese, Syrians and Asians. Dominica is also the only Eastern Caribbean island that still has a population of pre-Columbian native Caribs, who were exterminated or driven from neighbouring islands. There are only about 3,000 Caribs remaining. They live in eight villages on the east coast of Dominica. This special Carib Territory was granted by the British Crown in 1903. There are also about 1,000 medical students from the United States and Canada who study at the Ross University School of Medicine in Portsmouth.

The population growth rate of Dominica is very low, due primarily to emigration to other countries. In the early 21st century, emigrant numbers for the most popular countries are as follows: the United States (8,560), the United Kingdom (6,739), Canada (605) and France (394).

It has recently been noted that Dominica has a relatively large number of centenarians. As of March 2007, there are 22 centenarians out of the island’s 70,000 inhabitants—three times the average incidence of centenarianism in developed countries. The reasons for this are the subject of current research being undertaken at Ross University School of Medicine.

At the beginning of the twentieth century the Rose’s Company, which produced Rose’s lime juice, saw demand for its product outgrow its ability to supply the product from Montserrat. Their response to the situation was to buy land on Dominica and encourage Montserrat farm labourers to relocate. As a result there came to be two linguistic communities in Dominica. Over time there has been much intermarrying, but there are still traces of difference in origin.

Dominica is a parliamentary democracy within the Commonwealth of Nations and, since 1979, a member of La Francophonie. The Commonwealth of Dominica is one of the Caribbean’s few republics. The president is the head of state, while executive power rests with the cabinet, headed by the prime minister. The unicameral parliament consists of the thirty-member House of Assembly, which consists of twenty-one directly elected members and nine senators, who may either be appointed by the president or elected by the other members of the House of Assembly.

Unlike other former British colonies in the region, Dominica was never a Commonwealth realm, instead becoming a republic on independence. Dominica is a full and participating member of the Caribbean Community (CARICOM) and the Organisation of Eastern Caribbean States (OECS).

Dominica is also a member of the International Criminal Court with a Bilateral Immunity Agreement of protection for the US military, as covered under Article 98. In January 2008 Dominica joined the Bolivarian Alternative for the Americas.

In 2008, Dominica had one of the lowest per capita gross domestic product (GDP) rates of Eastern Caribbean states. The country nearly had a financial crisis in 2003 and 2004, but Dominica’s economy grew by 3.5% in 2005 and 4.0% in 2006, following a decade of poor performance. Growth in 2006 was attributed to gains in tourism, construction, offshore and other services, and some sub-sectors of the banana industry. The International Monetary Fund (IMF) recently praised the Government of Dominica for its successful macroeconomic reforms. The IMF also pointed out remaining challenges, including the need for further reductions in public debt, increased financial sector regulation, and market diversification.

Bananas and other agriculture dominate Dominica’s economy, and nearly one-third of the labour force works in agriculture. This sector, however, is highly vulnerable to weather conditions and to external events affecting commodity prices. In 2007, Hurricane Dean caused significant damage to the agricultural sector as well as the country’s infrastructure, especially roads. In response to reduced European Union (EU) banana trade preferences, the government has diversified the agricultural sector by promoting the production of coffee, patchouli, aloe vera, cut flowers, and exotic fruits such as mango, guava, and papaya. Dominica has also had some success in increasing its manufactured exports, primarily soap.

Dominica is mostly volcanic and has few beaches; therefore, tourism has developed more slowly than on neighboring islands. Nevertheless, Dominica’s mountains, rainforests, freshwater lakes, hot springs, waterfalls, and diving spots make it an attractive eco-tourism destination. Cruise ship stopovers have increased following the development of modern docking and waterfront facilities in Roseau, the capital. Out of 22 Caribbean islands tracked, Dominica had the fewest visitors in 2008 (55,800 or 0.3% of the total). This was about half as many as visited Haiti.

Dominica is a beneficiary of the Caribbean Basin Initiative (CBI) that grants duty-free entry into the United States for many goods. Dominica also belongs to the predominantly English-speaking Caribbean Community (CARICOM), the CARICOM Single Market and Economy (CSME), and the Organisation of Eastern Caribbean States (OECS).

Dominica supposedly offers tax-free status to companies locating from abroad. It is not known how many companies benefit from the tax-free status because of the strict confidentiality the government enforces, although it is known many Internet businesses utilise Dominica for this reason. However, on 12 July 2012 Dominica signed an agreement with Poland to exchange tax information.

The Commonwealth of Dominica offers an official and legally mandated economic citizenship to those seeking a valid second passport. The nationality law of Dominica authorizes the government to waive the normal requirement of seven years of legal residence to acquire citizenship in exchange for a cash contribution. Total costs including all fees for a single applicant come to about $105,000, with an additional $25,000 specified for a spouse and up to two children under 18. The Dominican passport holders can travel without a visa, or obtain a visa upon entry, to nearly 90 countries and territories. Applying for Dominica citizenship requires interacting with official Government Approved Economic Citizenship Agents.

Dominica is home to a wide range of people. Although it was historically occupied by several native tribes, the Arawaks and Kalinago Carib tribes occupied it at the time European settlers reached the island. “Massacre” is a name of a river dedicated to the murders of the Native villagers by French and British settlers, because the river ran red with blood for days. Both the French and British tried to claim the island and imported slaves from Africa for labor. The remaining Caribs now live on a 3,700-acre (15 km2) territory on the east coast of the island. They elect their own chief. This mix of cultures has produced the current culture.

Music and dance are important facets of Dominica’s culture. The annual independence celebrations display a variety of traditional song and dance. Since 1997, there have also been weeks of Creole festivals, such as “Creole in the Park” and the “World Creole Music Festival”.

Dominica gained prominence on the international music stage when in 1973, Gordon Henderson founded the group Exile One and an original musical genre, which he coined “Cadence-lypso.” This paved the way for modern Creole music. Other musical genres include “Jing ping” and “Cadence”. Jing ping features the accordion and is native to the island. Dominica’s music is a melange of Afro-Cuban, African and European traditions. Popular artists over the years include Chubby and the Midnight Groovers, Bells Combo, the Gaylords, WCK, and Triple Kay.

The 11th annual World Creole Music Festival was held in 2007, part of the island’s celebration of independence from Great Britain on 3 November. A year-long reunion celebration began in January 2008, marking 30 years of independence.

Dominica is often seen as a society that is migrating from collectivism to that of individualism. The economy is a developing one that previously depended on agriculture. Signs of collectivism are evident in the small towns and villages which are spread across the island.

The famed novelist Jean Rhys was born and raised in Dominica. The island is obliquely depicted in her best-known book, Wide Sargasso Sea. Rhys’s friend, the political activist and writer Phyllis Shand Allfrey, set her 1954 novel, The Orchid House (ISBN 0-8135-2332-X), in Dominica.