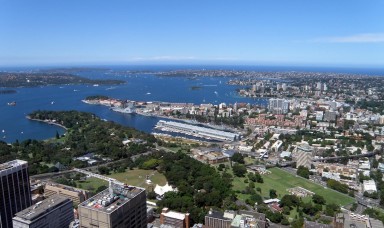 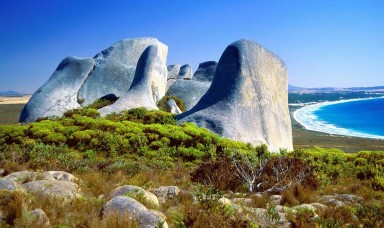 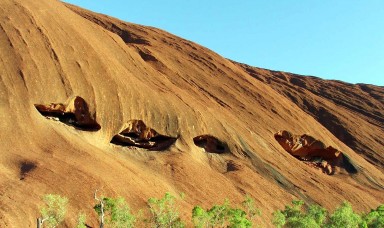 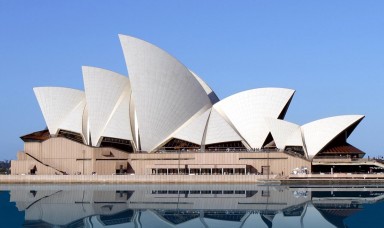 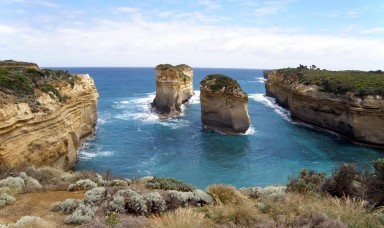 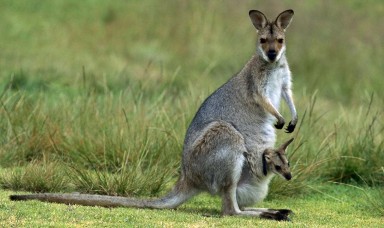 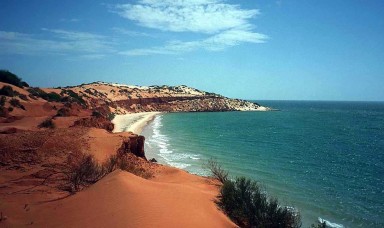 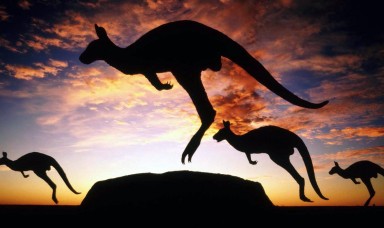 Australia, officially the Commonwealth of Australia, is a country comprising the mainland of the Australian continent, the island of Tasmania, and numerous smaller islands. It is the world’s sixth-largest country by total area. Neighbouring countries include Indonesia, East Timor and Papua New Guinea to the north; the Solomon Islands, Vanuatu and New Caledonia to the north-east; and New Zealand to the south-east.

Australia’s landmass of 7,617,930 square kilometres (2,941,300 sq mi) is on the Indo-Australian Plate. Surrounded by the Indian and Pacific oceans,5] it is separated from Asia by the Arafura and Timor seas, with the Coral Sea lying off the Queensland coast, and the Tasman Sea lying between Australia and New Zealand. The world’s smallest continent and sixth largest country by total area, Australia—owing to its size and isolation—is often dubbed the “island continent”, and is sometimes considered the world’s largest island. Australia has 34,218 kilometres (21,262 mi) of coastline (excluding all offshore islands), and claims an extensive Exclusive Economic Zone of 8,148,250 square kilometres (3,146,060 sq mi). This exclusive economic zone does not include the Australian Antarctic Territory. Excluding Macquarie Island, Australia lies between latitudes 9° and 44°S, and longitudes 112° and 154°E.

The Great Barrier Reef, the world’s largest coral reef, lies a short distance off the north-east coast and extends for over 2,000 kilometres (1,240 mi). Mount Augustus, claimed to be the world’s largest monolith, is located in Western Australia. At 2,228 metres (7,310 ft), Mount Kosciuszko on the Great Dividing Range is the highest mountain on the Australian mainland. Even taller are Mawson Peak (at 2,745 metres or 9,006 feet), on the remote Australian territory of Heard Island, and, in the Australian Antarctic Territory, Mount McClintock and Mount Menzies, at 3,492 metres (11,457 ft) and 3,355 metres (11,007 ft) respectively.

Australia’s size gives it a wide variety of landscapes, with subtropical rainforests in the north-east, mountain ranges in the south-east, south-west and east, and dry desert in the centre. It is the flattest continent, with the oldest and least fertile soils; desert or semi-arid land commonly known as the outback makes up by far the largest portion of land. The driest inhabited continent, only its south-east and south-west corners have a temperate climate. The population density, 2.8 inhabitants per square kilometre, is among the lowest in the world, although a large proportion of the population lives along the temperate south-eastern coastline.

Eastern Australia is marked by the Great Dividing Range, which runs parallel to the coast of Queensland, New South Wales and much of Victoria. The name is not strictly accurate, because parts of the range consist of low hills, and the highlands are typically no more than 1,600 metres (5,249 ft) in height. The coastal uplands and a belt of Brigalow grasslands lie between the coast and the mountains, while inland of the dividing range are large areas of grassland. These include the western plains of New South Wales, and the Einasleigh Uplands, Barkly Tableland, and Mulga Lands of inland Queensland. The northernmost point of the east coast is the tropical-rainforested Cape York Peninsula.

Map showing the topography of Australia, showing some elevation in the west and very high elevation in mountains in the southeast

The landscapes of the northern part of the country—the Top End and the Gulf Country behind the Gulf of Carpentaria, with their tropical climate—consist of woodland, grassland, and desert. At the north-west corner of the continent are the sandstone cliffs and gorges of The Kimberley, and below that the Pilbara. To the south of these and inland, lie more areas of grassland: the Ord Victoria Plain and the Western Australian Mulga shrublands. At the heart of the country are the uplands of central Australia; prominent features of the centre and south include the inland Simpson, Tirari and Sturt Stony, Gibson, Great Sandy, Tanami, and Great Victoria deserts, with the famous Nullarbor Plain on the southern coast.

The climate of Australia is significantly influenced by ocean currents, including the Indian Ocean Dipole and the El Niño–Southern Oscillation, which is correlated with periodic drought, and the seasonal tropical low-pressure system that produces cyclones in northern Australia. These factors cause rainfall to vary markedly from year to year. Much of the northern part of the country has a tropical, predominantly summer-rainfall (monsoon) climate. The southwest corner of the country has a Mediterranean climate. Much of the southeast (including Tasmania) is temperate.

Australia’s population has quadrupled since the end of World War I. Nevertheless, its population density, 2.8 inhabitants per square kilometre, remains among the lowest in the world. Much of the population increase came from immigration. Following World War II and through to 2000, almost 5.9 million of the total population settled in the country as new immigrants, meaning that nearly two out of every seven Australians were born in another country. Most immigrants are skilled, but the immigration quota includes categories for family members and refugees. By 2050, Australia’s population is currently projected to reach around 42 million.

In 2011, 24.6% of Australians were born elsewhere and 43.1% of people had at least one overseas-born parent; the largest immigrant groups were those from the United Kingdom, New Zealand, China, India, Italy, Vietnam, and Philippines.

Over 80 percent of Australia’s population is of European ancestry, and most of the rest are of Asian heritage, with a smaller minority of indigenous (Aboriginal) background. Following the abolition of the White Australia policy in 1973, numerous government initiatives have been established to encourage and promote racial harmony based on a policy of multiculturalism. In 2005–06, more than 131,000 people emigrated to Australia, mainly from Asia and Oceania. The migration target for 2012–13 is 190,000, compared to 67,900 in 1998–99.

Aerial view of farming fields interspersed with roads, a small forest near the front of the photo

The Indigenous population—mainland Aborigines and Torres Strait Islanders—was counted at 548,370 (2.5% of the total population) in 2011, a significant increase from 115,953 in the 1976 census. The increase is partly due to many people with Indigenous heritage previously having been overlooked by the census due to undercount and cases where their Indigenous status had not been recorded on the form.

Indigenous Australians experience higher than average rates of imprisonment and unemployment, lower levels of education, and life expectancies for males and females that are 11–17 years lower than those of non-indigenous Australians. Some remote Indigenous communities have been described as having “failed state”-like conditions.

In common with many other developed countries, Australia is experiencing a demographic shift towards an older population, with more retirees and fewer people of working age. In 2004, the average age of the civilian population was 38.8 years. A large number of Australians (759,849 for the period 2002–03; 1 million or 5% of the total population in 2005) live outside their home country.

Australia has six states—New South Wales (NSW), Queensland (QLD), South Australia (SA), Tasmania (TAS), Victoria (VIC) and Western Australia (WA)—and two major mainland territories—the Australian Capital Territory (ACT) and the Northern Territory (NT). In most respects these two territories function as states, but the Commonwealth Parliament can override any legislation of their parliaments. By contrast, federal legislation overrides state legislation only in areas that are set out in Section 51 of the Australian Constitution; state parliaments retain all residual legislative powers, including those over schools, state police, the state judiciary, roads, public transport and local government, since these do not fall under the provisions listed in Section 51.

Each state and major mainland territory has its own parliament—unicameral in the Northern Territory, the ACT and Queensland—and bicameral in the other states. The states are sovereign entities, although subject to certain powers of the Commonwealth as defined by the Constitution. The lower houses are known as the Legislative Assembly (the House of Assembly in South Australia and Tasmania); the upper houses are known as the Legislative Council. The head of the government in each state is the Premier and in each territory the Chief Minister. The Queen is represented in each state by a Governor; and in the Northern Territory, the Administrator. In the Commonwealth, the Queen’s representative is the Governor-General.

Australia is a wealthy country with a market economy, a relatively high GDP per capita, and a relatively low rate of poverty. In terms of average wealth, Australia ranked second in the world after Switzerland in 2013, and the nation’s poverty rate increased from 10.2 per cent to 11.8 per cent, from 2000/01 to 2013. It was identified by the Credit Suisse Research Institute as the nation with the highest median wealth in the world and the second-highest average wealth per adult in 2013.

The Australian dollar is the currency for the nation, including Christmas Island, Cocos (Keeling) Islands, and Norfolk Island, as well as the independent Pacific Island states of Kiribati, Nauru, and Tuvalu. With the 2006 merger of the Australian Stock Exchange and the Sydney Futures Exchange, the Australian Securities Exchange became the ninth largest in the world.

Ranked third in the Index of Economic Freedom (2010), Australia is the world’s twelfth largest economy and has the fifth highest per capita GDP (nominal) at $66,984. The country was ranked second in the United Nations 2011 Human Development Index and first in Legatum’s 2008 Prosperity Index. All of Australia’s major cities fare well in global comparative livability surveys; Melbourne reached first place on The Economist’s 2011 and 2012 world’s most livable cities lists, followed by Sydney, Perth, and Adelaide in sixth, eighth, and ninth place respectively. Total government debt in Australia is about $190 billion – 20% of GDP in 2010. Australia has among the highest house prices and some of the highest household-debt levels in the world.

An emphasis on exporting commodities rather than manufactured goods has underpinned a significant increase in Australia’s terms of trade since the start of the 21st century, due to rising commodity prices. Australia has a balance of payments that is more than 7% of GDP negative, and has had persistently large current account deficits for more than 50 years. Australia has grown at an average annual rate of 3.6% for over 15 years, in comparison to the OECD annual average of 2.5%. Australia was the only advanced economy not to experience a recession due to the global financial downturn in 2008–2009. However, the economies of six of Australia’s major trading partners have been in recession, which in turn has affected Australia, significantly hampering its economic growth in recent years. From 2012 to early 2013, Australia’s national economy grew, but some non-mining states and Australia’s non-mining economy experienced a recession.

The Hawke Government floated the Australian dollar in 1983 and partially deregulated the financial system. The Howard Government followed with a partial deregulation of the labour market and the further privatisation of state-owned businesses, most notably in the telecommunications industry. The indirect tax system was substantially changed in July 2000 with the introduction of a 10% Goods and Services Tax (GST). In Australia’s tax system, personal and company income tax are the main sources of government revenue.

Over the past decade, inflation has typically been 2–3% and the base interest rate 5–6%. The service sector of the economy, including tourism, education, and financial services, accounts for about 70% of GDP. Rich in natural resources, Australia is a major exporter of agricultural products, particularly wheat and wool, minerals such as iron-ore and gold, and energy in the forms of liquified natural gas and coal. Although agriculture and natural resources account for only 3% and 5% of GDP respectively, they contribute substantially to export performance. Australia’s largest export markets are Japan, China, the US, South Korea, and New Zealand. Australia is the world’s fourth largest exporter of wine, and the wine industry contributes $5.5 billion per year to the nation’s economy.

Since 1788, the basis of Australian culture has been strongly influenced by Anglo-Celtic Western culture. Distinctive cultural features have also arisen from Australia’s natural environment and Indigenous cultures. Since the mid-20th century, American popular culture has strongly influenced Australia, particularly through television and cinema. Other cultural influences come from neighbouring Asian countries, and through large-scale immigration from non-English-speaking nations.