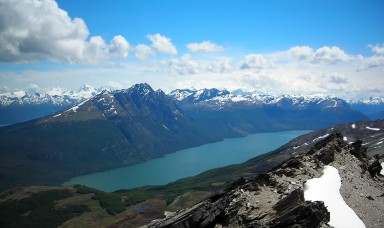 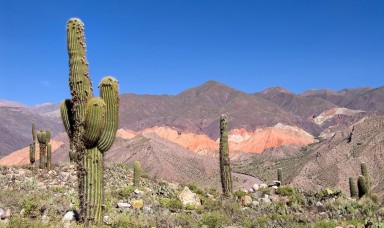 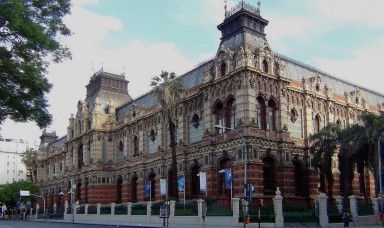 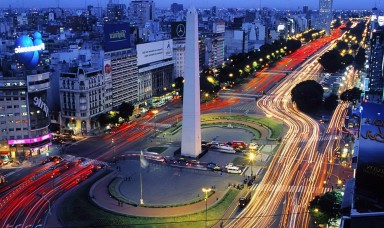 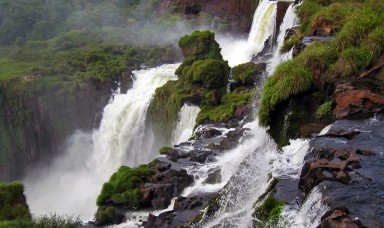 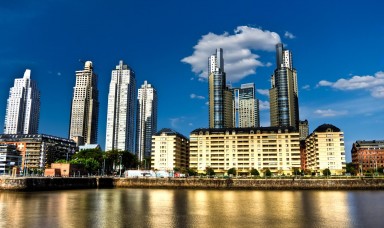 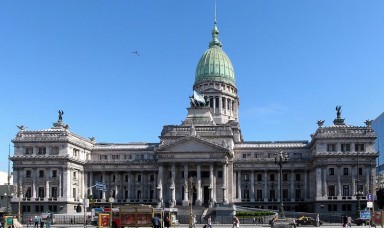 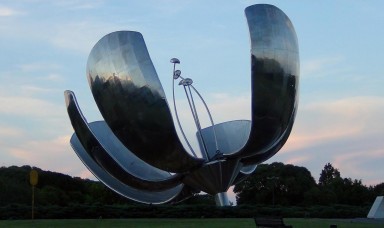 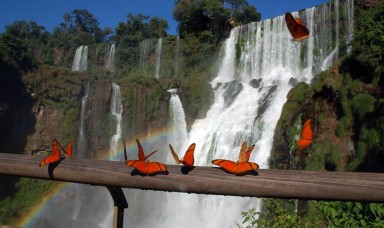 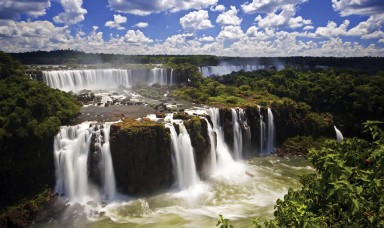 Argentina Listeni/ˌɑrdʒənˈtiːnə/, officially the Argentine Republic (Spanish: República Argentina [reˈpuβlika aɾxenˈtina]), is a federal republic located in southeastern South America. Covering most of the Southern Cone, it is bordered by Bolivia and Paraguay to the north, Brazil to the northeast, Uruguay and the Atlantic Ocean to the east, Chile to the west and the Drake Passage to the south.

Argentina is located in southern South America, with the Andes Mountains on the west and the South Atlantic Ocean to the east and south. Argentina has a total surface area (excluding territorial claims) of 2,780,400 km2 (1,073,500 sq mi);. Argentina has six main regions. The Pampas are fertile lowlands located in the center and east. The Mesopotamia is a lowland enclosed by the Paraná and Uruguay rivers, and the Gran Chaco is between the mesopotamia and the Andes. Cuyo is at the east side of the Andes, and the Argentine Northwest is at the North of it. The Patagonia is a large plateau to the south.

The highest point above sea level is in the Mendoza province at Cerro Aconcagua (6,959 m (22,831 ft)), also the highest point in the Southern and Western Hemisphere. The lowest point is Laguna del Carbón in Santa Cruz province, −105 m (−344 ft) below sea level. This is also the lowest point in South America. The easternmost continental point is northeast of Bernardo de Irigoyen, Misiones, the westernmost in the Perito Moreno National Park in Santa Cruz province. The northernmost point is at the confluence of the Grande de San Juan and Mojinete rivers in Jujuy province, and the southernmost is Cape San Pío in Tierra del Fuego.

The major rivers are the Paraná (the largest), the Pilcomayo, Paraguay, Bermejo, Colorado, Negro, Salado and the Uruguay. The Paraná and the Uruguay join to form the Río de la Plata estuary, before reaching the Atlantic. Regionally important rivers are the Atuel and Mendoza in the homonymous province, the Chubut in Patagonia, the Río Grande in Jujuy and the San Francisco River in Salta.

The 4,725 km (2,936 mi) long Atlantic coast varies between areas of sand dunes and cliffs. The continental platform, the Patagonian Shelf, is unusually wide; this shallow area of the Atlantic is called the Argentine Sea. The two major ocean currents affecting the coast are the warm Brazil Current and the cold Falkland Current. Because of the unevenness of the coastal landmass, the two currents alternate in their influence on climate and do not allow temperatures to fall evenly with higher latitude. The southern coast of Tierra del Fuego forms the north shore of the Beagle Channel. The National Parks of Argentina make up a network of 30 national parks in Argentina.

The proportion of people under 15 is 25.6%, somewhat below the world average of 28%, and the proportion of people 65 and older is relatively high at 10.8%. In Latin America this is second only to Uruguay and well above the world average, which is currently 7%. Argentina has one of Latin America’s lowest population growth rates, recently about 1% a year, as well as a comparatively low infant mortality rate. Its birth rate of 2.3 children per woman is still nearly twice as high as that in Spain or Italy, compared here as they have similar religious practices and proportions. The median age is approximately 30 years and life expectancy at birth is 77.14 years.

Provinces must be representative republics and must not contradict the Constitution and federal laws. Beyond this they are fully autonomous: they enact their own constitutions, freely organize their local governments and own and manage their resources. Some provinces have bicameral provincial legislatures, while others have unicameral ones.

During the Argentine War of Independence the main cities and their surrounding countrysides became provinces, though the intervention of their cabildos. The anarchy of the year XX] completed this process, shaping the original thirteen provinces. Jujuy seceded from Salta in 1834, to become the fourteenth province. In 1860, after seceding for a decade, Buenos Aires accepted the Constitution of 1853. The city of Buenos Aires became a federal territory in 1880.

The economy of Argentina is Latin America’s third-largest, with a Very High Human Development Index and a relatively high GDP per capita. It is classified as an upper middle-income economy by the World Bank.

The country benefits from rich natural resources, a highly literate population, an export-oriented agricultural sector and a diversified industrial base. Historically, however, Argentina’s economic performance has been very uneven, in which high economic growth alternated with severe recessions, particularly during the late 20th century, and income maldistribution and poverty increased. Early in the 20th century it was one of the richest countries in the world and the richest in the Southern hemisphere, though it is now an upper-middle income country.

Argentina is considered an emerging market by the FTSE Global Equity Index, and is one of the G-20 major economies.

High inflation has been a weakness of the Argentine economy for decades. Officially hovering around 9% since 2006, inflation has been privately estimated at over 30%, becoming a contentious issue again. The government has manipulated inflation statistics. The urban income poverty rate has dropped below the numbers of the 2001 economic crisis Income distribution, having improved since 2002, is still considerably unequal. Argentina began a period of fiscal austerity in 2012.

Argentina ranks 100th out of 178 countries in the Transparency International’s Corruption Perceptions Index for 2011. Reported problems include government corruption, lack of judicial independence, huge taxes and tariffs, and regulatory interference that undermines efficiency and productivity growth. The Kirchner administration responded to the Global financial crisis of 2008–2009 with a record public-works program, new tax cuts and subsidies, and the transfer of private pensions to the social security system. Private pension plans, which required growing subsidies to cover, were nationalized to shed a budgetary drain as well as to finance high government spending and debt obligations.

Argentine culture has significant European influences. Buenos Aires, its cultural capital, is largely characterized by both the prevalence of people of European descent, and of conscious imitation of European styles in architecture. The other big influence is the gauchos and their traditional country lifestyle of self-reliance. Finally, indigenous American traditions (like yerba mate infusions) have been absorbed into the general cultural milieu.